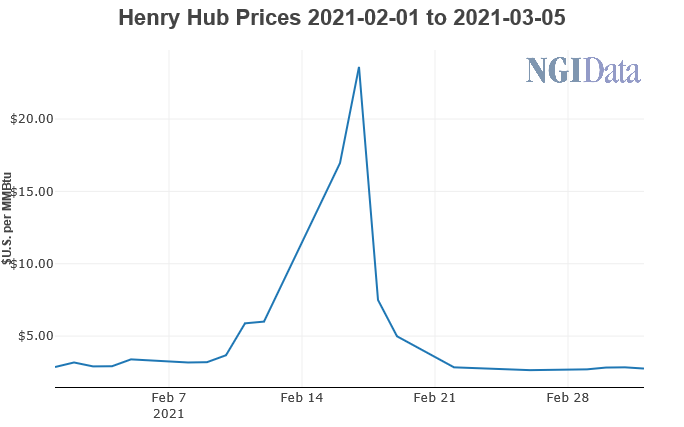 Winter Storm Uri brought the theme of energy security to the forefront in Mexico. Although the natural gas the country receives through pipeline interconnections with the United States is reliable, it’s not foolproof. Natural gas prices at U.S. hubs used in Mexico transactions for a few days went haywire. For one week in February, the feeling of helplessness and confusion among large gas users in Mexico was palpable. This has raised questions about what steps could have been taken to mitigate such an obvious vulnerability.

Mexico is not a unique case. There are many global examples where gas production is non-existent locally but where a strategy of diversification means the probability of interruption in the gas networks is almost zero. The basic principle of risk management is to have multiple alternatives. In natural gas, this means avoiding the market power that a single supplier can exercise, smoothing the effects of volatility with numerous sources at different prices, having route redundancy to reduce risks around infrastructure, and seeking that imported gas comes from different places to negate the effects of environmental phenomena.

Nationalist sentiment in Mexico has been exacerbated by this supply crisis, both in official discourse and in public opinion. Past administrations have been blamed for building infrastructure that aggravated dependence, placing national security in the hands of agents outside the homeland. Sadly, Uri occurred at the worst possible moment, when the nationalist energy discourse was already at its peak.

On other occasions in this column, I have mentioned that the causes of energy insecurity can be fortuitous or systemic. There is no doubt that the weather event in February was an “act of God” that no one could foresee or control. However, a concatenation of institutional elements, infrastructure conditions, and public policy reduced the maneuverability of commercial gas operations and transactions in Mexico that could have mitigated the effects of the extreme situation in Texas.

A systemic cause of insecurity is market power, and in this area the dominant role of the Comision Federal de Electricidad (CFE) and Petroleos Mexicanos (Pemex) subsidiaries in the international pipelines is a salient point. Another systemic cause of failures in security is the lack of natural gas storage infrastructure and the de facto suspension of the public storage policy in place since the previous administration. Added to these are the absence of true market centers that facilitate physical exchanges of gas from different systems, the lack of promotion of a secondary transport capacity market, and the neglect of open access rules. These factors make dependency on gas from the United States seem riskier than it actually is.

In the area of storage, the policy issued by the Energy Secretariat Sener during the previous administration was to have strategic storage of 45 Bcf in place by 2026. This policy has not been repealed by the current government, but there has been no progress in advancing it. This same policy also instructs Cenagas to take measures to have operational storage in place focused on maintaining the continuity of services and compensating for temporary imbalances. For this, Cenagas must use the existing liquefied natural gas (LNG) storage infrastructure in the country. Had it been available, an operational safety inventory could surely have largely alleviated the gas shortage observed.

The Altamira Storage and Regasification Terminal (TLA) actually proved its logistical value to the Mexican gas system when Hurricane Harvey struck Texas. The operating conditions of many internal pipelines were reduced and declarations of force majeure both by operators and intermediaries reduced imports by pipeline. The integrated system managed by Cenagas, the Sistrangas, saw reductions of more than 500 MMcf/d in imports in the Reynosa area and in Ciudad Camargo where the Ramones phase I system begins. The ability to nominate injections of regasified LNG from TLA kept pressure stable in the Gulf zone of the pipeline system and the volume exchanges between users allowed intermediaries to fulfill their contractual obligations.

This and other disruptive events on the other side of the border have had minor impacts thanks to TLA’s palliative contributions. This facility is one of the assets that most provides Sistrangas with operational flexibility despite not being part of the integrated system. Its two-tank storage capacity of 150,000 cubic meters can be used in sync with a regasification rate that can reach 760 MMcf/d in less than an hour from a standstill situation. Its geographical location coincides with multiple routes that start from Gasoductos del Noreste in the Reynosa area supplying users of all kinds in the area of the Gulf of Mexico and the center of the country.

Injection from the Net Mexico Pipeline was 1,705 MMcf/d on Feb. 11 and fell to 547 MMcf/d on Feb. 16. A timely intervention on Feb. 13 would have prevented the operating conditions on the Sistrangas from falling below the minimum permitted operating levels that led Cenagas to declare a critical alert, the first in more than eight years, on Feb. 16. However, the use of TLA does not follow an operational inventory operation philosophy. Its operation responds to a contractual arrangement that ultimately responds to the CFE, the anchor client on the project. Its inventories, filling and regasification rates obey the commercial interests of the state firm and certain operational requirements necessary to keep the plant in cryogenic conditions. Despite the fact that the public storage policy considers it a key element of operational storage, little progress has been made to this end. At least on a couple of occasions Cenagas has requested the integration of one of the tanks into the national system and a regulatory decision to motivate a rethinking of the current contractual arrangement, but the CRE has not approved it.

Cenagas has a mandate to ensure the continuity of gas services. CFE does not. In this sense, the criteria for reordering gas, and when and how to inject gas into the pipeline network should ensure the stability of operations and certainty in costs. This sort of event is precisely why a manager of the system is needed, an entity that serves the general interest of all users and not only their financial results or political orders.

When the worst of the gas supply crisis from Texas had passed, President López Obrador announced in one of his morning conferences that CFE would solve the problem through the contracting of LNG shipments. The announcement reinforced the narrative that the state through a state firm would save the situation. In reality, ship transits, port operations and unloading times do not occur immediately. By the time the gas had arrived, supply from Texas was already being restored.

But that does not imply that the Mexican gas network would no longer have problems. In the first week of March, Cenagas again announced the existence of problems in the line pack levels on the Sistrangas, asking users to keep their consumptions strictly to those scheduled under threat of being penalized. This happened without there being any problem north of the Rio Grande. So why? The contracted LNG finally reached the terminals en masse and had to be used. This implied a drastic decrease in CFE’s continental imports, a situation that changes the pressure conditions in the Sistrangas. And at the southern end of the system, one of the already multiple disagreements with private investors found a solution. The dispute between Pemex and Braskem Idesa ended, and Cenagas opened the gas tap to its main private client in the south. Abruptly, consumption that had stopped for months reappeared and with it a disruptive imbalance.

It is clear that the country’s energy security depends on Texas as one of its main sources of risk. However, more flaws in institutional design that prevent optimal use of existing infrastructure affect the energy security of users. The state’s stewardship envisaged in the legal framework fell on empowering the operators, Cenagas and in the power sector Cenace so that their efforts and resources were used not to favor a particular company, but to reduce risks based on technical criteria. But in the vision that today is hegemonic in the Mexican political scene, it is the state monopolies that take care of Mexico and its energy sovereignty.