A series of natural gas explosions in September 2018 that rocked three communities north of Boston, killing one man and injuring 22, has resulted in an expected criminal fine of $53 million and three years of probation for Columbia Gas of Massachusetts (CMA). 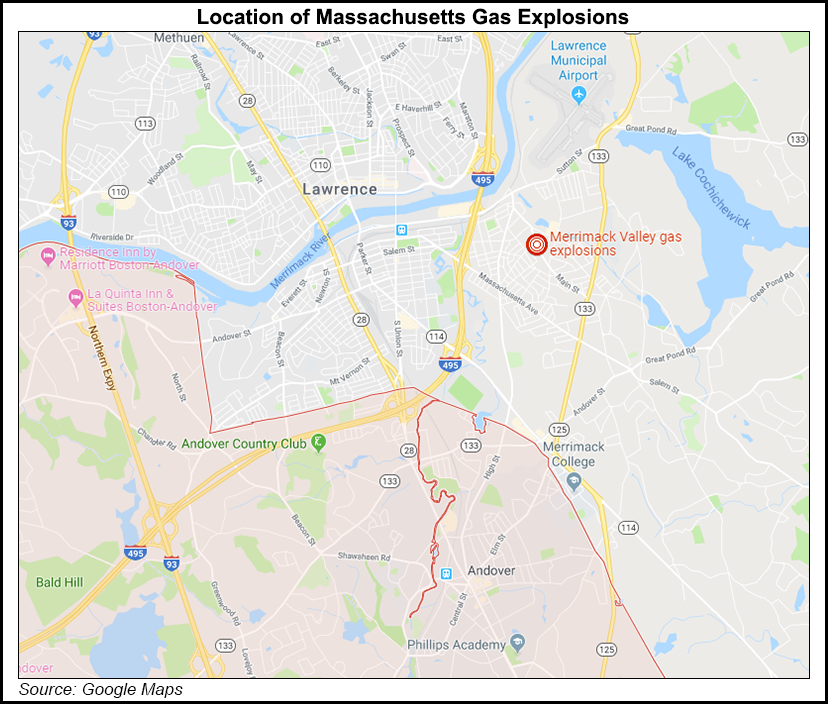 The NiSource Inc. subsidiary already had agreed in February to plead guilty and pay the $53 million fine. The fatal gas explosions two years ago damaged about 131 homes and businesses across Lawrence, Andover and North Andover.

“We expect utility companies operating in our communities to do so safely and responsibly,” said U.S. Attorney Andrew E. Lelling of the District of Massachusetts. “Instead, Columbia Gas acted with reckless disregard for safety by cutting corners and relying on lax protocols. The result was catastrophic — stealing one life, harming dozens and impacting the home and livelihoods of hundreds more.” The sentence “serves as little comfort to the victims, but is another step toward terminating Columbia Gas’s business in Massachusetts.”

Bay State Gas Co., which does business as CMA, was ordered to pay the fine by U.S. District Court Chief Judge F. Dennis Saylor IV. The fine represents twice the amount of profits that CMA earned between 2015 and 2018 from its pipeline infrastructure program called Gas System Enhancement Plan.

For the three-year probation period, which is to continue until CMA is sold to a qualified buyer, operations would be subject to a monitor to ensure compliance with federal and state safety regulations.

The sentence “makes clear that those entrusted with the public’s safety have a solemn obligation to make it their highest priority,” said regional special agent in charge Douglas Shoemaker of the Department of Transportation Office of Inspector General.

CMA “has finally been held criminally and financially responsible for their sheer greed and reckless disregard for public safety,” said special agent Joseph R. Bonavolonta, who is in charge of the Federal Bureau of Investigation (FBI) Boston Division.

“That said, we realize that the excruciating pain, suffering and heartbreaking loss of life the citizens of Merrimack Valley endured is beyond reparation. It is the FBI’s hope that the departure of Columbia Gas from Massachusetts will bring the residents of these cities and towns some much needed peace of mind.”

Lelling’s office also entered into a deferred prosecution agreement (DPA) with NiSource, which “has agreed to undertake their best reasonable best efforts to sell CMA after which NiSource and CMA would stop all gas pipeline operations in Massachusetts.”

In exchange for the DPA, NiSource also agreed to forfeit any profit it may earn from the sale of CMA and implement each of the safety recommendations from the National Transportation Safety Board.

The DPA with NiSource acknowledged that the Illinois company had made “substantial voluntary restitution payments” to the victims and agreed to seek to resolve all pending civil claims. Most of the $53 million fine is to be directed to the U.S. Justice Department’s Crime Victims Fund.