Federal and state investigators converged in Massachusetts Friday after at least one man was killed and up to 25 people were injured late Thursday when a series of unexplained natural gas explosions in the Merrimack Valley served by Columbia Gas damaged dozens of buildings and caused mass evacuations. 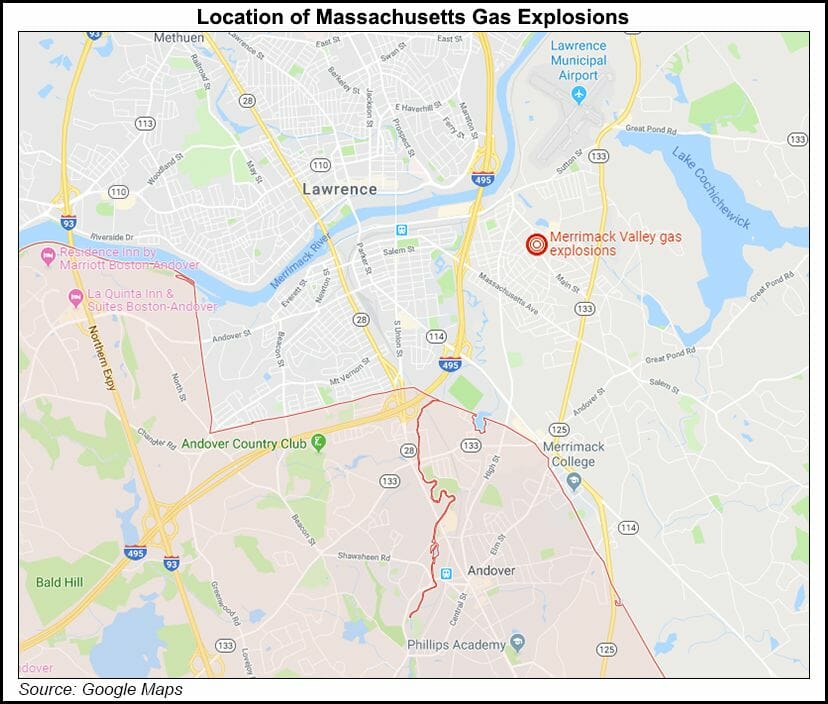 Emergency response teams responded to the incidents that affected residents in Lawrence, Andover and North Andover, communities about a half hour north of Boston. The three communities, near the New Hampshire border, together have more than 146,000 residents.

Columbia Gas of Massachusetts, a NiSource company, in an update posted to its website at 11:10 a.m. Friday, said, “What happened in the Merrimack Valley…was a tragic incident. We are saddened to learn of the death of a young man as a result of these events. Our thoughts and continued support are with those who have been injured and affected. We are focused on providing as much support as possible to our customers, residents and communities. We are grateful for the community’s patience, as well as the tremendous support we have received from our first responder and law enforcement partners.

“As part of response efforts, Columbia Gas crews need to visit each of the 8,600 affected customers to shut off each gas meter and conduct a safety inspection. More than 500 resources from several affiliated Columbia Gas companies and other utilities are currently mobilizing to provide assistance.”

The utility said it was “working with the appropriate authorities to investigate this incident in order to understand its cause.” Columbia Gas noted that it would be “an extended restoration effort, and we will work tirelessly to restore service to the affected customers.”

Initial reports to authorities began around 5 p.m. ET on Thursday, and the Massachusetts State Police said it had received at least 70 reports of fires and natural gas odors. By later in the evening, gas meters had been shut off by Columbia Gas at about 8,600 meters, and residents were ordered to evacuate their homes. About 400 people spent Thursday night in emergency shelters, according to the Massachusetts Emergency Management Agency (MEMA).

According to authorities, 18-year-old Leonel Rondon of Lawrence died Thursday after an explosion at one home caused a chimney to fall on a vehicle in which he was sitting. At least 25 other people reportedly were injured.

State Police estimated up to 38 homes were destroyed by the explosions and fires. Firefighters from the region on Thursday night responded to 60-80 structure fires in the three communities and about 150 emergency calls, according to MEMA chief Kurt Schwartz.

“It looked like Armageddon, it really did,” Andover Fire Chief Michael Mansfield told reporters. “There were billows of smoke coming from Lawrence behind me. I could see pillars of smoke in front of me from the town of Andover.”

In nearby Methuen, which responded to the incidents, Police Chief Joseph Solomon said he thought about 25 homes were on fire in Lawrence. Solomon told reporters there were so many fires “you can’t even see the sky.”

Emergency response workers from surrounding communities worked through the night to help extinguish fires and care for the injured. Andover officials told NGI that 35 fires in their town had been extinguished by 8:30 p.m. Thursday. Andover had struck a 10-alarm response, the maximum, and it deployed 50 fire vehicles and 10 ambulances.

No additional gas-related emergencies had been reported on Friday.

According to the State Police, the incidents initially were being blamed on over-pressurized gaslines. Columbia Gas has been upgrading its gas system across the state. The State Police Fusion Center said the gas explosions and reports were “spread across a wide swath” of South Lawrence, North Andover and in North Lawrence.

State Police said it was “far too early to speculate” on the cause of the incidents. A joint investigation “will be conducted when situation is stabilized.” The Massachusetts Emergency Management Agency blamed the fires on gas lines that had become over-pressurized but also said investigators were still examining what happened.

Experts from state regulatory agencies, as well as federal officials from the National Transportation Safety Board (NTSB) and the Department of Transportation’s Pipeline & Hazardous Materials Safety Administration were on scene to investigate the incident.

The NTSB plans to look at the design of the pipeline system, maintenance and upgrades that have been done, as well the safety record of the pipeline operator, a spokesperson said.

One incident may have been prevented by a State Police helicopter crew. At about 11 p.m. ET Thursday, troopers in helicopter MSP Air 5 of the Massachusetts State Police Air Wing “were working over Lawrence, providing overwatch support during the ongoing response after the gas explosions and fires,” officials said.

Tactical flight officer and Trooper Eric Fairchild was monitoring the aircraft’s forward looking infrared camera “when he observed an anomaly under the pavement at the intersection of Broadway and Andover St.” The flight crew then advised the Lawrence Fire Department, and firefighters “responded and discovered a major gas leak under the pavement.”

National Grid, the electricity provider in the three communities, shut off electric service to about 18,000 customers on Thursday night, as requested by emergency officials, and many remained without power on Friday. “Safety is our top priority,” it said. “National Grid’s gas system is operating normally and is not impacted by the situation in the Merrimack Valley.”

Authorities late Friday had not said when residents would be allowed to return to their homes.

“We don’t know what caused the explosion or what the ramifications will ultimately be,” Genscape Inc. natural gas analyst Eric Fell told NGI. “It’s awful for the people affected, but a pretty small impact in terms of the gas market.”

Columbia Gas of Massachusetts, he said, serves a residential/commercial (res/com) load “in a fairly small area around Lawrence, MA.” Recent deliveries to the local distribution company from Tennessee Gas Pipeline “have been around 10,000 MMBtu, or 0.01 Bcf/d. However, res/com demand spikes when it gets cold and scheduled deliveries to this meter peaked at around 80,000 MMBtu last winter,” Fell said.

Utilities including Eversource were sending technicians and equipment to help inspect all the gaslines in the affected areas. Eversource said it had conducted a safety “stand down” on Friday morning with all of its gas crews to reinforce their commitment to safety and their gas operating procedures.

Gov. Charlie Baker on Friday afternoon declared a state of emergency and authorized the chairman of the Massachusetts Department of Public Utilities (DPU) to authorize Eversource to take management control over the coordinated effort “to safely restore utility services in South Lawrence, Andover and North Andover.”

State law sets up a process for the chair of DPU to issue orders to any utility when authorized by the governor during a state of emergency “to assure public safety through the priority restoration of service.”

Baker, who is running for re-election, on Friday also suspended his campaign over the weekend to coordinate the response by state and local emergency management officials.

Also sending utility personnel to help with restoring service was Norwich Public Utilities (NPU), which general manager John Bilda said was “ready and willing to respond to this unprecedented event in Massachusetts, sending a number of our talented personnel to assist with this critical work. NPU’s track record of helping those in need — whenever and wherever we can — is a source of great pride for the men and women of our organization.” NPU said its assistance was to last through the weekend.

In addition, close to 50 field personnel who work in gas operations for New York’s Consolidated Edison Inc. and Orange and Rockland Utilities Inc. were on their way Friday to assist with turning off the gas meters, a step necessary before gas could be restored to pipelines serving the affected neighborhoods.

Management for the American Gas Association (AGA), which represents more than 200 companies that deliver gas throughout the United States, said, “Our hearts go out to those who are suffering and have lost loved ones and homes as a result of the tragic incidents in Massachusetts. Safety is at the very core of the work we do as an industry and natural gas utilities work tirelessly to help ensure the safety of their customers, communities and employees.

“Right now, our efforts and attention are focused on the communities and people affected by this tragedy,” AGA said. Once the regulatory agencies release their findings, “and we better understand the root cause of the incident, AGA is prepared to work with our members, state and federal pipeline safety regulators and other interested stakeholders to take additional actions to preserve the safety of the natural gas delivery system and the communities we serve.”

On its website, Columbia Gas had posted a note to Massachusetts customers that it was upgrading natural gas lines “in neighborhoods across the state” to enhance safety and reliability.

To assist with the recovery, the American Red Cross established shelters in Lawrence and Andover that also accommodate pets. The Salvation Army and other local agencies also were helping with services.