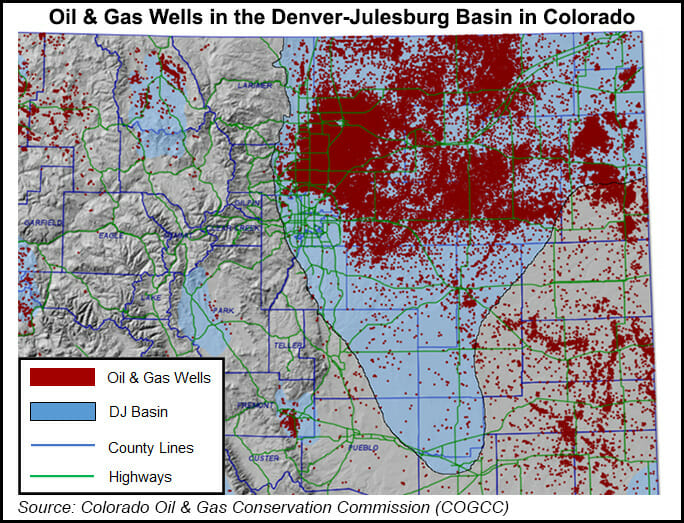 State Senate Bill (SB) 181, enacted in 2019, is designed to limit the effects of emissions and environmental disruptions from oil and gas development.

“As the first year of Oil and Gas Development Plan (OGDP) approvals after the Mission Change rules went into effect on January 15, 2021, the data set included in this report is small – it is limited to the seven approved OGDPs,” said COGCC Director Julie Murphy in a letter to Commissioners included in the report.

“This report focuses on presenting summaries of the data collected so far and identification of data fields that will inform future evaluation of cumulative impacts.”

The annual report is required by COGCC under a rule enacted in November 2020 that took effect last year. Gov. Jared Polis signed SB 181 into law in April 2019, enabling the COGCC to enact rules to “regulate the development and production of the natural resources of oil and gas in the state of Colorado.” The COGCC prepares the report in consultation with the Colorado Department of Public Health and Environment (CDPHE).

The state has since pursued some of the nation’s toughest environmental regulations, including Rule 903, which made it the second state in the country to prohibit routine venting and flaring of natural gas by upstream operators.

The report highlights air quality data collected in the most active oil and gas region in the state, the Denver-Julesburg (DJ) Basin.  For example, a single well in the DJ was found to produce 0.38 tons/year of methane and 1.37 tons/year of volatile organic compounds, researchers noted.

“Some adverse impacts [of mitigation measures] will have a beneficial offset, as presented below,” the report notes, citing a graph displaying decreases in well count, location acreage, oil tank counts, and water tank counts in the DJ Basin.

The Greenhouse Gas (GHG) Roadmap included in the report further notes a 2021 GHG analysis published by the Air Pollution Control Division of the CDPHE in September last year. Notable findings from that report showed Colorado’s GHG emissions decreased by 9% between 2005 and 2019.

The report additionally features some of the innovative technologies and measures used by the oil and natural gas industry to minimize cumulative impacts. They include aerial surveys that monitored methane emissions last July and September.

The full 2021 Report on the Evaluation of Cumulative Impacts can be found here.