CNX Resources Corp. signaled a cautious approach for its operations this year, laying out a flexible plan for “minimum” activity that could increase if the natural gas outlook improves. The company also said Tuesday it successfully killed an unruly Utica Shale well in southwest Pennsylvania. 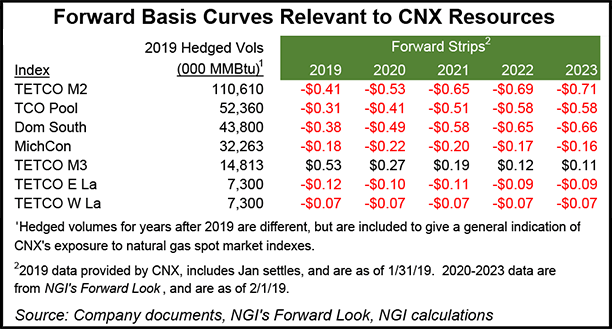 CNX is the latest of the Appalachian crop to exercise restraint as the broader market is again expected to be flooded with gas this year. That dynamic is weighing on longer-term prices. Shareholders too are keeping a close eye out for better returns and capital discipline. So far, EQT Corp., Antero Resources Corp., Gulfport Energy Corp. and Chesapeake Energy Corp. are among the leading Appalachian operators that have responded with plans to reduce activity or spending.

The management team plans to keep spending and production volumes relatively flat. Drilling and completion spending has been set at $575-625 million, while overall spending, including land, water and midstream costs, are pegged at about $1 billion, roughly in line with 2018 spending. CNX Midstream Partners LP is also responsible for more than $200 million of the consolidated budget.

Production for the year is forecast at 495-515 Bcfe, or a 5% year/year increase based on the midpoint. Management stressed, however, that their plans for the year are merely a floor from which to work.

“We have a solid minimal level of activity, which is largely hedged,” said CEO Nicholas Deluliis, who added that “we consciously set up the business so we don’t commit ourselves beyond that, and we’ve got the flexibility to do more if and when we deem it appropriate.”

Senior Vice President Andrea Passman of engineering and operations told analysts during a call to discuss year-end earnings last week that the company would continue utilizing the four rigs and three completion crews that were working at the end of 2018. CNX plans to employ that fleet as needed, but for now that the company sees no need to pursue additional activity.

Production jumped in the fourth quarter by 14% year/year and sequentially to 136 Bcfe. CNX also set a new daily volume record during the quarter when production reached 1.64 Bcfe/d. The Marcellus Shale drove the volumes, accounting for 87 Bcfe, while the company produced 34.1 Bcfe in the Utica Shale. For the full year, including divested volumes, CNX produced 507 Bcfe, up 25% from 2017.

Deluliis also said this year’s plans would depend on how Utica development evolves. CNX could potentially allocate billions of dollars over the coming years, he said. The company has been increasingly focused on the formation. He cautioned that developing the 652,000 acre position on a wider scale in a way many others have not — in Ohio and Pennsylvania — carries with it a risk.

“We’ve seen that with pioneers in other shale fields like the Barnett, as well as, frankly, in our basin, with the Marcellus,” he said. “So, we want to be judicious and astute in how we allocate capital from the get-go.”

Management also has previously talked at length about the “stacked pay factory” it envisions for the future. In particular, CNX has discussed how well pads that target both the Marcellus and Utica, or even the Upper Devonian shales and the Point Pleasant formation in places like southwest Pennsylvania, may redefine field economics and its priorities.

Passman described a “methodical and steady” program in the Utica that continues driving the company up “the learning curve” as 2019 gets underway.

At the Shaw pad in Westmoreland County, PA, the company experienced a pressure anomaly during hydraulic fracturing on a well late last month that forced crews to stop all operations. Pressure in nearby conventional wells increased, suggesting communication between them and the Shaw 1G. CNX was forced to flare gas from nine nearby vertical wells to relieve the pressure. No injuries or environmental impacts occurred. A well control team successfully contained the well on Monday, CNX said.

The three other Utica wells on the pad are still shut-in as the incident is investigated. The wells will also be monitored.

While it’s not the first time the company has hit snags in the Utica in either state, the incident demonstrates the challenges ahead in the deep, dry Utica of Pennsylvania, where the company drilled its first Utica well in 2014.

To the south of the Shaw pad is the Bell Point 6 deep Utica well, which Passman said is performing in line with the company’s type curve, holding steady at 21 MMcf/d since October, which she said is “bigger than any well that I ever saw when I worked onshore in the Gulf of Mexico.”

CNX drilled its longest lateral ever in the Marcellus during the fourth quarter at a length of 15,000 feet. The company also laid out plans on Thursday to construct a 24-mile water pipeline that would deliver 120 barrels per minute from the Ohio River in West Virginia to its Richhill area in southwest Pennsylvania. The project would help further reduce costs associated with truck transport if it comes online in 4Q2019 as anticipated.