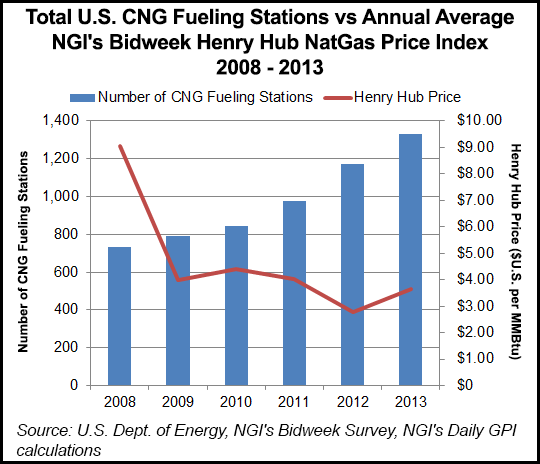 Clean Energy CEO Andrew Littlefair announced a series of deals for stations, expansions, customized mobile fueling and fuel for heavy duty trucking, transit and refuse market segments on the opening day of the Alternative Clean Transportation (ACT) Expo in Long Beach, CA. In an opening session, he told the audience that the United States has “natural gas running out of our ears; we’re going to have a lot of cheap natural gas for a long time.”

According to Littlefair, there are about 4,000-5,000 natural gas vehicles (NGV) added worldwide each day. He acknowledged that the big growth in passenger NGVs continues to be in Europe and Asia while the U.S. natural gas transportation sector continues to stress fleets.

Littlefair told the ACT audience that “economics are now on our side.” That hasn’t always been the case. In the 1990s, the only way to convert refuse trucks to NGVs was to get a blanket mandate for large fleets to switch to natural gas from the Southern California Air Quality Management District.

“That was really tough because we didn’t have the economics, and we didn’t have the right engine technology, but it spurred the technology to get the engines and costs were brought down,” he said. Today, 60% of all refuse trucks ordered run on natural gas, and 35% of the new transit buses are CNG or LNG, he said.

In San Jose, CA, Clean Energy is building a fourth CNG fueling station for Garden City Sanitation as it converts its entire fleet to CNG; it would consume about 366,000 DGEs supplied by Clean Energy. Clean Energy also plans to provide 10 LNG-fueled trucks for the UPS fueling facility in Jacksonville, FL.

The number of CNG stations nationwide has increased slowly over the past six years, from 735 in 2008 to 1,331 last year, according to U.S. Department of Energy data.