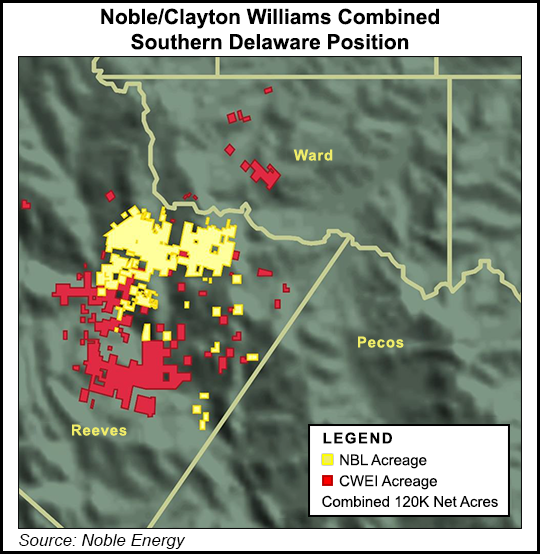 Acquired assets include 71,000 contiguous net acres in the core of the Southern Delaware Basin adjacent to Noble Energy’s original Reeves County holdings in Texas, an additional 100,000 net acres in other areas of the Permian Basin, and more than 300 miles of oil, natural gas, and produced water gathering pipelines. Production on the assets totals 10,000 boe/d.

The Noble-Clayton Williams transaction was announced in January.

Rig activity on the acquired acreage is planned to accelerate from one rig currently to two rigs by the end of the second quarter and three by year-end, the company said. Including the three rigs currently running on Noble acreage, this will bring the company’s total Delaware rigs to six entering 2018.

The vast majority of the Delaware Basin acres acquired have been dedicated for infield crude oil, natural gas and produced water gathering to the Blanco River development company, which is owned 75% by Noble Energy and 25% by Noble Midstream Partners LP, Noble said. Additionally, infield gas gathering has been added to the existing crude oil and produced water dedication to Blanco River on Noble’s original 47,000 Delaware Basin acres.

Noble Energy’s first central gathering facility within the Delaware Basin, operated by NBLX, is progressing to a mid-year start-up, the company said.