A coalition of environmental groups has filed a lawsuit to jettison a federal plan that would allow oil and gas drilling on public lands in southwestern Colorado. 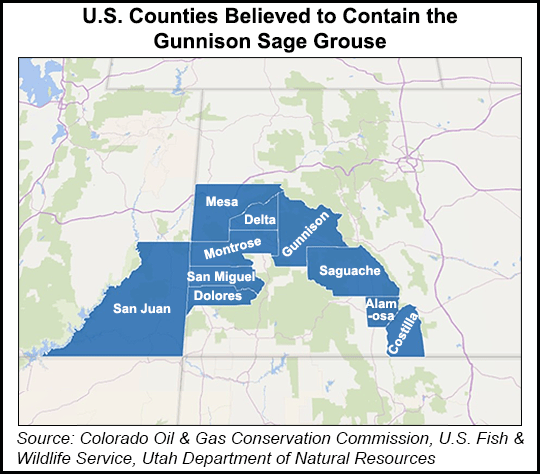 The six western U.S. groups filed the lawsuit against the Department of Interior’s Bureau of Land Management (BLM) in U.S. District Court in Denver. The plaintiffs claim that an expansion of oil and gas drilling on Colorado’s Western Slope ignores environmental threats and would endanger Gunnison sage grouse.

The BLM “failed to take a hard look at impacts affecting the survival and recovery of the threatened Gunnison sage grouse and its habitat” and “failed to define and take action to prevent unnecessary and undue degradation of the lands, particularly in the context of climate impacts,” the environmental groups claim in the lawsuit.

At issue is the updated Uncompahgre Field Office Resource Management Plan (RMP), released in April. The RMPserves as a guide for energy development and mining over the next two decades on 1.7 million acres, including one million acres of subsurface minerals and nearly 750,000 surface acres. The RMP would allow drilling on more than half of the public lands. Coal mining would be permitted on another 371,000 acres.

BLM said it does not comment on pending litigation. When it released the updated plan in April, however, the agency said it “incorporates a balanced level of protection, restoration, enhancement, and use of resources to meet natural resource management objectives and the needs of local communities.” It estimated that the RMP could generate 950 jobs and grow the regional economy’s output by $2.5 billion.

The agency also said that the RMP includes extensive mitigation requirements for surface impacts to animals such as elk and deer, and it prevents surface occupancy on 30,000 acres of habitat near rivers and streams. BLM said it addressed concerns of Colorado Gov. Jared Polis, environmentalists and residents.

BLM intends to “move forward in a way that balances use, resources and conservation stewardship,” the agency’s Greg Larson, Uncompahgre field manager, said at the time. “Our partners and stakeholders were integral in this effort, and the BLM will continue to work hand in hand with them to support local economies while maintaining the quality of life and recreational opportunities we all enjoy.”

In their lawsuit, however, the groups claim that BLM did not do enough. They alleged that the expanded drilling would hasten climate change and impede on endangered species, including the razorback sucker, greenback cutthroat trout and, most notably, Gunnison sage grouse, which live only in Western Colorado and Utah. The government designated the grouse as threatened in 2014, following years of rapid decline.

“The Gunnison sage grouse is presently experiencing catastrophic declines range-wide,” said attorney Talasi Brooks, who represents one plaintiff, the Western Watersheds Project. “The plan’s business-as-usual approach falls far short of the urgent action required to preserve this species from the effects of rampant livestock grazing and oil and gas development.”