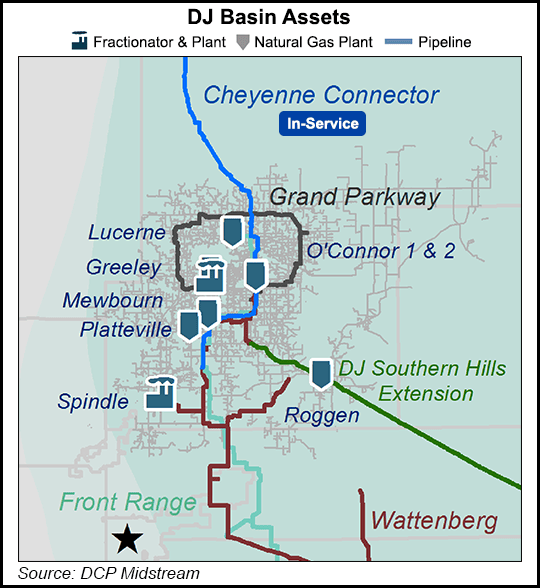 CEO Wouter van Kempen of Denver-based DCP referred to a recent report from the governor in which he noted that both industry and environmental groups committed to him “a willingness to let Senate Bill (SB) 181, the landmark oil and gas legislation enacted in 2019, work through the regulatory process.” Both groups, Polis wrote in a July Colorado Politics article, “have committed to withdraw current ballot measures filed for 2020 and have expressed a willingness to work together to prevent future ballot measures through 2022.”

Polis wrote in the journal that conflicts among the various constituencies around oil and gas development have resulted in expensive political and legal battles. SB 181 established the Colorado Oil and Gas Conservation Commission (COGCC), a full-time, professional overseer of the regulatory framework. The governor said the COGCC must be allowed to do its job. “Therefore, I will actively oppose ballot initiatives related to oil and gas extraction in 2020 and 2022 from both sides,” Polis wrote. Disagreements about projects now are to be resolved by the COGCC.

During a call with analysts last week to discuss second quarter earnings, Kempen said the shift in political tone and posture created much-needed regulatory certainty for oil and gas companies active in the Denver-Julesburg Basin (DJ).

“We’re excited to see the potential of the DJ Basin now fully unleashed,” Kempen said. “Colorado is open for business and will continue in its essential role, providing our nation with a critical energy supply we demand.”

“While this doesn’t guarantee the opposition won’t attempt to gather signatures in two years, it is clearly the…most public support the industry has had from the governor’s office in recent memory,” Brookman said on the company’s earnings call this month. The support “should go a long way and limit the outside funding and support that is necessary to run an anti-industry campaign.”

“These projects, in addition to the recently in-service Southern Hills extension have now eliminated all logistic constraints” in the DJ Basin,” Kempen said. “With the political risk within Colorado substantially minimized by the state’s top elected officials and our final projects coming online, the DJ Basin is ready to realize its full potential.”

During the second quarter, meanwhile, DCP focused on reining in costs and boosting cash flow amid price pressure imposed by the coronavirus pandemic.

“Our sustaining capital will be more heavily weighted to the back half of the year and our growth capital will be significantly lower for the remainder of 2020 as we spent the vast majority on owned projects in the first half of the year,” CFO Sean O’Brien said on the call. The company now expects spending to “trend to the high end of our $150 million to $190 million range, but still down approximately $400 million from our original guidance,” prior to the pandemic.

Distributable cash flow was $220 million for the second quarter, up 27% from the year-ago period.