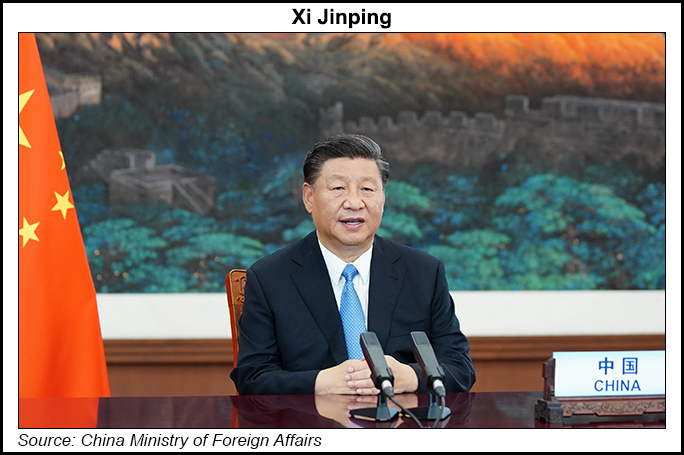 In an address to the United Nations (UN) General Assembly focused largely on the need for a coordinated global response to the Covid-19 pandemic, Xi said China will scale up its Intended Nationally Determined Contributions under the UN global climate agreement, aka the Paris Agreement, from which the United States formally withdrew at the direction of President Trump.

“We call on all countries to pursue innovative, coordinated, green and open development for all, seize the historic opportunities presented by the new round of scientific and technological revolution and industrial transformation, achieve a green recovery of the world economy in the post-Covid era and thus create a powerful force driving sustainable development.”

An accelerated push toward decarbonization by the superpower could have major implications for global energy markets.

However, despite the scale of China’s new commitment, “I just can’t see how this announcement is bad for LNG over the intermediate term, and even the short side of the long-term,” said NGI’s Patrick Rau, director of strategy & research. “They’re already in a movement to try to get gas as a percentage of their total energy mix up, because right now it’s just so much coal.”

Coal accounted for 64% of China’s electricity mix in March 2020, according to the International Energy Agency (IEA).

The target year of 2060 also gives China some breathing room compared to the European Union’s goal of being carbon neutral by 2050, Rau said. A 20-year LNG supply contract signed in the 2020s would expire well before China’s deadline, he noted.

The country’s oil demand, meanwhile, is expected to average 13.6 million b/d in 2020, versus13.7 million in 2019, according to IEA’s latest Monthly Oil Market Report.

Wood Mackenzie’s Gavin Thompson, Asia Pacific vice chair, added, “Of course, big questions remain. Firstly, China’s definition of ‘carbon neutrality’ is not well defined from the short announcement. Further, no roadmap was offered as to how this will be achieved.”

“We expect China will need to deploy over a billion tons [of] carbon, capture and storage capacity across its power and industrial sectors,” Sharma said. “These efforts will need to start much earlier and at a higher scale to deliver” on carbon neutrality by 2060.

Thompson said China’s upcoming 14th five-year plan “has the potential to be the most important document in global energy market history…Increased investment in wind, solar, electric vehicle and battery storage technology deployment will almost certainly feature, and we can expect support for green hydrogen and carbon capture technology.”

Thompson said, “if any country can achieve such ambitious goals it will be China. Strong state support and coordination have proven extremely effective at reaching economic goals; if this is now directed toward climate change then China is capable in transforming its carbon emissions trajectory over the coming four decades in exactly the same way it has transformed its economy over the past 40 years.”

During a press conference on Wednesday, China foreign ministry spokesman Wang Wenbin contrasted China’s stance on climate with that of the United States, which “as the world’s largest emitter of greenhouse gases in cumulative terms, not only failed to ratify the Kyoto Protocol, but also pulled out of the Paris Agreement. It has rejected binding quantified emissions reduction targets for itself and refused to take even the minimum steps to protect the planet.

“By doing so, the U.S. has completely disassociated itself from the global carbon emissions system and arrangements, and seriously held back such global processes as emissions reduction and green and low-carbon development.”