U.S. liquefied natural gas (LNG) exports to China have ramped up this year but remain far below the levels specified in a phase one trade deal signed in January by the two countries to try to improve trade relations. 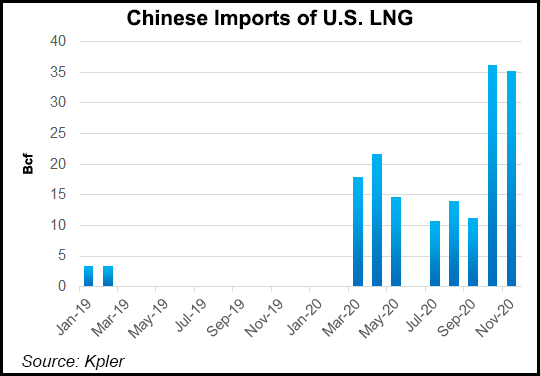 Since U.S. LNG exports to China resumed in March after a hiatus of more than one year, the East Asian country has imported, or is scheduled to import, a combined 49 U.S. cargoes with a total volume of 7.92 million cubic meters, equivalent to about 168 Bcf of natural gas, according to data intelligence firm Kpler. Additionally, 18 LNG vessels with U.S. cargoes have not declared their destinations, so some of those could go to China.

That compares with two U.S. LNG deliveries to China in 2019 with a combined volume equivalent to 6.9 Bcf and 26 exports in 2018 equivalent to about 90.5 Bcf, according to the U.S. Department of Energy.

“When looking at Chinese LNG imports, there is a strong seasonality traditionally resulting in higher deliveries during [the] November-January period, and it is confirmed by what we are seeing this year as well,” Kpler senior market analyst Ilya Niklyaev told NGI.

He mostly attributed the significant ramp-up of U.S. exports since October to China buying supplies for winter demand and “very high exports from the U.S. in general.” Since Dec. 4, combined gas flow to the six U.S. LNG plants has topped 11 Bcf/d.

Kpler expects “a big increase” in U.S. LNG deliveries to China in December, Niklyaev said, noting that there are multiple vessels headed to the Far East with U.S. supplies that could ultimately end up in China.

He pointed out that the U.S. still accounts for a small portion of China’s overall LNG imports, with producers in Qatar and Australia benefitting the most from Chinese winter buying.

Despite the increased U.S. LNG deliveries to China, the phase one targets “are wildly out of reach for 2020 and never really had much chance of being achieved, at least on the energy side, because of the huge dollar amounts involved,” Poten & Partners’ Jason Feer, global head of business intelligence, told NGI.

China in the phase one deal committed to buy $200 billion of American goods over the next two years, including $52.4 billion of energy products including LNG, crude oil, refined products and coal.

Reuters recently calculated that in the first 10 months of 2020, China’s purchases of U.S. crude oil, LNG, propane, butane and other energy products totaled $6.61 billion, or about 26% of this year’s $25.3 billion target.

The Covid-19 pandemic has significantly reduced energy demand throughout the world and many analysts are optimistic that vaccinations will improve demand next year.

China in March began accepting applications from domestic LNG buyers for waivers of the 25% tariff on U.S. LNG imports it imposed in June 2019, but Feer said the recent rise in Chinese purchases of U.S. cargoes has mostly been driven by rising global LNG prices.

“U.S. volumes are available and competitive at current winter prices, and I think that is the main driver of Chinese imports,” Feer said. “I don’t think there are any reliable estimates of what next year would look like, though again, price will be a driver. I think there is an interest on the part of the Chinese government in increasing imports from the U.S. and energy supplies and other commodities,” like agricultural products, “are a fairly easy way to do that.”

Current spot prices for January delivery to northeast Asia are $7.82/mmBtu, after being about $2/mmBtu in April-July, according to NGI data.

The U.S.-China trade dispute will not likely be quickly resolved after Joseph R. Biden takes over the U.S. presidency next month, as “Biden has said that he will continue to press the Chinese on their trade practices,” Feer added.

U.S. LNG is currently competitive in China even with tariffs, “but that could change as we move into spring and prices fall,” Feer said.

“In highly commoditized markets, the margins are too thin to allow supplies from countries under tariffs to compete,” he said. “I would assume that the Biden administration would be looking for ways to unwind these competing tariffs, especially if it leads to increased trade and potential job creation in the United States.”

The Center for LNG’s Charlie Riedl, executive director, told NGI that it is too early to know if Biden would quickly address the trade dispute with China.

He agreed that higher prices have spurred more U.S. LNG deliveries to China but added that resolution of the trade dispute would help U.S. LNG developers sanction more capacity by potentially paving the way to sign more long-term deals with China.

China is one of the largest gas importers in the world, but so far only one company has signed long-term deals for U.S. LNG. In February 2018, state-owned China National Petroleum Corp. signed agreements to buy from Cheniere Energy Inc.