Chevron Corp. CEO Michael Wirth during the annual investor meeting on Tuesday said the supermajor’s message to investors could best be summed up in four words: higher returns, lower carbon. 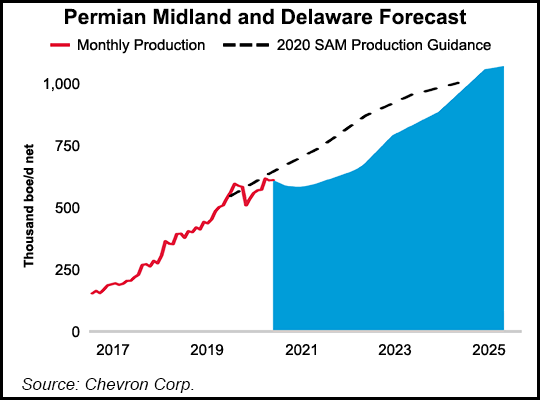 Wirth, together with his executive team, laid out a broad global development plan centered around increasing returns on capital employed while slicing the carbon intensity of the operations.

“We’re building on our track record of capital and cost discipline to deliver higher returns,” Wirth said during the virtual meeting. “And we’re taking action to advance a lower carbon future.”

The San Ramon, CA-based operator reaffirmed its 2021-2025 capital expenditure guidance at $14-16 billion a year. The synergies expected from combining into the fold Noble Energy Inc. operations have been doubled to $600 million, which is forecast to contribute to an expected 10% reduction in 2021 operating expenses from 2019.

If Brent oil prices were to average $50/bbl, Chevron estimated that the combination of more capital efficient investments and lower costs would double the return on capital employed and lead to a 10% compound annual growth rate for free cash flow by 2025.

“The path to increase return on capital employed is straightforward,” said CFO Pierre Breber. “Invest in only the highest-return projects and operate cost efficiently. Capital discipline and cost efficiency always matter. We have the portfolio and investments that position us to increase returns and grow free cash flow.”

Over the next five years, Chevron is setting its cap to plow more investments into other strategic investments, particularly the Permian Basin.

“Our Permian Basin asset is advantaged relative to others,” said Upstream chief Jay Johnson, executive vice president. “The long-term outlook is positive and capital efficiency is improving. We expect to grow production while generating strong free cash each year along the way.”

Also in the mix is growth from two other world-class onshore unconventional targets, the Duvernay in Canada and the Vaca Muerta in Argentina, Johnson said.

In Kazakhstan, meanwhile, where a major expansion is underway, capital is set to decline. Chevron is the largest private oil producer in the country, with stakes in two of the largest oil producing fields, Tengiz and Karachaganak. The Future Growth Project-Wellhead Pressure Management Project, aka FGP-WPMP, is underway to boost Tengiz production capacity and apply sour gas injection technology to increase reservoir recovery.

The FGP-WPMP project is 81% complete, Johnson said. Remobilizing the project staff continues to progress, following a slowdown because of the pandemic.

“We remain focused on sustaining our pandemic mitigation measures and increasing productivity at Tengiz,” he said. “Executing our 2021 work program amidst the pandemic will be an important signpost for the project’s budget and schedule.”

Chevron now has set lower carbon dioxide (CO2) reduction targets that it expects to achieve in 2028, with zero routine gas flaring by 2030. The new targets, aligned with the second stock-take period under the United Nations global climate accord, include all of Chevron’s production on an equity basis.

Compared to 2016 levels, Chevron is targeting a combined 35% reduction in carbon intensity reductions by 2028. Overall flaring intensity is set to fall by 65%, and methane intensity is forecast to be cut by half.

“Our energy transition strategy is focused on actions that are good for both society and shareholders,” said Strategy & Sustainability chief Bruce Niemeyer, vice president. “Achieving our 2028 goals is expected to keep Chevron a top quartile oil and gas producer in terms of carbon intensity.”

Renewable energy and carbon offsets programs also have been updated. In addition, Chevron is earmarking funds for low carbon technologies that include hydrogen and carbon capture utilization and storage.

Earlier this month Chevron also clinched a bioenergy partnership with Schlumberger Ltd. and Microsoft Corp. for a project in California designed to qualify as carbon negative.

On Tuesday Chevron released its third climate report aligned with the Task Force on Climate-Related Financial Disclosures (TCFD). The TCFD was created six years ago by the Financial Stability Board to develop consistent climate-related financial risk disclosures for stakeholders.

The latest report “details how Chevron plans to deliver long-term value in a lower carbon future,” Wirth said. “We expect to invest more than $3 billion in the coming years to advance our energy transition strategy.”

With its flexible capital program, Chevron expects to reward investors in any commodity price environment, according to Wirth.

At a Brent oil price average of $60/bbl, the company over the next five years expects to earn double-digit returns on capital and to generate cash, above its dividend and capital spending, of more than $25 billion. If Brent averages $40 over the next five years, Chevron is expecting the net debt ratio to peak at around 35%, while sustaining the dividend.

“Even through these challenging times, Chevron maintained its financial strength and capital discipline,” Wirth said. “Our strategy positions Chevron to return cash to shareholders today and into the future.”