Capital spending cuts are coming across the energy spectrum, with Chevron Corp. and Schlumberger Ltd. among the latest to respond aggressively to the unprecedented downturn in the oil and gas industry. 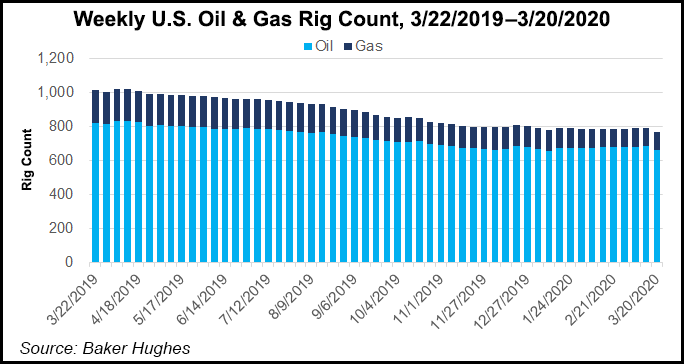 San Ramon, CA-based Chevron has cut capital expenditures (capex) by 20% across the portfolio, with most of the upstream reductions in the Permian Basin. The revamped plan now is forecasting Permian output by year’s end to be at 125,000 boe/d, or 20% below initial guidance.

The reduction to $16 billion in capex includes a $2 billion cut in unconventional spending, mostly in the Permian. Another $700 million has been sliced from upstream projects, with $500 million struck from the upstream base business across the U.S. and international assets. In addition, $800 million is being cut from the downstream and chemicals budget.

CEO Michael Wirth said the supermajor is “resilient and positioned to withstand this challenging environment. Given the decline in commodity prices, we are taking actions expected to preserve cash, support our balance sheet strength, lower short-term production and preserve long-term value.”

Chevron’s cash capital and exploratory expenditures are expected to decrease by $3.3 billion to $10.5 billion in 2020. Total spending in the second half of the year is forecast at about $7 billion, an annual run rate 30% lower than the approved budget announced in December.

“The flexibility of our capital program allows us to respond to these unexpected market conditions by deferring short-cycle investments and pacing projects not yet under construction,” said upstream chief Jay Johnson. “At the same time, we are focused on completing projects already under construction that will start up in future years while preserving our capability to increase short-cycle activity in the Permian and other areas when prices recover.”

In addition to the capex cuts, Chevron has suspended its share repurchases, which this year had been set at $5 billion. It bought $1.75 billion of shares in the first three months.

“Recent decreases in commodity prices, as a result of Covid-19 impacts on reduced demand and geopolitical pressures increasing supply, are expected to negatively impact the company’s future financial and operating results,” Chevron management said. “Due to the rapidly changing environment, there continues to be uncertainty and unpredictability around the impact on our results, which could be material.”

Bellwether oilfield services (OFS) giant Schlumberger on Tuesday signaled a 30% reduction in capex from 2019 levels, with nearly all of its spending now to be directed to international markets.

During a presentation at the Scotia Howard Weil conference, CEO Olivier Le Peuch offered a glimmer of good news, noting that Schlumberger’s China manufacturing/supply chain was recovering to “pre-crisis levels.”

Schlumberger’s North American onshore operations are being impacted by the oil price correction and Covid-19 pandemic, he said. A “rapid reduction” in the rig count is forecast for 2Q2020, which could trough to 2016 levels, Le Peuch said.

At Houston’s Phillips 66, capex has been cut by $700 million to $3.1 billion. In the midstream unit, the Red Oak Pipeline and Sweeny Frac 4 projects, as well as Phillips 66 Partners’ Liberty Pipeline all have been deferred.

The partnership also has postponed a final investment decision on ACE Pipeline. Phillips 66 said partner DCP Midstream also is not expected to exercise its option to participate in the Sweeny Fracs 2 and 3 this year.

Also announcing capex cuts on Tuesday was Antero Resources Corp., a major producer in Appalachia. Antero has cut spending to $1 billion from $1.15 billion for the year, it said in a filing.

Meanwhile, OFS operator FTS International Inc., which does completions and fracture (frack) work across the Lower 48, has furloughed crews and support staff that no longer have scheduled work. Executive salaries have been cut by 25% on top of a 15% reduction already in place this year. And stage bonuses and travel time pay for crews have been cut, while bonuses have been suspended for some staff.