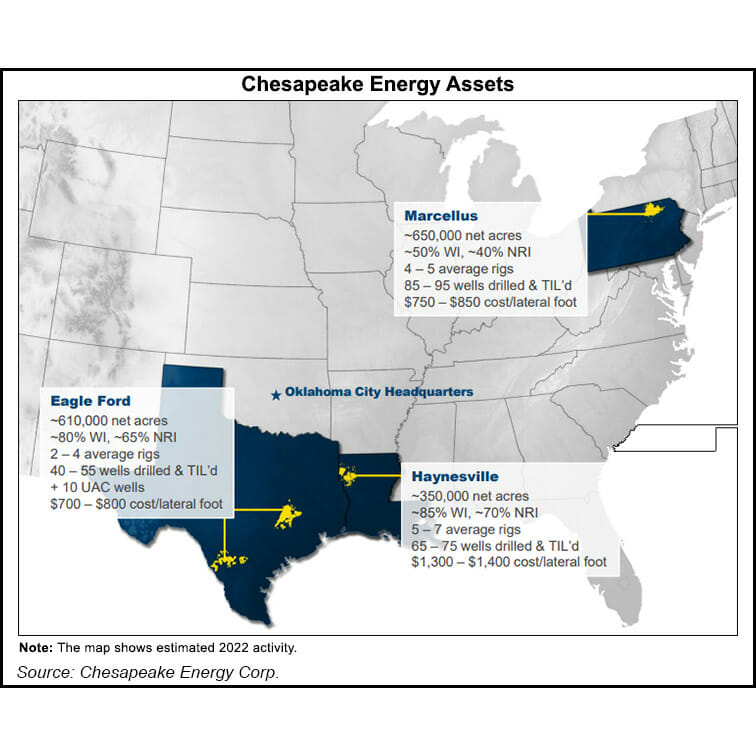 “As export capacity doesn’t begin to increase until at least 2024, we’re setting up our near-term volumes to be relatively flat and begin to ramp slowly as we approach 2024,” CEO Domenic J. Dell’Osso said.

Management said the company remained bullish on its Haynesville and Marcellus shale assets. The company would only pull back on its production plans if prices fell to the mid-to-low $3.00/MMBtu range.

Along with a supply agreement with Golden Pass LNG Terminal LLC, the company has 1 Bcf/d of capacity to deliver certified gas from the Haynesville to the LNG corridor starting in two years. The company sees already under-construction liquefaction capacity pulling an additional 5.7 Bcf/d of U.S. natural gas by 2025.

Third quarter production was 4.1 Bcfe/d, 90% of which was gas. The company used an average of 16 rigs to drill 58 wells and placed 50 wells on production in the quarter.

Chesapeake is currently operating 13 rigs, five in the Marcellus, two in the Eagle Ford and six in the Haynesville. It plans to add a seventh Haynesville rig by the end of the month. Executives, however, said they do not see a need for an eighth Haynesville rig next year.

Management expects the company will drill 45-50 wells and place 60-65 wells on production in the fourth quarter. For next year, management anticipates inflation of 10-15%. Haynesville inflation is expected to be slightly higher than in the Marcellus.

The company’s decision, meanwhile, to exit the Eagle Ford Shale and sell its assets is also progressing, the CEO said. In August, management said it was putting the 650,000 net Eagle Ford acres it has spread across South and East Texas up for sale. Proceeds would go to share buybacks and paying down debt.

The company has so far this year returned $1.9 billion to shareholders in the form of dividends and share repurchases.

CFO Mohit Singh said Chesapeake was seeking to improve its credit rating to the highest level.

“As you start thinking about the LNG strategy that we have in play, being investment-grade would be extremely valuable in that scenario,” Singh said. “We are actively engaged with all three rating agencies… the credit metrics are obviously investment-grade quality already.”

Executives also said LNG offtakers in Europe and elsewhere are extremely interested in the carbon composition of natural gas.

“We think it will increasingly get the attention of domestic gas buyers as well,” Dell’Osso said. He added that in the future, a lower emissions gas molecule could fetch tax breaks. He said gas demand “should continue to grow as the world seeks to have more of the affordable, reliable and lower carbon energy that solves some of the biggest challenges facing the economy today.”

Since 2021, Chesapeake has installed 2,000 continuous methane emission monitoring devices and retrofitted more than 18,000 pneumatic devices across its operations. The company has a net zero goal for 2035. The Momentum pipeline, which has an option for Chesapeake to participate in 35% of the equity, includes a carbon capture and sequestration component that could help in this goal.