Cheniere Energy Inc. on Tuesday pulled the trigger to build a third train at the Corpus Christi natural gas export project in South Texas as the CEO cited “tailwinds” in the global market. Freeport LNG also announced intentions to build a fourth train at its Southeast Texas export facility, which is now underway. 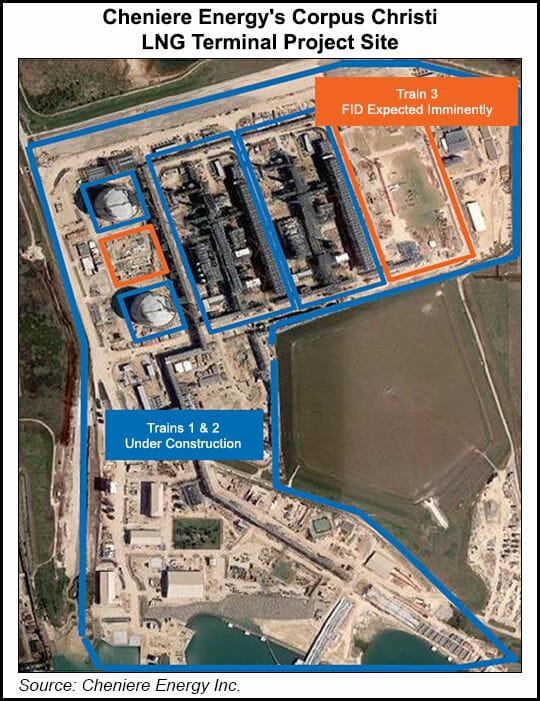 In addition to the final investment decision (FID) to expand, Cheniere is issuing a notice to proceed to engineering, procurement and contractor (EPC) firm Bechtel Oil, Gas and Chemicals Inc. to ramp up construction of the liquefied natural gas (LNG) facility.

The Corpus Christi Liquefaction (CCL) Project got underway late last year with Bechtel given a limited notice to proceed. Each train of the three-train project is expected to have a nominal production capacity of about 4.5 million metric tons/year (mmty).

The first two trains are scheduled to begin service in 2019; an LNG train takes about four years to build. The move to expand the Corpus Christi facility is the country’s first natural gas export-related FID in three years.

“Moving forward with the construction of Train 3 at Corpus Christi reinforces our position as the leader in U.S. LNG,” said CEO Jack Fusco. “We continue to see significant tailwinds in the global LNG market and look forward to delivering additional growth and value to shareholders.”

Subsidiary Cheniere Corpus Christi Holdings LLC also completed previously announced amended credit facilities on Tuesday, with total commitments increased to $6.1 billion. The amended credit facilities are being used to fund a portion of the costs of developing, constructing and placing into service the three trains and associated pipeline/other infrastructure for the CCL Project and related business purposes.

Also in development is an expansion project in Corpus that would have up to seven midscale liquefaction trains adjacent to the CCL Project, each with nominal capacity of 1.4 mmty. The total expected nominal production capacity of the seven midscale trains is about 9.5 mmty of LNG.

The remaining costs of the CCL Project are expected to be funded by Cheniere and from cash flows generated by the first two trains at the CCL project after they are placed into service.

During the first quarter, Cheniere exported 67 LNG cargoes from Sabine Pass, a 56% increase year/year. It also delivered 30 cargoes totaling more than 2 mmt. Year-to-date through April 30, about 90 cargoes had been produced, loaded and exported.

Project sponsors last year had applied with the Federal Energy Regulatory Commission to construct the fourth train, which tentatively is scheduled to begin operations in 2022. DOE said it would review the application and consider the “domestic need for the natural gas, as well as any other issues determined to be appropriate, including whether the arrangement is consistent with DOE’s policy of promoting competition in the marketplace by allowing commercial parties to freely negotiate their own trade arrangements.”

As part of the analysis, DOE plans to consider studies examining the cumulative impacts of exporting U.S.-produced LNG, that include one by the U.S. Energy Information Administration and by Rice University’s Baker Institute for Public Policy and Oxford Economics.

In April, Freeport LNG said it was delaying startup of the first three trains and was eyeing commercial operations beginning sequentially between the second half of 2019 and the first half of 2020. The updated timeline implied a nine-month delay.

Regarding the proposed fourth train, DOE said protests, motions to intervene, notices of intervention and written comments will be taken through July 23. Electronic filings may be made to fergas@hq.doe.gov. Comments also may be mailed to: U.S. Department of Energy (FE-34), Office of Regulation and International Engagement, Office of Fossil Energy, P.O. Box 44375, Washington, DC 20026-4375.