Feed gas was introduced last month to the third train at Cheniere Energy Inc.’s Corpus Christi liquefied natural gas (LNG) terminal in South Texas, which is expected to produce its first LNG in the coming weeks, according to CEO Jack Fusco. 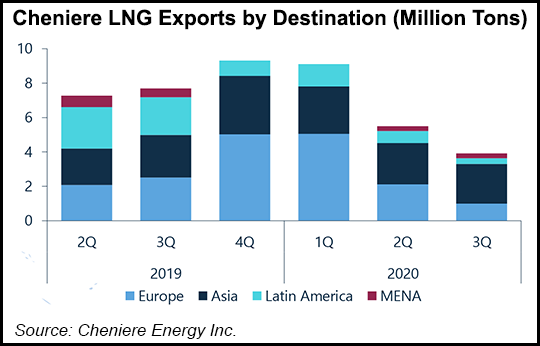 Progress on the expansion project, expected to be complete in 1Q2021, was a bright spot among what Fusco described as a “challenging” third quarter that unfolded in an “unimaginable year” in which the company has battled through a pandemic and a tumultuous Atlantic Hurricane season.

The company’s results were dented by ongoing cargo cancellations this year and its choice to carry forward revenues from the fixed fees it earned from them. Cheniere’s customers couldn’t turn a profit this summer given low prices overseas and elected not to lift volumes under their contracts. The bulk of Cheniere’s production is under long-term, take-or-pay contracts that generally allow customers to cancel cargoes up to 60 days before they are loaded.

More than 100 U.S. cargoes were cancelled over the summer amid a supply glut and lackluster demand during the Covid-19 pandemic. The cancellations peaked at the height of shoulder season in the third quarter. But the market has improved and Cheniere’s management team sounded bullish about a continued recovery in Europe and Asia as the global market rebalances heading into the winter.

“When the third quarter commenced, we were in a period of relatively high cargo cancellations and low facility utilization,” Fusco said Friday during a call to discuss quarterly results. “By the time we exited the quarter, LNG market conditions had materially strengthened, which allowed us to ramp up production and capture additional margins.”

Despite periodic lockdowns across the world to battle the virus this year, COO Anatol Feygin said LNG demand grew by 3% year-to-date through September, adding more than 7 million tons of consumption compared to the same time last year. As the year progressed, LNG production across the world was curtailed as concerns increased about a supply glut.

“The reduction in LNG supply from curtailments helped divert a storage crunch in late summer and positioned the market to start responding positively to the rebound in gas and LNG demand we’re now seeing in many countries as we head toward the winter season,” Feygin said.

CFO Zach Davis said the number of cargo cancellations in the fourth quarter have declined, which is expected to help normalize results as the year comes to a close.

The company’s loaded volumes fell by 51% year/year in the third quarter to 187 TBtu. The number of cargoes it exported also slipped from 108 in 3Q2019 to 55 in 3Q2020. The company said it sourced 31 TBtu from third parties during the quarter, partly to help fulfill contractual obligations after Hurricane Laura impacted operations at the Sabine Pass LNG terminal in Louisiana.

Despite this year’s challenges, the company has continued with efforts to maximize LNG production. As a result, it has increased its production guidance to 4.9 to 5.1 million metric tons/year (mmty), up 12% over the last three years. Fusco said the company’s trains will run more often thanks to gains in operational expertise and maintenance optimization, among other things. The increased run rate has added another 7 mmty that the company can market from its trains at Corpus Christi and Sabine Pass, roughly the equivalent of another train.

“Our commercial efforts are squarely focused on this incremental volume today,” Fusco said, adding that a Stage 3 expansion at Corpus Christi, which could add up to another seven trains, won’t be sanctioned until the company’s incremental volumes are under contract.

Fusco also said Cheniere is receiving an “increasing number of questions” from shareholders regarding LNG’s role in the global energy transition.

“Natural gas is an affordable, reliable, cleaner-burning fuel source and we are confident in natural gas playing an increasingly important role in the global energy mix for many years as country’s set carbon neutrality goals for the second half of this century,” he said. Fusco added that Cheniere is evaluating its emissions profile and exploring carbon management solutions for its facilities, among other environmental initiatives.