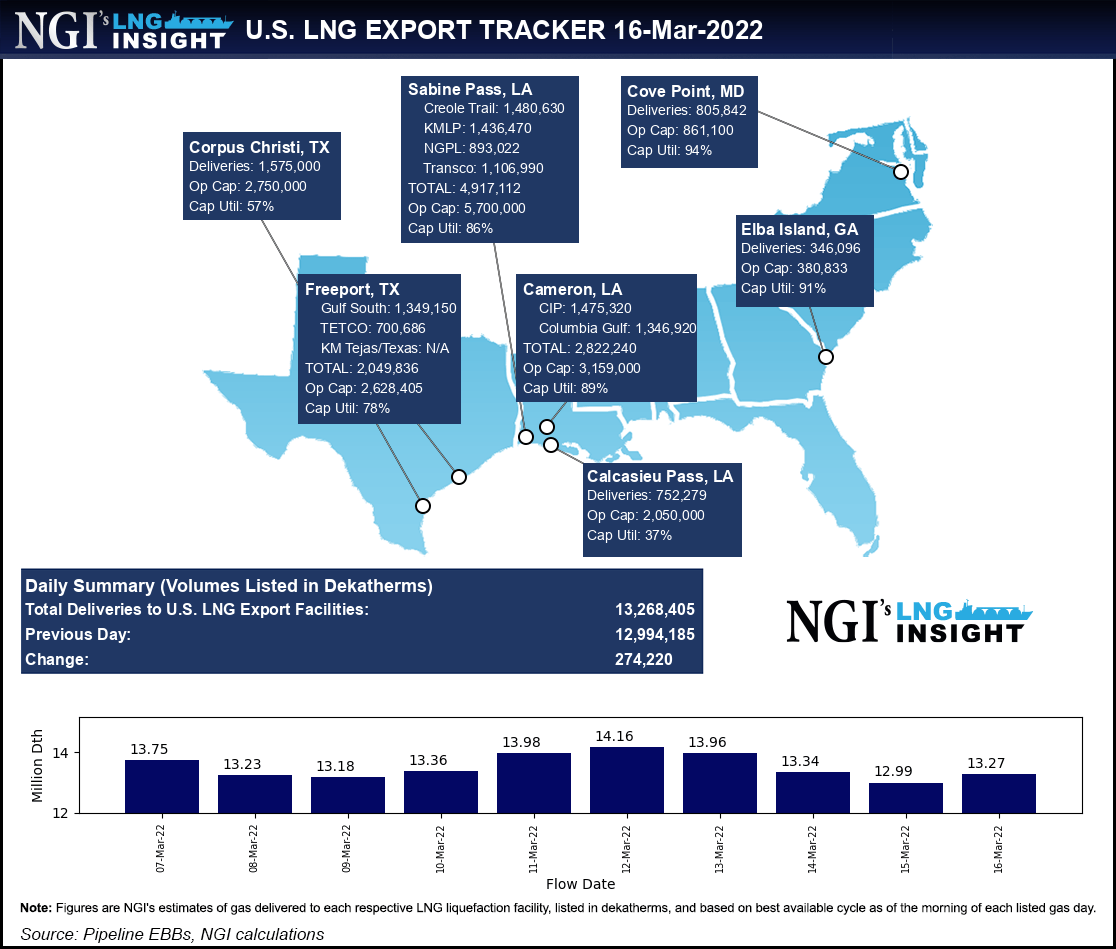 DOE officials on Wednesday gave two long-term orders for Houston-based Cheniere’s Sabine Pass LNG facility in Louisiana and Corpus Christi terminal in South Texas. The combined exports of the super-chilled gas were expanded by up to 0.72 Bcf/d, or around 5 million metric tons/year. The new authorizations allow additional volumes to be exported to any country.

“U.S. LNG remains an important component to global energy security, and DOE remains committed to finding ways to help our allies and trading partners with the energy supplies they need while continuing to work to mitigate the impact of climate change,” DOE officials said.

Sabine Pass and Corpus Christi were in the top of the pack in January for the most deliveries sent overseas, according to the latest LNG report published by DOE. Of the 108 cargoes shipped during January, Sabine Pass was the top supplier with 38. Corpus Christi tied with Sempra Infrastructure’s Cameron LNG at 20.

Of the top five countries that took in 63.3% of all the 10.09 trillion cubic feet (Tcf) of U.S. LNG exported in January, four were in Europe. South Korea, usually a top importer of U.S. volumes, came in fifth at 21.6 Bcf.

As the DOE reiterated, most operating LNG export facilities have been operating near their max capacities to meet both contractual obligations and spot market demands.

At CERAWeek by S&P Global in Houston earlier in the month, Cheniere CEO Jack Fusco said capacity for the newest trains at Sabine and Corpus Christi were already “sold out through the 2040s.”

Industry advocacy group LNG Allies in a letter to the Biden administration last month requested action on pending LNG projects. On Wednesday, CEO Fred Hutchison said DOE’s announcement was a vote of confidence, but he pushed for more project permitting.

“Last week’s olive-branch statements by Biden administration officials at CERAWeek in Houston were followed up by real pen-on-paper actions” on Wednesday, Hutchison said.

“We will continue working with the department to ensure a timely and efficient permitting process to advance U.S. LNG export projects, which are key to supplying the affordable, reliable and cleaner energy the world needs now and in the future,” Sommers said.

Rystad Energy’s Sindre Knutsson, vice president of gas and LNG at analytics group, said the added flexibility for Cheniere to route additional spot volumes to Europe may help reduce volatility of the Dutch Title Transfer Facility price in the next few months.

“Between this development and the prospect of additional volumes from Norway, the market is likely looking forward to a slightly less eventful summer than before, which may place downside pressure on the TTF forward curve,” Knutsson said.