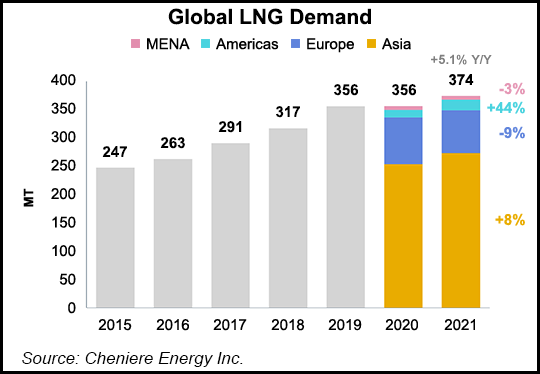 The expanded integrated production marketing (IPM) agreement extends the term and triples the volume of LNG associated with the gas that EOG would supply for Cheniere to market overseas. EOG would provide 720,000 MMBtu/d to the Corpus Christi Stage 3 expansion project once it starts up. Houston-based EOG would earn prices linked to both Henry Hub and the Japan-Korea Marker (JKM).

“The project is well positioned to be sanctioned,” said CEO Jack Fusco. The expansion at Corpus Christi LNG would add seven midscale liquefaction trains and 10 million metric tons/year of capacity at the facility.

“We had great success in getting Corpus Christi Train 3 and Sabine Pass Train 6 underway with limited notices to proceed (NTP), which derisked the projects and got them ahead of schedule early,” Fusco said Thursday during a conference call to discuss year-end results. “We would look to do the same on Stage 3. So, that’s something that could happen in the near-term as we progress toward a full FID and full NTP on all seven trains sometime this summer.”

‘Tailwinds For Our Business’

An LNG supply shortage and growing unrest in Europe as Russia has attacked Ukraine, provides “tailwinds for our business,” Fusco said. Cheniere is the largest U.S. LNG exporter.

“It’s tragic what’s going on in Eastern Europe and it saddens me to see the satellite images on the newscreen that we’ve all witnessed this morning,” Fusco said. “If anything, these high prices – the volatility – drive even more energy security and long-term contracting.

“I would say the fact that there’s a scarcity of LNG these days is driving more and more conversation on how to increase our infrastructure and secure long-term contracts for our European customers,” he added.

The company raised its 2022 financial guidance on the outlook, forecasting both higher earnings and distributable cash flow.

Chief Commercial Officer Anatol Feygin noted that 43% of all European natural gas imports in December were LNG. He said the United States provided about one-third of all those cargoes. The U.S. share rose further in January to 45%, reflecting the highest share of LNG volumes on record provided to Europe from any single country, according to Cheniere.

European buyers have been reluctant to sign long-term LNG deals despite shortages as the continent looks to meet climate goals. Feygin said, however, that the European Union’s move to classify natural gas as a green investment would likely lead to more deals.

“We begin 2022 in an extremely supportive LNG market environment,” Fusco said. “The extended period of volatility, and elevated prices driven by underinvestment in infrastructure and geopolitical tensions, underscore the vital need for reliable, affordable, secure and environmentally competitive energy supplies on a long-term basis.”

Feygin added that global LNG imports jumped by 5% year/year in 2021, when prices in Europe and Asia hit record highs as competition for the super-chilled fuel increased.  Total LNG trade, according to Cheniere, reached 374 Mt. The United States drove the bulk of last year’s supply growth. Management said Cheniere was responsible for more than half of the U.S. volume increase.

Revenue hit record highs of $6.6 billion in the fourth quarter and $15.9 billion for the full year.

However, profits were dented by Cheniere’s increasing exposure to international commodity prices included in the kinds of IPMs extended with EOG. It has reported similar losses in recent quarters as global energy prices have been erratic.

Last year’s results were mainly impacted by derivative losses related to the IPMs with North American producers at prices indexed to JKM. In addition to EOG, the company has IPMs with Tourmaline and APA Corp.

Cheniere has signed more IPM agreements with producers in recent years. The deals have elevated its risk profile and subjected it to commodity price fluctuations that it’s more insulated from under the long-term offtake agreements that underpin most business. Cheniere’s LNG buyers assume most of the price exposure under those agreements.

CFO Zach Davis said the supply deals “provide us with the stable, long-term cash flows that help support our infrastructure platform, and as such, we will continue to pursue them as part of our strategic growth plan as we just demonstrated with the EOG IPM agreement.”