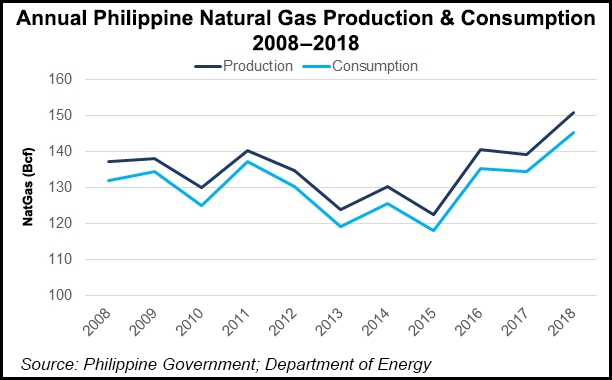 Manilla-based AG&P has worked in constructing oil and gas projects in the Philippines and several countries.

“Beyond transport, the companies will continue to develop flexible, cost-optimized LNG applications and logistics solutions to provide easier and more affordable access to gas for new and un-served customers,” AG&P said.

Chart CEO Jillian Evanko told NGI that Chart’s interest in the AG&P tie-up is providing various equipment and processes for LNG infrastructure buildout, which the company believes will also occur in the Philippines.

“An import facility’s volume/capacity can be expanded to include additional LNG volumes as a broader energy solution for the Philippines, over the road transportation, marine bunkering, and power back-up,” she said. “These broader solutions will likely require LNG and CNG fueling stations, truck bays, storage facilities, marine bunker stations, and additional regasification.

“There is a need for LNG import terminals” in part because the Philippine’s largest source of natural gas is the Royal Dutch Shell plc-operated Malampaya gas field, which is in decline. It is estimated that by 2023 the field may not produce enough gas for the country’s required power generation.

According to the Philippine Department of Energy (DOE), the Malampaya field’s gas-fired plants provide Luzon, the country’s main island, with 40-45% of its power requirements.

However, the country is trying to redress this situation. Since the start of the year, DOE has short-listed at least three groups. They include a joint venture between Manila-based Phoenix Petroleum and state-owned China National Offshore Oil Corp., as well as one between Philippine National Oil Co. and domestic power producer First Gen Corp., along with Tokyo Gas.