In “one fell swoop,” Enbridge Inc. has rebalanced its business between liquids and natural gas infrastructure with the planned acquisition of Spectra Energy Corp., Enbridge CEO Al Monaco said during a conference call Tuesday. 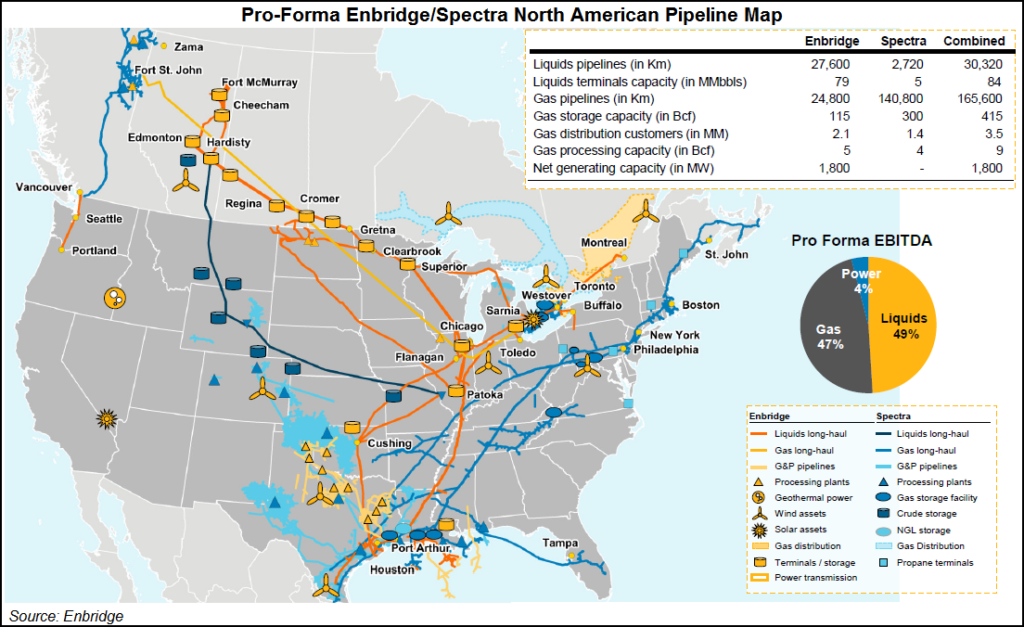 Calgary-based Enbridge plans to acquire Houston-based Spectra Energy in an all-stock deal worth US$28 billion. The result would combine liquids-heavy Enbridge with mostly natural gas-focused Spectra Energy and make the largest energy infrastructure company in North America — and one of the largest in the world — with an enterprise value of about US$127 billion.

“Over the last two years, we’ve been focused on identifying opportunities that would extend and diversify our asset base and sources of growth beyond 2019,” Monaco said. “We are accomplishing that goal by combining with the premier natural gas infrastructure company to create a true North American and global energy infrastructure leader. This transaction is transformational for both companies and results in unmatched scale, diversity and financial flexibility with multiple platforms for organic growth.”

The boards of both companies have approved the deal, which is expected to close during the first quarter of 2017, subject to shareholder approval and antitrust clearance.

The Enbridge-Spectra Energy combination would more than double the project backlog at Enbridge, thereby de-risking the company’s projected growth rate through 2019. During a presentation about the deal to analysts, Monaco and Spectra Energy CEO Greg Ebel touted US$37 billion worth of capital projects in development at the two companies.

Monaco said the new Enbridge would be able to run a 10-12% annual dividend growth program through 2024.

The combined company would be able to support a large capital program, Ebel said. “The transaction premium recognizes the strength of Spectra Energy’s world-class natural gas pipeline system and significant expansion program, while providing shareholders the opportunity to participate in the unparalleled value creation potential of the combined company,” Ebel said.

Ebel said he does not see the opportunities for Northeast pipeline expansion slowing down, despite recent setbacks seen by Spectra Energy and other companies in the region (see Daily GPI, Sept. 1). Monaco said the combined company will likely have more development opportunities than it will be able to absorb. “In some ways you kind of have to hold back in certain areas…” he said, mentioning renewable projects in particular.

The new Enbridge would have crude oil, liquids and natural gas pipelines, terminal and midstream operations, a regulated utility portfolio and renewable power generation. The company would have “first and last mile connectivity to key supply basins and demand markets,” Enbridge and Spectra said Tuesday. On a combined basis for the 12 months ended June 30, the combined company would have generated combined revenues of more than US$31 billion) and combined earnings before interest and taxes of US$4.4 billion.

“The combination of Enbridge and Spectra Energy creates what we believe will be the best, most diversified energy infrastructure company in North America, if not the world,” Ebel said. “…[T]he merged company will have what we believe is the finest platform for serving customers in every region of North America and providing investors with the opportunity for superior shareholder returns.”

Monaco would continue to serve as president and CEO. Ebel will serve as non-executive chairman of Enbridge’s board, which is expected to have 13 directors consisting of eight members designated by Enbridge, including Monaco, and five members designated by Spectra Energy, including Ebel. Guy Jarvis is to be president of liquids pipelines and major projects. Bill Yardley is to be president of gas transmission and midstream. And John Whelen is to be CFO.

Enbridge operates the world’s longest crude oil and liquids transportation system across Canada and the United States and has a growing involvement in natural gas gathering, transmission and midstream business, as well as an increasing involvement in power transmission. It owns and operates Canada’s largest natural gas distribution company, serving residential, commercial, and industrial customers in Ontario, Quebec, New Brunswick and New York State. Enbridge has interests in nearly 2,000 MW of net renewable and alternative generating capacity, and is expanding into wind, solar and geothermal power. Enbridge employs nearly 11,000 people, primarily in Canada and the United States.

Enbridge said expects it would divest about $2 billion of noncore assets to provide additional financial flexibility. During the conference call, no details were provided on what might be for sale. Monaco was asked about the potential for divestitures in order to obtain antitrust approval for the deal. With Enbridge focused on liquids and Spectra Energy focused on natural gas, there wouldn’t be much overlap of businesses, he said.

There will be overlap among customers, the executives said, and they intend to capitalize on that. “That will be an opp. that we’ll work on pretty vigorously once we get the two companies together,” Monaco said.

Enbridge Energy Partners LP and Spectra Energy Partners are expected to continue to be publicly traded partnerships headquartered in Houston. During the conference call, Monaco was asked about the combined company’s master limited partnership strategy. He passed on that question and said right now the focus is on the merger. Enbridge Income Fund Holdings would remain a publicly traded corporation headquartered in Calgary.