Canadian natural gas production is capable of increasing by 65% over the next 20 years — but the potential will only be fulfilled if visions of overseas tanker exports come true, according to a fresh study of supply and demand trends. 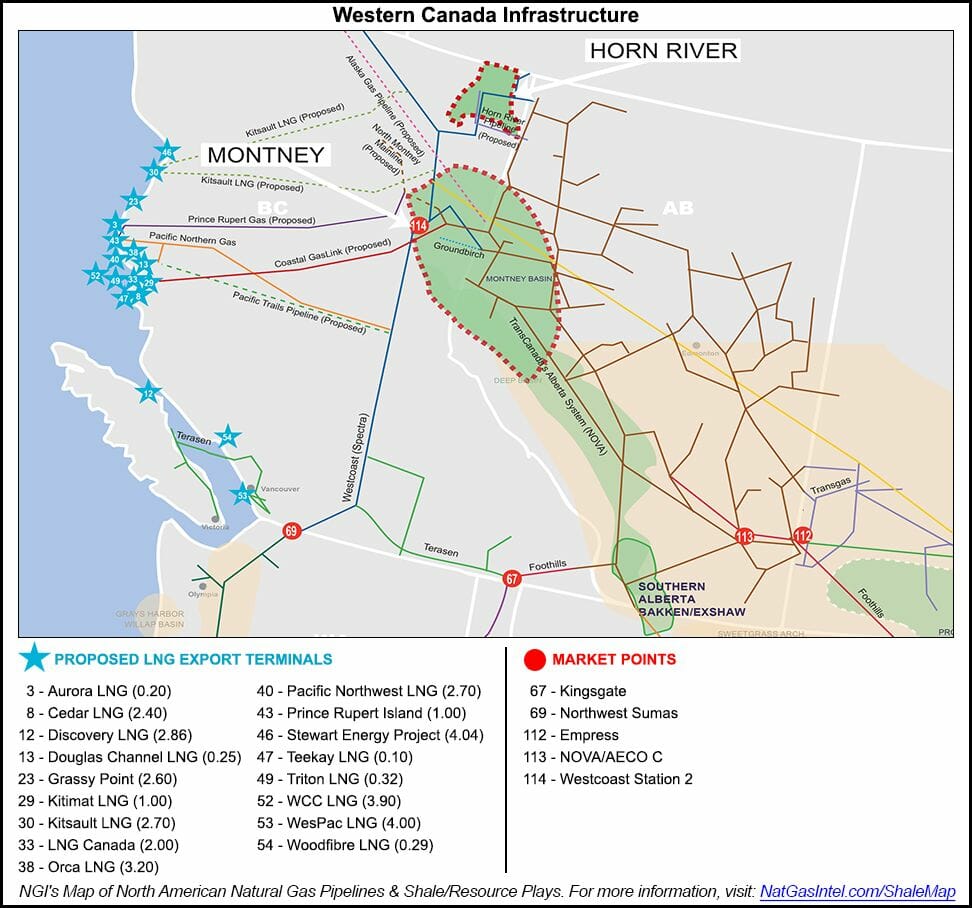 The projections ahead to 2037, by the Canadian Energy Research Institute (CERI), rate as conceivable a rise in national output to 25 Bcf/d, up 10 Bcf/d from the currently depressed rate of 15 Bcf/d.

But CERI acknowledges that the LNG forecast remains shaky. Of 25 terminal proposals, “only one Canadian project on either the Pacific or Atlantic coasts has reached a final investment decision [FID], the Petronas-backed Pacific NorthWest LNG project in Prince Rupert,” the institute said.

Pacific NorthWest still awaits clearance from the Canadian Environmental Assessment Agency and ratification of its recommendation by the federal cabinet (see Daily GPI, Feb. 19). The case has escalated into a contested aboriginal rights issue.

While the regulatory and political wrangling postpone the business decision, CERI said “Petronas has announced major spending cuts in its worldwide operations, leading to speculation that Pacific NorthWest LNG could be postponed.

“The other major British Columbia development that has a fair chance of proceeding is Shell’s LNG Canada. This project still awaits an FID. Shell announced in February 2016 that its FID would be delayed by approximately nine months, but it has obtained environmental certificates and the support of local First Nations.”

CERI expects gas consumption by power plants to rise gradually as environmental policies phase out coal. But most of the remaining 6 Bcf/d of potential Canadian production growth foreseen by CERI is a response to continuing steady expansion by Alberta thermal oilsands plants.

Since 2000 gas consumption in the northern bitumen belt surged to 2.5 Bcf/d from 700 MMcf/d, the institute recalls. An extensive inventory of oil sands projects under construction and approved foreshadows a doubling to 5 Bcf/d over the next 15 years, CERI said.

The development wave has slowed but not stopped. As in the past, reserves measured in billions of barrels enable the big corporations that can afford oil sands plants to spread costs over 50-60 year project lifespans and ride out commodity price cycles.

CERI’s 25 Bcf/d Canadian supply projection also includes retaining 3 Bcf/d of pipeline exports to the U.S., or about 30% of former sales after competition with American shale production settles down into stable regional market shares.

The institute, echoing the National Energy Board’s latest calculation, estimates that Canada has an astronomical 1,087 Tcf of marketable gas resources. CERI also cited widespread Canadian industry hope that prices will recover enough to support tapping more of the stockpile even if the market fails to regain former highs for 20 years.