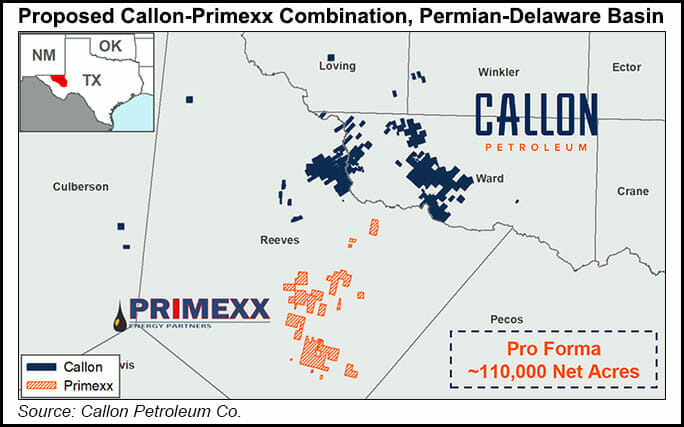 Primexx, headquartered in Dallas, has around 35,000 net acres in the Delaware sub-basin within Reeves County in West Texas. The partnership produced 18,000 boe/d net in 2Q2021. Based on the production volumes, Callon valued the transaction at around $43,800 per boe/d.

“The Primexx transaction checks every operational and financial box on the list of compelling attributes of consolidation,” Callon CEO Joe Gatto said. “The asset base adds substantial current oil production and a top-tier inventory to our Delaware portfolio, and fits squarely into our model of scaled, co-development of a multi-zone resource base.”

As part of the deal, private investor Kimmeridge Energy Management Co. agreed to convert into common shares its remaining portion of Callon second lien senior notes once the transaction is completed. The equitization would save nearly $20 million a year in interest costs, Gatto noted.

Primexx now is running a two-rig program, which would be eased into Callon’s development plans. The acreage has about 300 identified net locations, two-thirds of which are two-mile laterals.

Under terms of the transaction, set to be completed by year’s end, Callon agreed to pay $440 million in cash and trade 9.19 million shares of stock.

Prices Up, Output Down

Callon also issued its 2Q2021 results on Wednesday, noting that production volumes fell from a year ago in the Permian and Eagle Ford Shale.

“The third quarter is off to a tremendous start, with July production volumes well ahead of our second quarter average and our commodity price realizations are projected to benefit from the reduction in overall hedged production,” Gatto said.

Callon plans to run up to four drilling rigs across its Lower 48 acreage through the end of the year. Completion activity and wells turned to production are to be focused mostly in the Permian.