Oil and natural gas drilling rights sales in British Columbia (BC) have fallen sharply this year compared to 2014, according to statistics from the provincial government’s Ministry of Natural Gas Development. 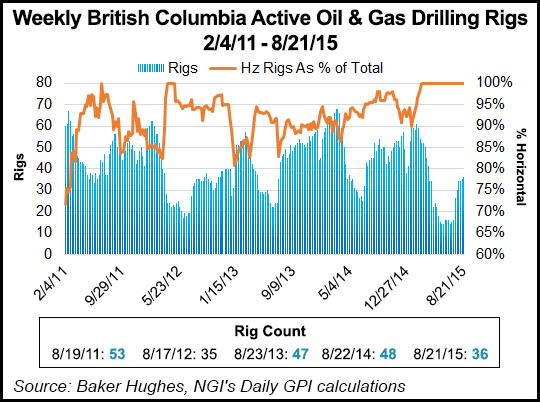 Overall revenue in the first eight months this year ($6.3 million) was down sharply from last year’s total of $383 million. With $366,000 brought in for August, compared to $3 million during the same month last year, it is likely drilling rights sales revenues will be only a fraction of what they were last year. The revenues are used for various social and infrastructure programs.

On a monthly basis, BC holds auctions of drilling rights on parcels in the province’s oil patch. The leases allow producers exclusive rights to drill on specific parcels made available for periods of three to five years. A typical monthly auction averaged $31 million last year, compared with $798,000 so far this year.

The sales help provide an indicator to government and industry representatives of what future drilling activity is likely to be.

The Canadian Association of Oilwell Drilling Contractors (CAODC) has twice this year revised its forecasts downward. In January, CAODC showed a 13% decline in drilling activity, but it is now projecting a 50% decline in the number of oil/gas drilling jobs this year (25,110 vs. 49,950 jobs last year).

Although the interest in BC liquefied natural gas projects has helped offset oil’s decline, CAODC estimates that overall drilling is down about 30% this year.

Six of 10 parcels offered in the August auction covering 2,497 hectares (2.47 acres/hectare) sold for an average price of $147/hectare, the BC gas ministry reported. The next BC sale is set for Sept. 9, offering 16 parcels covering 8,300 hectares, the ministry said.