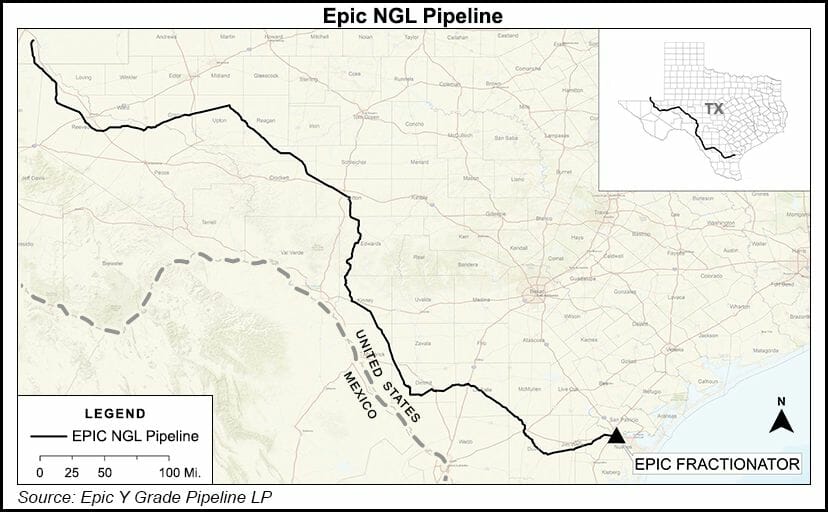 Epic NGL Pipeline, already underway, secured the definitive agreement with BP Energy Co., the marketing and trading unit. The NGL system is to run side-by-side for most of its route with the Epic Crude Oil Pipeline, a 730-mile 440,000 b/d crude and condensate pipeline that would move product from West Texas to Corpus Christi.

BP Energy “brings to this project global commercial expertise for both NGLs and purity products,” said Epic CEO Phil Mezey. BP Energy CEO Orlando Alvarez said the company was “excited to extend its producer services reach into the prolific Delaware and Midland basins, while at the same time serving the growing needs of the petrochemical and refining sectors along the U.S. Gulf Coast.”

The pipeline, built by a subsidiary of San Antonio-based Epic Y Grade Services LP and Epic Midstream Holdings LP, is to have multiple origin points from the Permian, with interconnects in West Texas near Orla, Benedum and Corpus Christi, where an affiliate plans to build a fractionation complex to accommodate pipeline volumes.

An open season for the NGL system is scheduled before the end of the year to test firm capacity support. Epic “is actively acquiring rights of way, and in some cases, multi-line rights will be pursued to accommodate both Epic’s NGL and crude oil projects,” management said. The initial in-service is scheduled for early next year.

Epic Y Grade Pipeline was formed this year to own and operate an NGL system to transport West Texas volumes to the Gulf Coast. Epic predecessor companies TexStar Midstream Logistics LP and TexStar Midstream Services LP owned and operated midstream infrastructure throughout South Texas, including crude oil and gas gathering systems, trunklines, treating and processing plants as well as an integrated NGL system with 120 miles of trunklines and a purpose-built fractionator near Corpus Christi.