Ferrari SpA has become the frontrunner in Bloom Energy Corp.’s race to expand into Europe after the luxury sports car manufacturer announced it has installed solid oxide fuel cells at its headquarters in Maranello, Italy. 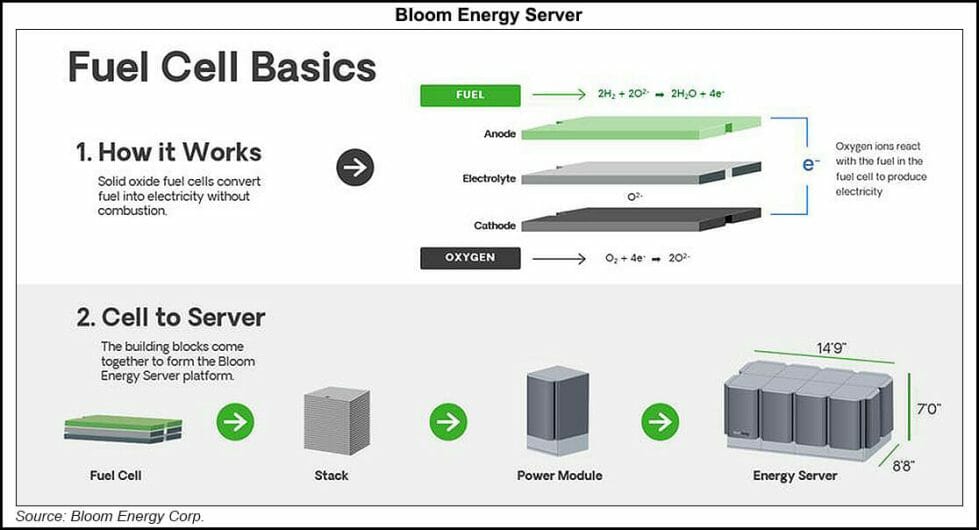 The Bloom Energy Server 5 now generates about 5% of the energy needed at the facility, with the potential for expansion, a Bloom spokesperson told NGI.

With the 1 MW solid oxide fuel cell (SOFC) installation, Ferrari could cut natural gas requirements by about 20% while reducing emissions. The company is seeking to achieve carbon neutrality in its manufacturing operations by 2030.

“Natural gas will remain an important fuel for many European countries,” Bloom’s senior managing director Tim Schweikert told NGI. “The European Union has deemed natural gas-based power as a green investment. We completely agree” with the International Energy Agency “and the European Union. Our flexible platform will play an important role in all the pathways in the energy transition – short term, medium term and long term.”

Bloom’s SOFC systems are able to convert natural gas, biogas or hydrogen into energy without combustion.

In April, the San Jose, CA-based company announced a partnership with EQT Corp., the No. 1 gas producer in the nation. The certificate trade agreement is to purchase certified natural gas under the MiQ Methane and Equitable Origin standards.

The increased adoption of “intermittent generation like solar and wind will put strain on the grid,” Schweikart said. “This further increases the need for reliable generation and energy security. Our platform is fuel-flexible and we defer to our customers on what is best and based on supply. Our customers know they have a future-proof solution – they can use our energy platform to produce energy through non-combusted natural gas, hydrogen or biogas.”

In late June, Bloom said its fuel cell platform had been certified under Conformité Européenne requirements to enter the European market.

The company’s partnership with Ferrari marks Bloom’s entrance into Italy as the Italian Ministry of Economic Development announced it would increase its reliance on hydrogen to cover 20% of the country’s energy demand by 2050.

“The crisis in the Ukraine has elevated and accelerated the need for energy security and access for many organizations across Europe,” Schweikart told NGI. “There are a number of organizations who are interested in our fuel cell platform to meet their aggressive decarbonization goals while ensuring they can continue to operate in the face of energy uncertainty.”

In the United States, when Connecticut, Massachusetts, New Jersey and New York announced they would seek a portion of the $8 billion in federal funding to develop a regional hydrogen hub, Bloom was among the 40 energy companies that signed on to the consortium. Late last year Bloom also announced a hydrogen blending pilot project at the California Institute of Technology campus in Pasadena, alongside Southern California Gas Co. The project to generate and blend hydrogen into Caltech’s existing gas infrastructure is expected to launch sometime this year.