As Mexico’s proven natural gas and crude reserves fall ever rapidly, analysts point to a “black hole” that is tied and bound in the red tape of bureaucracy. 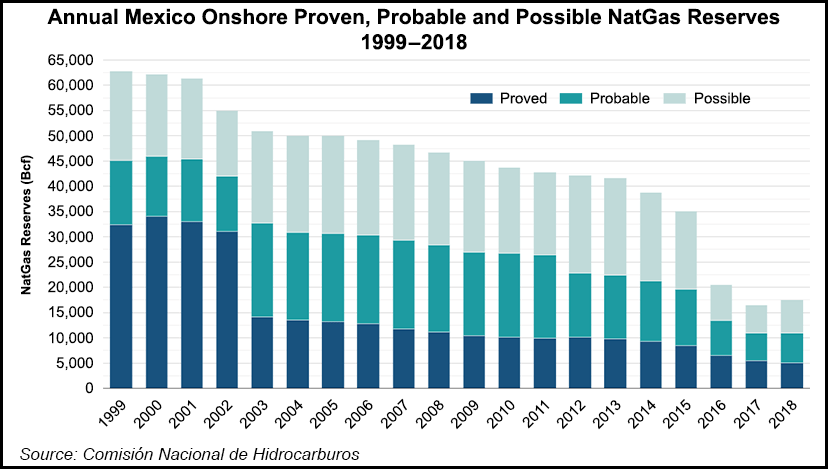 “Half of the prospective reserves have been slashed at the stroke of a pen,” wrote Pablo Zarate in a recent column for the daily El Economista. Zarate, the director of information for Pulso Energetico, a think tank that is supported by Amexhi, the Mexican association of upstream operators and investors, was referring to reserves that would imply the use of hydraulic fracturing (fracking).

Though Energy Minister Rocio Nahle said earlier this year that the government was aiming to permit the technique with strict caveats, since then there has been no clarification on the issue from President AndrÃ©s Manuel LÃ³pez Obrador, who has frequently opposed fracking, though not necessarily all of its variants.

If fracking is to be banned, Zarate wrote, “it doesn’t take much imagination to understand that this would mean a tragedy in both economic and energy terms, that would condemn our nation to depend on others for gas and petroleum needs.”

The principal “collateral damage” generated by any such ban would be suffered by assets currently reported on the state oil company PetrÃ³leos Mexicanos’s (Pemex) balance sheet, Zarate wrote. “If Pemex cannot continue to stimulate wells in the Tampico-Misantla and Burgos basins [those regarded as having the greatest potential, particularly for gas], the value of the great majority of the assets there will simply vanish.”