A symbiotic relationship is burgeoning in North America between oil and natural gas producers and miners of the cryptocurrency Bitcoin. 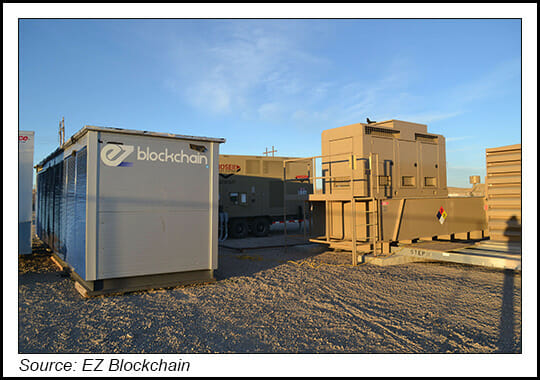 Both groups are seeking to capitalize on immense volumes of excess and/or stranded natural gas flared off or shut in by a lack of infrastructure. Bitcoin mining offers a new outlet for this gas at the wellhead, with no need to invest in pipelines, compressor stations or liquefaction.

“Our goal is to monetize the gas as well as solve some of the environmental problems of leaking wells and flared gas,” said EZ Blockchain CEO Sergii Gerasymovych. The company uses excess natural gas to power its onsite bitcoin mining operations at several production sites throughout North America. “It’s not just a one-way road here…I do want the oil and gas producers to participate in this industry.”

“Mining” in this context refers to the energy-intensive, round-the-clock process through which specialized computers verify bitcoin transactions. The process allows miners to add “blocks” of the distributed public ledger, aka the blockchain, on which transactions are recorded.

The Bitcoin network currently rewards miners with 6.25 Bitcoin per block, plus transaction fees. A new block is added to the chain about every 10 minutes on average, and the reward is how new units of the digital currency enter into circulation. The price of one bitcoin was around $33,000 as of Friday.

Bitcoin mining consumes an estimated 8.64 GW of power globally, or 75.62 TWh on an annualized basis, according to the latest modeling by University of Cambridge Bitcoin Electricity Consumption Index. This figure exceeds the annual power consumption of entire countries such as Greece or Austria, illustrating the vast amount of energy needed to power and cool the application-specific integrated circuit (ASIC) computers used in the mining process.

In an effort to slash energy costs, bitcoin miners increasingly are trucking modular data centers packed with ASIC computers to oil and gas fields in regions such as the Powder River Basin (PRB) of Wyoming, the Bakken Shale of North Dakota and Montana, and the Permian Basin of southeastern New Mexico and West Texas.

Miners connect the data centers to natural gas-fired generators located on the well pad. The computers then go to work solving complex cryptographic puzzles generated by the Bitcoin network as part of a transaction verification system known as “proof of work.”

The arrangement provides miners with a cheap, abundant source of energy, while exploration and production (E&P) firms are able to monetize gas volumes that otherwise would not have a market. Producers also are able to reduce gas flaring and methane leakage, recover a portion of their drilling costs, and in some cases, hedge against commodity price volatility.

For producers, “it’s the best of both worlds,” said Giga Energy Solutions co-founder Matt Lostroh. He spoke with NGI about the Houston-based company’s work.

Giga Energy uses excess gas from conventional oil wells in East Texas to power its onsite bitcoin mining operations. The generators have a guaranteed 99% combustion rate, Lostroh said, which is considerably higher than many flares in the area.

In November 2018, an 88% gas capture requirement went into effect for oil and gas producers in North Dakota.

The management team for Kraken Oil & Gas LLC, a private equity-backed Bakken pure-play, was evaluating its options as it became apparent that the firm’s projected associated natural gas output in the oily Williston Basin would likely outpace available midstream capacity.

Kraken executives see the gas capture targets, which have since risen to 91%, “as a positive thing to incentivize us and also our midstream partners to…try and eliminate as much flaring as possible,” CEO Bruce Larsen told NGI.

To get ahead of the gas capture conundrum, Kraken deployed mobile refrigeration units (MRU) to capture natural gas liquids (NGL) from the gas stream, and onsite gas-fired generators to power its electric submersible pumps.

“Both of those solutions were interesting, but we could only scale the onsite power generation to a point where we could use the power,” Larsen said. The MRUs, meanwhile, allowed Kraken to avoid burning off the NGLs. However, the pure methane leftover still had to be flared.

As Kraken was considering how else it could increase its gas capture rate, Larsen said he received a call from a friend in Denver who told him about Bitcoin miners powering data centers with excess gas in the oilfield.

Kraken management figured that, “if we could form a partnership or a relationship where they could use the gas and eliminate the flaring, it was kind of a win-win,” Larsen said. Crusoe has since deployed about 25 MW of gas-fired capacity consuming a total of roughly 3 MMcf/d at Kraken’s Bakken operations.

“They’ve been able to keep up with our operations pretty well,” Larsen said “Uptime on their stuff has been very reliable.” He explained that Crusoe’s relationship to Kraken is essentially that of an “onsite midstream” firm.

Crusoe in May announced a major expansion of its Denver headquarters, with Gov. Jared Polis singing the company’s praises.

In addition to Kraken, Crusoe’s clients include E&Ps such as Devon Energy Corp., Enerplus Corp. and Equinor ASA.

While the Kraken-Crusoe relationship is that of a gas supplier and buyer, other oil and gas companies are taking a more active role in mining cryptocurrency.

Chicago-based EZ Blockchain has deployed about 12 MW of gas-fired generating capacity for its clients to power crypto mining data centers at oil and gas production and gas processing sites throughout North America.

Gerasymovych co-founded the firm in 2017 as a provider of data center hosting solutions for cryptocurrency mining. High electricity costs and volatility in the Bitcoin price proved challenging. Gerasymovych and his partners soon realized they needed to change their approach.

The company pivoted to building modular data centers, and researched the economics of energy sources such as hydropower, solar, wind and natural gas.

“Any type of power that is available in the world we researched,” Gerasymovych told NGI. “And we figured that the only power that we can generate efficiently, without very high [capital expenditure] and within a rather short period of time, would be natural gas power.”

When Gerasymovych and his partners learned about the staggering volumes of gas being vented and flared in the United States, estimated at 1.8 Bcf/d in 2019 according to the Energy Information Administration, they realized EZ Blockchain could be a company that “not only thinks about making money, but makes money based on the vision of resolving wasted energy problems around the country,” he said.

Gerasymovych and his team started analyzing flaring data in North Dakota and started asking producers in the state if EZ Blockchain could purchase their excess gas to mine bitcoin. It was slow going for the first nine months or so. Operators were skeptical of “a foreign concept and a foreign guy,” said Gerasymovych, who is from Ukraine.

Again, a strategy tweak was in order.

He said, “we figured that if we want to really work with the oil and gas sector utilizing wasted gas…we do need to partner in a way that every party participates in the revenue.”

EZ Blockchain proposed a model in which producers would pay the entire upfront cost of the data center, supply it with gas and power, and pay the company a flat fee to operate it. Under this model, the E&Ps would be the Bitcoin miners, collecting the mining rewards and transaction fees for adding new blocks to the chain.

“And bingo, that was the thing that got traction on our end,” Gerasymovych said. “We started selling more and more of the systems, and people got very excited that they could actually participate in Bitcoin mining.”

EZ Blockchain has since moved on from North Dakota because of the costs associated with stripping NGLs from the wet gas that is typical of the Bakken.

The company has projects operating in the PRB, Utah’s Uinta Basin and the New Mexico portion of the Permian.

EZ Blockchain in June opened a Houston office to pursue projects in the Texas portion of the Permian. It also is developing projects at gas-directed wells in the Marcellus Shale that are currently shut in because of a lack of takeaway capacity.

He explained, “I actually have a vision that I want every oil and gas producer to have this system on their well pad.” Even if a well is connected to a pipeline, producers may choose whether to sell gas to the market or use it to mine Bitcoin, he said.

It also is important to bring mineral rights owners into the fold, said GigaCrypto Inc. President Roger Dixon. The company mines bitcoin in the PRB. (GigaCrypto Inc. is not affiliated with Giga Energy Solutions.)

“One thing that was a surprise that’s happened is some of the surface rights owners there, which are mostly ranchers and ranching families, are kind of upset at the way they’ve been treated by some of the operators in the past,” Dixon told NGI.

He said in some cases, mineral rights owners have been excluded from arrangements between miners and operators to share in the revenue generated from cryptocurrency.

One family offered to give GigaCrypto exclusive rights to mine bitcoin at any wells on the family’s property “because we make sure they are compensated properly for their surface rights,” Dixon said.

While oilfield bitcoin mining and cryptocurrency in general are still in their infancy, neither appears to be going away anytime soon.

“Proof of work cryptocurrency mining and other cloud-based computation will become a core #midstream business within five years,” tweeted PetroNerds’ Ethan Bellamy, co-host of the podcast, on Wednesday (June 23). “The fit is too obvious and natural once you understand the industrial logic.”

NGI’s Nathan Harrison, senior systems engineer, said large companies in historically conservative industries such as insurance are beginning to embrace Bitcoin as a hedge against inflation and a store of value. Energy companies, he said, could benefit from doing the same as a hedge against oil and natural gas price volatility.

Massachusetts Mutual Life Insurance Co., for example, made headlines in December when it purchased $100 million in Bitcoin for its general investment account.

“One of the hard problems of being an oil and gas operator is you’re operating in an industry in which everybody is doing the same thing,” Harrison said.

“In reality, if everybody else is doing that and you’re the one who does go hogwild, you stand to benefit,” Harrison said. “But if everybody starts producing, then prices go back down.”

In other words, “there’s a huge incentive to not do what others are doing in this industry,” he explained.