A majority of respondents in a survey of the Texas oil and gas sector expects the West Texas Intermediate (WTI) oil price to average $30-59/bbl by next May, and most expressed a “good deal” or “great deal” of concern about Democratic candidate Joseph R. Biden Jr. becoming president in November. 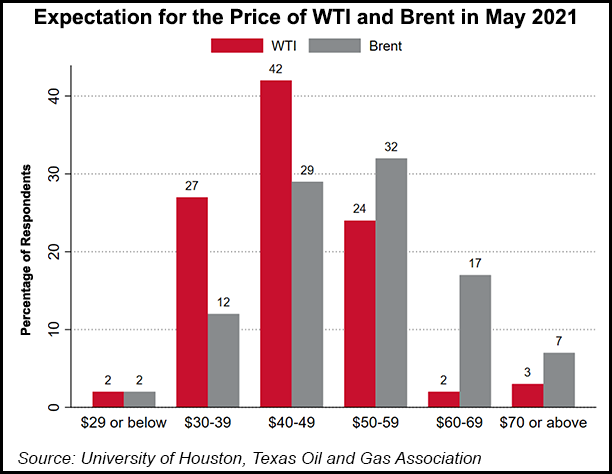 Researchers at the University of Houston’s Hobby School of Public Affairs, with assistance from the Texas Oil and Gas Association (TXOGA), surveyed 48 TXOGA members between May 12 and May 27 about the sector’s prospects in the wake of Covid-19.

During the survey period, the July WTI contract price ranged from $26-34/bbl.

TXOGA member companies account for more than 80% of the state’s oil and natural gas production, 80%-plus of refining capacity, and operate the vast majority of the pipelines.

Asked the extent to which they were concerned about a series of potential events impacting their companies, 76% expressed either a good or great deal of concern about Biden defeating President Trump in November, ranking his election higher than for any other event.

In other words, the potential victories of Biden and Trump were viewed as the most and least significant threats, respectively.

Asked what measures they would like to see from Texas regulators to assist the industry in the wake of Covid-19, the most popular action was property tax relief, with 87% listing this among the most useful actions the state could take.

In second place (65%) was the extension of waivers by the Railroad Commission of Texas (RRC).

Gov. Greg Abbott in mid-March declared a state of disaster for all Texas counties in response to the pandemic. The RRC, in turn, said it would allow utilities, pipeline operators and producers in the oil and gas sector to request waivers for certain regulatory requirements, as long as the state of disaster was in effect.

Abbott was among the country’s most aggressive governors in pushing to reopen the state’s economy, although Texas has seen a resurgence in coronavirus cases since the lifting of statewide stay-at-home orders on May 1. Covid hospitalizations hit a record 2,153 on Wednesday (June 10), according to the Department of State Health Services.

The economic impact of the pandemic has decimated jobs and activity in the Texas oil patch.

The state’s oil and gas rig count stood at 114 as of Friday, down 75.6% from the same time a year ago, according to the latest figures from Baker Hughes Co.