The Biden administration on Wednesday called for overhauling the corporate tax code that, among other things, would replace fossil fuel subsidies with incentives to promote renewable energy production. 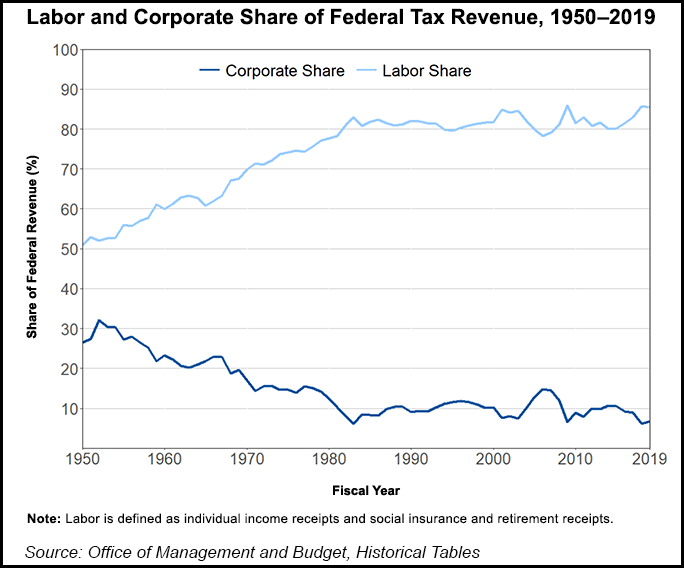 The Made in America Tax Plan, unveiled by Secretary of the Treasury* Janet L. Yellen, is designed to raise $2.5 trillion in revenue over a 15-year period. The shift could mark a dramatic redo of the U.S. tax code, which allows some American companies to reduce or eliminate liabilities.

In a briefing with reporters, Yellen said the tax overhaul would end a global “race to the bottom” regarding corporate taxation, which she said has been destructive for the U.S. economy.

“Our tax revenues are already at their lowest level in generations,” Yellen said. “If they continue to drop lower, we will have less money to invest” in infrastructure, as well as research and development.

The energy sector could be looking at big changes. The proposal noted that the U.S. system today “contains tax preferences for fossil fuel producers and lacks sufficient incentives for climate-change mitigation.”

Tax preferences provided to “oil, gas and coal producers today decrease their tax liabilities relative to other firms,” the proposal noted. “Not only does this lead to lower overall tax receipts, but these provisions of the tax code shift our energy production away from cleaner alternatives, undermining long-term energy independence and the fight against climate change.”

Fossil fuel operators also benefit from “substantial implicit subsidies, since they sell products that create externalities, but they do not have to pay for the damages caused by these externalities.”

According to estimates by the Treasury’s Office of Tax Analysis, “eliminating the subsidies for fossil fuel companies would increase government tax receipts by over $35 billion in the coming decade. The main impact would be on oil and gas company profits.”

The tax plan proposes to advance renewable electricity production by providing a 10-year extension of the production tax credit and investment tax credit for alternative energy generation and storage.

The administration said the plan also would create tax incentives “for long-distance transmission lines to ensure that clean energy can be carried to cities, homes and businesses. The plan further expands the tax incentives available for electricity storage projects.”