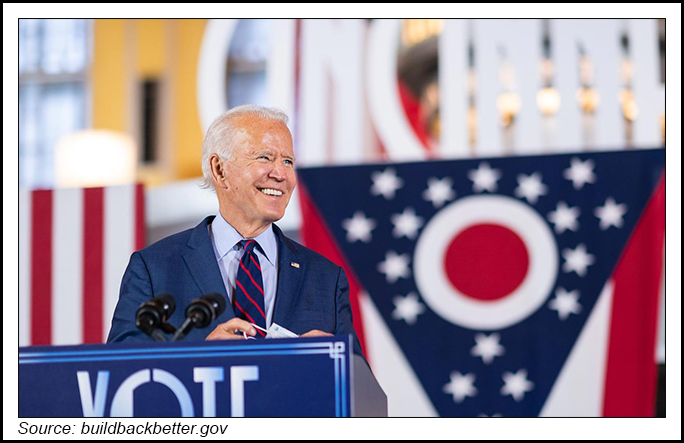 The positions for Kerry and Sullivan are directly appointed by the president, while the other nominees would require confirmation by the Senate.

Biden emphasized the importance of Kerry’s newly created position for the global fight against climate change.

“For the first time ever the United States will have a full-time climate leader who will participate in ministerial level meetings,” Biden said, adding, “that’s a fancy way of saying they’ll have a seat at every table around the world. For the first time ever, there will be a principal on the National Security Council who can make sure climate change is on the agenda in the Situation Room.”

Kerry’s position “will be matched with a high level White House climate policy coordinator and policymaking structure to be announced in December.”

As secretary of state under President Obama, Kerry championed the fight to curb global greenhouse gas emissions and was an architect of the 2015 United Nations global climate accord, aka the Paris Agreement.

Biden has pledged to immediately reenter the pact, from which the United States formally withdrew under President Trump.

“Let me be clear,” Biden said Tuesday, “I don’t for a minute underestimate the difficulties of meeting my bold commitments to fighting climate change. But at the same time, no one should underestimate for a minute my determination to do just that.”

The comment was presumably a reference to the challenge of passing transformative climate legislation in a divided congress, assuming Republicans retain their majority in the Senate. A special election in Georgia in early January is to determine whether Republicans or Democrats control the Senate.

The impacts of Biden’s climate policies on the North American natural gas and oil sector remain to be seen. He has pledged to ban new oil and gas permitting on federal property and eliminate tax breaks for fossil fuel companies. Biden’s $2 trillion climate plan calls for a carbon emissions free power sector by 2035. Infrastructure such as pipelines and liquefied natural gas terminals also are expected to face a tougher permitting and regulatory environment in the new administration.

The President-elect has said repeatedly, however, that he would not ban hydraulic fracturing, which is key to unconventional drilling.

“The incoming administration is leaving no doubt about its focus on tackling the climate crisis in appointing John Kerry…and taking the unprecedented step to elevate this position to the National Security Council,” said World Resources Institute CEO Andrew Steer. “There are few people in the world with as remarkable a track record on climate change as John Kerry.”

The Environmental Defense Fund tweeted that Kerry “is one of the world’s most effective climate champions and is the ideal person to restore U.S. global climate leadership.”

Blinken, meanwhile, “is a seasoned and trusted diplomat, who understands the importance of advancing international cooperation on climate change and related issues,” Steer said. Blinken served as deputy secretary of state from 2015-2017 under Obama and has advised Biden on foreign policy since 2002.

Blinken “is joined by Jake Sullivan as national security advisor, who has been a strong advocate of putting climate change at the center of international diplomacy,” Steer added.

Sullivan served as deputy assistant to the president and national security advisor to then-Vice President Biden in the Obama administration, and as deputy chief of staff to former Secretary of State Hillary Clinton.

Greenfield-Thomas, meanwhile, “brings a wealth of experience” and “will be a forceful advocate for the critical role of multilateralism” to address issues such as Covid-19 and climate change, Steer said.

During Tuesday’s event, Greenfield-Thomas listed climate change among a series of “unrelenting and interconnected” challenges facing the world, while Sullivan said the climate crisis is part of “the unprecedented combination of crises we face at home and abroad.”

Biden also has reportedly tapped Janet Yellen, former chair of the Federal Reserve Bank from 2014-2018, to lead the Treasury Department. If confirmed, Yellen also would be in a position to steer climate policy, particularly if a divided Congress stymies legislation.

Biden’s pick of Yellen “bodes well for the climate resilience of the U.S. economy,” said Ceres CEO Mindy Lubber, whose nonprofit is focused on driving sustainability through economic solutions.

Yellen was an original advocate of the Kyoto Protocol and has long advocated for putting a price on carbon pollution, Ceres noted. As co-chair of the international Group of 30 Working Group, she also published a report last month highlighting the role of financial regulators in addressing climate risk.

Yellen “understands the urgent need for monetary policy that protects the U.S. economy from systemic risks, including the systemic risk of climate change,” Lubber said. “Given the recent affirmation from the Federal Reserve that climate change is a threat financial regulators have an obligation to address, Yellen would enter her position with a clear mandate.

“One thing we hope she will do is lead the Financial Stability Oversight Council to incorporate climate risk assessment and management across all financial regulatory agencies – including the Federal Reserve, Securities and Exchange Commission, Commodity Futures Trading Commission and other key federal agencies.”

Biden has yet to name his picks for other cabinet-level positions with major energy sector implications, including Secretary of Energy, Secretary of the Interior and administrator of the Environmental Protection Agency.