President Biden on Wednesday asked Congress for a massive infusion of funding to overhaul the nation’s power grids and expand renewable energy as part of a landmark program designed to fight climate change and expand American jobs. 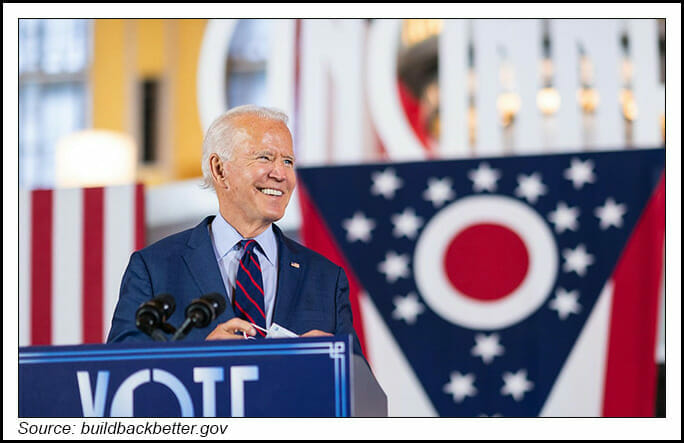 The estimated $2 trillion American Jobs Plan, if enacted by a split Congress, would be the most ambitious federal investment program to date to fight global greenhouse gas emissions and address economic inequality. The president, who campaigned in part on moving toward a clean energy economy, is casting the proposal as a major jobs program as it works to build union support.

The deal also is pitched as a way to compete against the growing might of China.

“The president’s plan will unify and mobilize the country to meet the great challenges of our time: the climate crisis and the ambitions of an autocratic China,” according to the White House.

Specifically for the oil and gas sector, the president has funding to plug abandoned oil and gas wells, along with abandoned mines.

Biden’s plan includes an “immediate up-front investment of $16 billion that will put hundreds of thousands to work in union jobs plugging oil and gas wells and restoring and reclaiming abandoned coal, hardrock and uranium mines.”

The investment also is designed to “reduce the methane and brine that leaks from these wells, just as we invest in reducing leaks from other sources like aging pipes and distribution systems.”

“Building back better requires that the investments in this historic plan make our infrastructure more resilient in the face of increasingly severe floods, wildfires, hurricanes, and other risks. Every dollar spent on rebuilding our infrastructure during the Biden administration will be used to prevent, reduce, and withstand the impacts of the climate crisis.”

The president, who wants to move “toward 100% carbon-pollution free power by 2035,” proposed to extend and expand investment and production tax credits for alternative energy generation and storage. In addition, Biden wants to establish an Energy Efficiency and Clean Electricity Standard to reduce electricity bills and electricity pollution, as well as boost competition, while leveraging “the carbon pollution-free energy provided by existing sources like nuclear and hydropower.”

The president also believes that the “market-based shift toward clean energy presents enormous opportunities for the development of new markets and new industries,” the White House noted.

“For example, by pairing an investment in 15 decarbonized hydrogen demonstration projects in distressed communities with a new production tax credit, we can spur capital-project retrofits and installations that bolster and decarbonize our industry.”

The plan would also establish 10 “pioneer facilities that demonstrate carbon capture retrofits for large steel, cement and chemical production facilities, all while ensuring that overburdened communities are protected from increases in cumulative pollution.”

To accelerate carbon capture utilization and storage (CCUS), the plan would reform and expand the Section 45Q tax credit, making it “easier to use for hard-to-decarbonize industrial applications, direct air capture and retrofits of existing power plants.”

Electric vehicle (EV) infrastructure also would be expanded, with a goal to build 500,000 charging stations by 2030.

“U.S. market share of plug-in EV sales is only one-third the size of the Chinese EV market,” administration officials noted. The proposed $174 billion investment is designed “to win the EV market.”

The plan is designed to spur domestic supply chains from raw materials to parts, retool factories to compete globally, and support American workers to make batteries and EVs. The plan would replace 50,000 diesel transit vehicles and electrify at least 20% of the country’s yellow school bus fleet, as well as electrify the federal fleet, including the U.S. Postal Service.

“This plan would do a generational investment in upgrading and reorienting our power infrastructure in this country for the carbon-free electric future that we are…headed toward, investing in transmission, in storage, in grid resilience.”

The American Petroleum Institute (API) said it supported some of the Biden administration’s proposals but not all of them.

“We support the administration’s goal of modernizing the nation’s infrastructure – including roads, bridges, rail and ports,” said API’s Frank Macchiarola, senior vice president for Policy, Economic and Regulatory Affairs. “We also welcome the administration’s efforts to address the risks of climate change by incentivizing innovation for hydrogen and CCUS as part of this infrastructure package.

“At the same time, this proposal misses an opportunity to take an across-the-board approach to addressing all our infrastructure needs – including on modern pipelines,” he said.

“Targeting specific industries with new taxes would only undermine the nation’s economic recovery and jeopardize good paying jobs, including union jobs. It’s important to note that our industry receives no special tax treatment, and we will continue to advocate for a tax code that supports a level playing field for all economic sectors along with policies that sustain and grow the billions of dollars in government revenue that we help generate.”