Oil and natural gas companies can play a vital role in achieving President Biden’s ambitious climate change goals if they choose to embrace it. 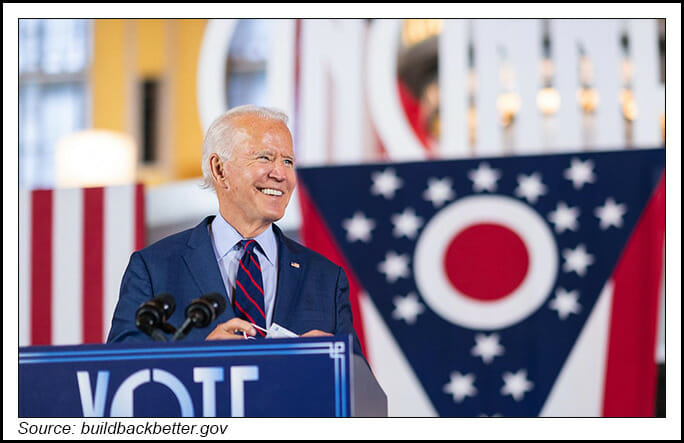 In remarks delivered at CERAweek by IHS Markit, which was held in early March, Department of Energy (DOE) Secretary Jennifer Granholm and Special Presidential Envoy for Climate John Kerry said fossil fuel companies should leverage their existing infrastructure and expertise to help decarbonize the energy sector through new technologies.

These include carbon capture, utilization and storage (CCUS), along with green and blue hydrogen, all of which will be vital to meeting Biden’s goals of a carbon emissions free power sector by 2035 and a carbon neutral economy by 2050.

“If you’re involved as an oil and gas company today, you’ve got this incredible infrastructure, you have the ability to move and transport hydrogen,” said Kerry. “There are all kinds of ways to…accelerate this transition, which we need to do.”

What firms “ought to be doing is figuring out, ‘How do we become not an oil and gas company, but how do we become an energy company?” Kerry said. “I don’t object per se to fossil fuel, I object to the byproduct of fossil fuel, which is the carbon…and the methane, that’s another major problem emerging.”

Kerry said, “In addition, I think we have to pursue every other form of energy as a hedge against whatever technology we can or can’t produce.” He cited potential breakthroughs on battery storage and next-generation nuclear power as possible game changers.

Hydrogen, meanwhile, “is a jump-ball right now” on the international stage, Kerry said, explaining, “We need to get much more involved in the development of that.”

Citing projections from the Intergovernmental Panel on Climate Change, Granholm said, “we’re not going to get to net zero” without CCUS. The former Michigan governor said “there are huge advances that are happening…in green hydrogen, in blue hydrogen, to be partnered with natural gas. We want to further that work, and we see that as an important element of the strategy, in addition to adding obviously clean, carbon-free ions to the grid…”

Granholm said the administration is committed to ensuring the fossil fuel industry workforce is not left behind by the clean energy transition. She has created a jobs office within DOE for helping displaced workers transition to jobs in the clean energy sector.

Trade unions have expressed skepticism about this idea. A majority of tradespeople in the energy sector have said oil and gas jobs offer better pay and more job security than the renewables segment.

Groups such as North America’s Building Trades Unions (NABTU) have cited CCUS, however, as a segment with potential for high-paying jobs.

Oil and gas workers and tradespeople are worried that some of the promises about clean energy jobs can’t be met, Sommers said.

The impact of Biden’s policies on energy commodity prices remains to be seen. The U.S. Energy Information Administration said in its latest Short-Term Energy Outlook that it “expects that Henry Hub spot prices will average $3.14/MMBtu in 2021, which is up from the 2020 average of $2.03/MMBtu.” The 2022 price is expected to average $3.16/MMBtu, researchers said.

The higher forecast is driven in large part by resurgent demand from the liquefied natural gas and industrial segments as vaccines are rolled out and pandemic restrictions continue to loosen. U.S. gas production, meanwhile, is expected to remain relatively flat, EIA said.

Some observers also have suggested that drilling limits on federal property could have a bullish impact on oil prices over the long term.

On CCUS, the API chief said, “We need a partner in the United States government to build out that infrastructure…We have it at some level already with the 45Q tax credit.” Section 45Q of the U.S. tax code provides up to $50/ton for carbon captured and placed in secure geological storage and credits of up to $35/ton for carbon injected into oil or natural gas wells.

API supports additional policies to promote CCUS development, as well as direct federal regulation of methane emissions from the oil and gas sector, Sommers said. He noted that the trade group supports the ambitions of the 2015 United Nations (UN) Climate Accord, aka the Paris Agreement, which the United States rejoined in January under an executive order issued on the day Biden took office.

At a climate summit hosted by the Biden administration scheduled for April 22-23, the United States is scheduled to announce its nationally determined contribution (NDC) for greenhouse gas reductions. That would precede the 26th UN Climate Change Congress in Glasgow slated for Nov. 1-12, Kerry said. API and other industry groups have been less supportive of other actions taken by Biden since taking office, including executive orders to halt oil and gas leasing on federal property, and to revoke a crucial permit for the Keystone XL crude oil pipeline, which moves oil from Canada to Lower 48 markets.