A senior U.S. Department of Energy (DOE) official told members of a House Energy and Commerce Committee panel that the Biden administration is not weighing banning exports of liquefied natural gas (LNG) or crude oil to counter rising energy costs. 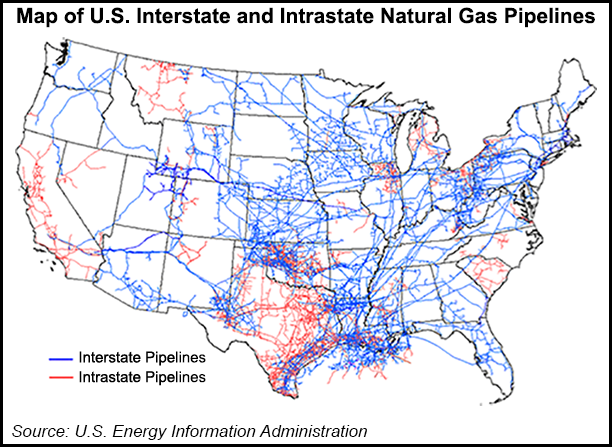 During an Energy Subcommittee hearing this week on House Resolution (HR) 6084, the Energy Products Reliability Act, DOE Deputy Secretary David M. Turk said “an export ban, either on the LNG side or on the oil, is not something that we’re currently discussing and undertaking.”

Turk’s statement followed repeated questions by Republican subcommittee members about whether the administration is considering such actions.

A NERC for Pipelines

Rush said the bill would institute “enforceable reliability standards for energy pipelines, just as we do for the electric grid” under the North American Electric Reliability Corp. (NERC). It was created via the Energy Policy Act of 2005.

Pallone said a subsequent joint report by FERC and NERC corroborated the findings.

“Among other things, this joint report concluded that ‘generating unit outages and delivery were inextricably linked’ during the storm,” said Pallone. “The report recommended that a working group consider whether Congress should vest a single agency with responsibility for ensuring pipeline reliability.”

The FERC-NERC report attributed 58% of unplanned outages during Uri to natural gas-fired power generators. An industry-driven initiative by the North American Energy Standards Board aims to boost coordination between the natural gas and electric markets.

“In contrast, there is no comparable mandatory reliability regime for natural gas and other pipelines that transport energy products, including gasoline and propane,” said Glick.

Glick also testified that the “lack of mandatory reliability standards, especially for natural gas pipelines, poses a risk” to the bulk power system’s reliability because the national gas and electric infrastructure are interdependent.

Glick said HR 6084 should “help to address” such risks by creating and certifying an Energy Product Reliability Organization (EPRO), which would submit legislatively mandated draft reliability standards to FERC.

The legislation, Gilck said, would also grant FERC authority “to order the development of reliability standards and to require the EPRO to issue emergency standards if warranted.” Moreover, the bill includes provisions that would authorize FERC “to review EPRO enforcement actions and to independently investigate and penalize” pipeline reliability standard violations.

“Legislation to establish and enforce reliability standards for the pipeline network will better secure the reliability of our nation’s energy infrastructure in the face of threats such as extreme weather and cyber-attacks,” said Glick. He applauded the committee for “tackling this long-overdue issue.”

Rep. Fred Upton (R-MI) called the HR 6084 “a sweeping power grab” that would prevent states and local jurisdictions “from regulating all types of energy infrastructure…The bill would dramatically expand FERC, transforming a relatively tiny agency into a behemoth with regulatory powers over America’s entire energy system.”

Upton said “Americans are not asking for this bill.” The legislation would “impose new federal taxes, fees and regulations on all energy in this country” – not just interstate pipelines and the bulk power system crossing state lines.

A group of oil and gas industry associations also expressed concerns about the legislation. The group said the bill would “create a new, additional pipeline reliability regulator” that would “not effectively promote pipeline reliability” because it would duplicate and conflict with existing federal and state regulatory programs.

The associations said FERC, the Pipeline and Hazardous Materials Safety Administration, the Transportation Security Administration and DOE each have reliability programs. Also, they pointed out the Department of the Interior, Bureau of Ocean Energy Management, Bureau of Land Management and other agencies oversee energy production. State and local governments also have authority over intrastate natural gas pipelines and local gas distribution systems.

“Inserting a new regulatory entity into this mix without addressing existing regulatory challenges, including capacity constraints resulting from federal and state permitting obstacles, would not be helpful” in advancing pipeline reliability, the trade groups said.

She pointed out that FERC’s jurisdiction also does not extend to oil producers.