Breakeven prices on prime U.S. onshore acreage over the past two years generally have been in the range of $30-40/bbl of West Texas Intermediate (WTI), but the “best performers” are uncovering resources below $20, according to Rystad Energy. 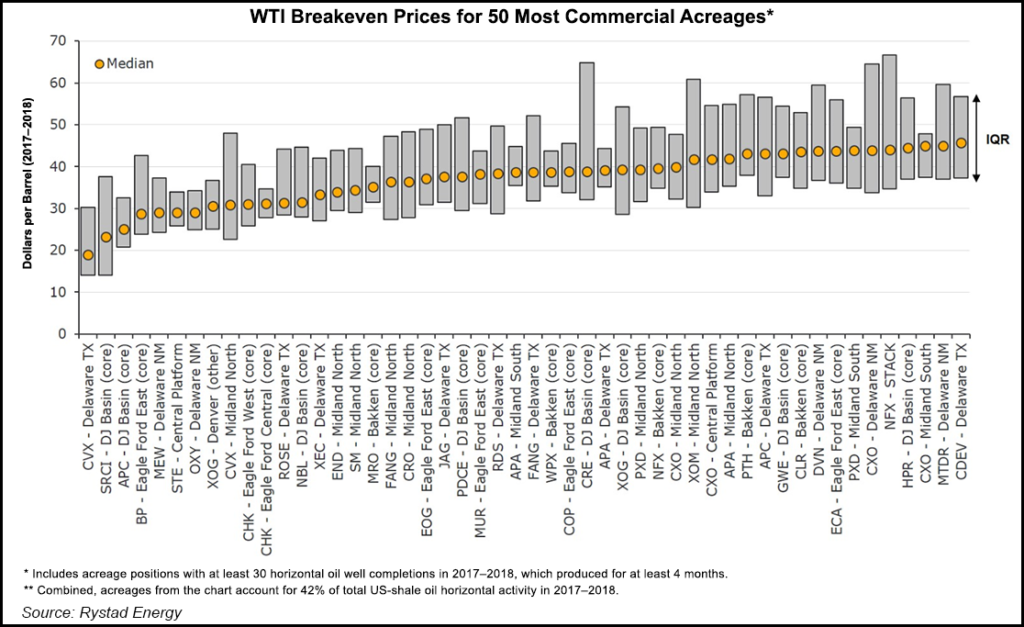 The consulting firm identified the top unconventional performers in the Lower 48 by basin and acreage in a report issued at the annual NAPE Summit in Houston.

Rystad researchers reviewed all acreage positions with at least 30 horizontal oil completions drilled in 2017-2018 and which had more than three monthly production reports. Acreage for the purpose of the study was defined as a combination of operator and sub-basin.

The analysis also compiled the 50 acreage positions with the lowest median breakeven prices, using a 10% discount rate in the calculations.

“Among those 50, even the acreage positions at the low end of the commerciality scale, exhibit median WTI breakeven of approximately $46/bbl, suggesting that a $50 WTI environment will not act as a show-stopper for current U.S. shale oil activity,” Abramov noted.

“The majority of median WTI breakeven prices for acreage positions where activity has already entered into the development phase is concentrated in the $30-45/bbl range. Yet some exceptions exist, and they are often driven by a combination of excellent operational performance, outstanding acreage quality and unique features related to ownership of mineral rights.”

For the top producers in each of the major U.S. basins, an interesting pattern appeared, Rystad’s team noted.

“It is interesting to see that in many basins, operators that were not viewed as basin masters several years ago have nevertheless managed to complete their way to excellence through high-grading, optimization of well design, cost structure and initiation of a full-scale development program,” Abramov said.”

Continental Resources Inc., Whiting Petroleum Corp. and Hess Corp. were not among the top performers in the Bakken Shale, despite being some of the largest producers. That shouldn’t be interpreted as “underperformance by the largest players,” Abramov said.

“Large operators frequently continue test programs on the less prospective parts of their acreage even when all sweet spots have been detected. Hence, median breakeven prices for major operators are frequently affected by contributions from non-core parts of the development program.”

Private exploration companies also were among the leading performers, the research found. Among them, Permian Basin operators Mewbourne Oil Co. Inc. headquartered in Tyler, TX, and Endeavor Energy Resources LP “have been able to achieve basin-leading well economics,: with Mewbourne performing well in the Delaware sub-basin of New Mexico, while Endeavor has performed well in the Midland sub-basin.

For the unconventional wells, Rystad monitored two conceptually different sets of breakeven prices: wellhead breakevens and WTI breakevens. The wellhead breakeven captured drilling and completion costs, lease operating expenses, production taxes and royalties, but it was not used to ascertain the “commerciality threshold” of various basins and acreage positions.

The WTI breakeven price took into account transportation costs, price differentials relative to WTI New York Mercantile Exchange and general/administrative overheads on a per-boe basis and distributed across all wells.

“The WTI breakeven price is a more accurate metric if one wishes to assess the actual price level that might affect current shale activity due to operational considerations,” researchers said.