There was plenty of market activity to keep bidweek traders busy as they put October deals to bed, but outside of Appalachia, the Rocky Mountains and California, bidweek quotes showed only nominal declines of a few pennies. The NGI October National Bidweek Average fell 10 cents to $2.54 from September Bidweek, and represents a mere 3-cent premium over the NGI October 2016 National Bidweek Average of $2.51. 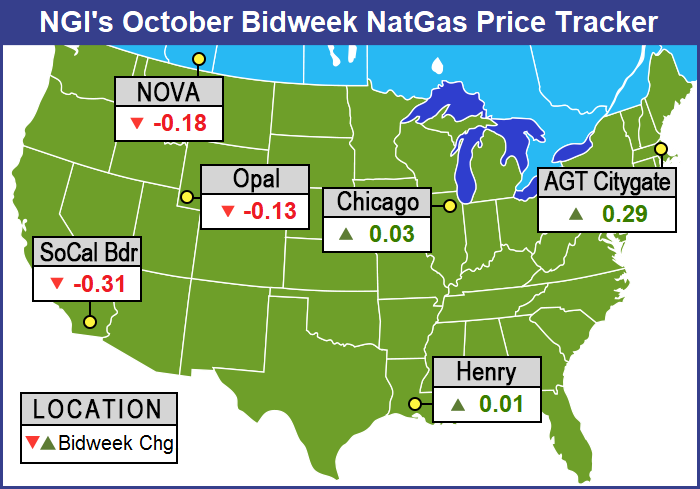 Regionally, Appalachia showed the biggest declines with stout double-digit losses as expected demand languished, and takeaway capacity in the form of pipelines such as Rover Pipeline LLC still had yet to be fully completed. The U.S. point showing the greatest bidweek gain was Tennessee Zone 6 200 L with a rise of 34 cents to average $2.63, while Tennessee Zone 4 Marcellus was bidweek’s greatest loser dropping 61 cents to average 97 cents.

Regional Appalachian basis widened with quotes dropping 50 cents to an average $1.31, and California shed 28 cents to $2.73. The Rocky Mountains were lower by 13 cents to $2.45.

October natural gas futures settled at $2.974, up 1.3 cents from the settlement of the September futures contract.

Spot November futures were down 1.4 cents to $3.007 as bidweek drew to a close Friday.

In many locations buyers held back on bidweek purchases since warm weather meant fewer purchases, at least for Midwest utilities. AccuWeather.com reported that Chicago received 22 heating degree days (HDD) during September, well off its pace of 80 HDD for the month. St. Louis experienced just 13 HDD less than its norm of 51 HDD.

“The warmer weather means we bought less for bidweek,” said a Midwest utility buyer. “It’s good for our customers, but it means we are selling less gas.”

Appalachian producers took the biggest hits as they endured what may be the last vestiges of gas unable to make it to market because of reduced pipeline capacity. In addition to weakness at Tennessee Zone 4, Marcellus gas on Dominion South tumbled 59 cents to $1.10, and gas on Transco Leidy shed 59 cents as well to $1.07.

Based on current forward curves, RBN is projecting combined Marcellus/Utica production to grow from around 24 Bcf/d currently to nearly 40 Bcf/d by the end of 2022.

“That’s a 16 Bcf/d increase, almost half of which is probably going to happen between now and 2019, so Rover shouldn’t have any problem at all filling 3.25 Bcf/d,” nor should a “gaggle” of projects to get gas out of the Northeast. But “the market may have a bit of problem” once all this new supply comes online, “because the Marcellus and Utica region is not the only area that’s experiencing supply growth.”

“At AECO you have all kinds of problems,” said Jeff Richter, principal with EnergyGPS, a Portland, OR-based energy risk management firm. “There are all kinds of constraints going on that they need to shut off production. There are bottlenecks all over the place and they are stranding gas. That market point will have to send a price signal and three weeks ago C45 cents/gigajoule (GJ) didn’t do it so you had to go to 25 cents.

“GTN is having maintenance and that is going to push a half Bcf/d back into AECO, and intra provincial maintenance is going on. The last three weeks AECO has been getting hammered. They came out of it a little bit, but to send a negative price signal there just sends a signal ‘I’ve got to turn you off’,” said Richter.

Wednesday’s activity saw the NGI National Spot Gas Average down 3 cents to $2.62, and October futures expired on a strong note. Traders, however, ascribed much of the strength to short covering rather than any new interest in holding long positions. At the close October had risen 5.6 cents to $2.974, and November had risen 6.1 cents to $3.061.

Market technicians following Elliott Wave and Retracement were seeing the bulls slowly losing their grip on the market, if they ever had it to begin with. The bearish argument, however, needed a lot of work. “Bears have two levels to break if they are going to revive the case for another round of fresh lows,” said United ICAP analyst Brian LaRose in closing comments last Tuesday.

He said the market had to breach $2.88 and $2.75, and if these levels are taken out “we will have no choice but to dust off the case for a visit to the $2.500 neighborhood. As long as the bulls can prevent the November contract from slipping beneath these levels bulls still have a shot at salvaging the case for a bottom.”

In Thursday’s daily trading, both the physical market and futures took it on the chin as forecast drops in eastern energy requirements pulled the plug on market points from New England deep into Appalachia.

Only a couple of points followed by NGI traded in positive territory, and losses of a nickel to a dime in Texas, Louisiana, the Midwest and Midcontinent were easily swamped by double-digit declines in the Northeast and Appalachia. The NGI National Spot Gas Average tumbled 16 cents to $2.46.

The futures markets fared only slightly better as even supportive storage figures for the week ended Sept. 22 were unable to generate any kind of positive market response. The Energy Information Administration (EIA) reported storage injections of 58 Bcf, about 8 Bcf less than what traders were expecting, but prices nevertheless headed south. At the close November had fallen 4.4 cents to $3.017, and December was off by 3.4 cents to $3.184. November crude oil fell 58 cents to $51.56/bbl.

Traders had been looking for a larger storage build. Last year 49 Bcf was injected and the five-year average build for the week stands at 84 Bcf. ION Energy calculated a 60 Bcf injection and Wells Fargo was looking for a 70 Bcf build. A Reuters survey of 24 traders and analysts showed an average build of 66 Bcf with a range of +59 Bcf to +73 Bcf.

“We are trading the range, but we poked slightly higher, so I am favoring the upside,” said Tom Saal, vice president at FCStone Latin America. “The muted response is due to the fact we are trading a winter month in a shoulder month time frame.

”The market is trading the way it should. It was definitely a bullish number but the market has to work off last week’s number [97 Bcf] which was 5 or 6 Bcf higher than expected. The economist in me says we are trading a shoulder month,” Saal said.

As positive as the number may have seemed, it was only enough to nudge the market upward. “It’s going to take a lot more than this [number] to move the market higher. At least we are solidly above $3,” said a New York floor trader.

Inventories now stand at 3,466 Bcf and are 127 Bcf less than last year and 41 Bcf greater than the five-year average. In the East Region 15 Bcf was injected, and the Midwest Region saw inventories rise by 26 Bcf. Stocks in the Mountain Region were 5 Bcf greater and the Pacific Region grew by 7 Bcf. The South Central Region added 5 Bcf.

By the end of bidweek activity Friday, trading for Sunday and Monday delivery followed in Thursday’s footsteps and put in another decline. The NGI National Spot Gas Average skidded 5 cents to $2.41. Futures trading couldn’t hold a candle to the broad weakness in the cash market, and the November contract eked lower by 1.0 cent to $3.007 and December was off by three-tenths of a cent to $3.181. November crude oil rose 11 cents to $51.67/bbl.

A forecast of a sharp one-day temperature drop in the Northeast sent Sunday and Monday quotes soaring. Gas on Iroquois Zone 2 vaulted 73 cents to $2.27, and gas on Transco Zone 6 New York rose a stout 31 cents to $1.52.

Elsewhere eastern quotes sagged for the first two days of October deliveries. Gas at the Algonquin Citygate shed 3 cents to $1.67, and parcels priced at Tetco M-3 Delivery fell 13 cents to $1.05. Gas on Dominion South gave up 24 cents to 75 cents.

The National Weather Service in southeast Massachusetts reported that a fast moving low pressure system would bring “a round of showers and unseasonably cool temperatures” into the weekend, followed by dry weather and cool nights and mild afternoons through Tuesday. Warming is to come Wednesday and Thursday.

Forecasts last Friday showed a slight cooling in the West but otherwise continued above normal temps in the Midwest and East. “The forecast features cooler changes in this period from the Interior West/Rockies to the Midwest, with this being a result of model trends in deepening a trough over the region late in the period,” said MDA Weather Services.

“Confidence, however, comes down…as model spread has increased, particularly in the Midwest, and not only between models but also within each model’s ensemble members. The forecast now leans on the warm side of the Euro model, but like that model features broad above and much above normal coverage across the Eastern Two-Thirds. Belows are limited to parts of the Interior West.”