The Bakken Shale is coming back strong in the months ahead as producers secure more permits and boosted by improved technologies, according to North Dakota officials. 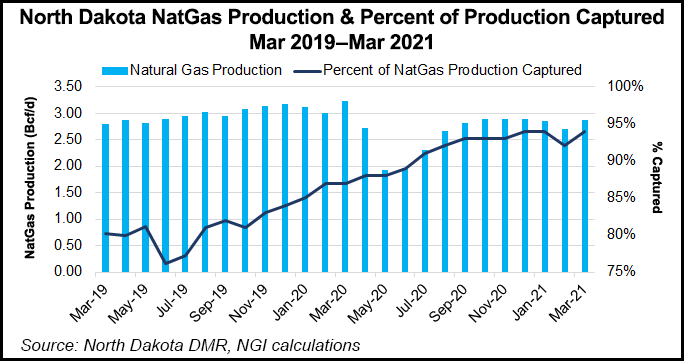 North Dakota Department of Mineral Resources Director Lynn Helms said at the Williston Basin Petroleum Conference in Bismarck, ND, earlier this month that he had signed orders for another 12,095 wells to be drilled into the play, adding to 16,205 active wells.

Permitting did not slow down at the end of last year, he said, and North Dakota has a 1,200-plus inventory. “We’re still fighting to get back out of an enormous hole created by the pandemic.”

Helms and others also shared insight into fracturing older wells (refracking), and how enhanced oil recovery (EOR) can boost supply. Using EOR and improved technologies, he said, “We’re going to double-down on what we’ve done the past 10 years.”

According to Helms, more than half of the potential well sites in the Bakken “have yet to be drilled…We are far from done in deploying drilling rigs, fracking crews, buying sand, moving water and building drill pads.”

Continental Resources Inc. COO Jack Stark during a panel discussion said the Bakken has produced 4 or 5 billion bbl of oil and he thinks there are more than 30 billion bbl still to be produced. The current Bakken oil recovery rate is 8%, but Stark said it could double using refracks and EOR.

Calgary-based Enerplus Corp. COO Wade Hutchings said the company is eyeing more drilling with the acquisitions of Bruin E&P Partners LLC and from buying acreage from Hess Corp. Enerplus is expecting to spend $500 million in capital expenditures this year.

Denbury Inc. CEO Chris Kendall, whose company is an EOR specialist, said, “There’s a great opportunity here with the geology we have in North Dakota.”