The Department of the Interior’s (DOI) Bureau of Land Management (BLM) plans to hold a lease sale on June 28 for 23 federally owned parcels spanning nearly 3,406 acres in Montana and North Dakota. 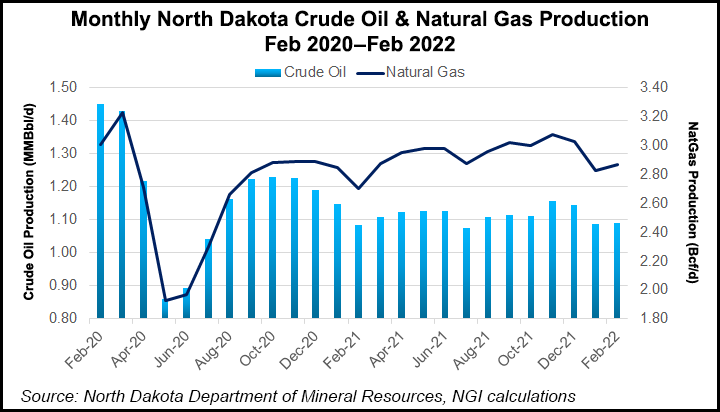 The sale notice issued by BLM’s Montana/Dakotas state office is part of a larger plan announced at the federal level to hold auctions on 144,000 acres of government land in compliance with a court ruling. A federal judge in Louisiana last year ordered the resumption of federal onshore and offshore lease sales. The sales had been paused by the Biden administration. One Gulf of Mexico lease sale was held, but its results were invalidated by a federal court.

Changes include “a first-ever increased royalty rate of 18.75% for the leases sold in the current competitive lease sales, in keeping with rates charged by states and private landowners,” BLM said.

The sale is “essentially a ditto of what was announced before and then canceled,” said Lynn Helms, director of North Dakota’s Department of Mineral Resources, during a briefing with reporters on Tuesday.

Federal policies around leasing are not the only challenge facing North Dakota’s oilpatch, which is centered around the mighty Bakken Shale.

In recent conversations with Bakken operators, Helms said he has mostly heard the same story, “that it’s difficult to get workforce. It is difficult to get capital.” As a result, Helms said operators that he’s spoken with are mostly forecasting 1-2% annual production growth. The operators are “not really starting that until the third quarter of this year,” according to Helms.

While North Dakota has managed to add a few drilling rigs of late, “all but one of our drilling rig operators has moved 90%-plus of their iron to the Permian,” Helms said. “So the actual physical rigs, for the most part, aren’t here anymore.”

[Is it really an energy transition? Liberty Energy CEO Chris Wright explains why he thinks robust natural gas demand will endure and why the “energy transition,” in his view, is not really a transition at all – but rather a gradual shift to more varied sources of energy that could take centuries to fully develop. Listen to NGI’s Hub & Flow podcast now.]

An uptick in Williston Basin drilling helped the U.S. rig count inch two units higher for the week ended Friday (April 22), according to the latest tally from Baker Hughes Co.

The one remaining rig operator “has significant inventory that they could deploy…However they’re finding that they can only hire and train up a crew about every two months. So you’re looking at [adding] six rigs a year in a best-case scenario that could be added between now and mid-2023. So we’re not going to see rapid growth.”

During the conference to discuss the state’s energy progress, Helms was asked what companies have already increased hourly wages. He said in some cases it’s by $10/hour, “and that hasn’t flipped the switch.”

Firms in the Bakken increasingly are turning to “super-commuters,” i.e. workers who live outside the Bakken region but fly in to work for two-week stretches. This arrangement “is not the most desirable thing,” Helms said. He said officials are working on an initiative to promote oil and gas internships and training for high school juniors and seniors so that they may begin working in the oilfield when they graduate.

Over the long-term, “we’re going to have to grow our own” workforce in the state, Helms said. “And that’s the page that everybody is on.”

Helms has projected that gas production in the state will continue to rise even if oil output is flat, as routine flaring is cut and to capitalize on favorable pricing.

The statewide natural gas capture rate rose to 94% in February from 93% in January, with a rate of 95% for the Bakken.

North Dakota’s rig count stood at 38 as of Tuesday (April 19) after ending February and March at 34. One active rigs is drilling a carbon dioxide storage well, Helms said.

Preliminary figures show that statewide well completions totaled 53 in March, down from 90 in February. The March total, which Helms called a “healthy volume” of completions, was 33% above the state’s tax revenue forecast.

He cited that North Dakota operators have been steadily drawing down their inventory of drilled but uncompleted wells, part of a larger nationwide trend.