The average U.S. rig count in the final three months of this year should decline by about 2.5% from 2Q2013, a typical seasonal slowdown around the holidays, and above the pronounced drop in the same period of 2012, when the rig and well count fell by more than 5%, Baker Hughes Inc.’s CFO said Friday. 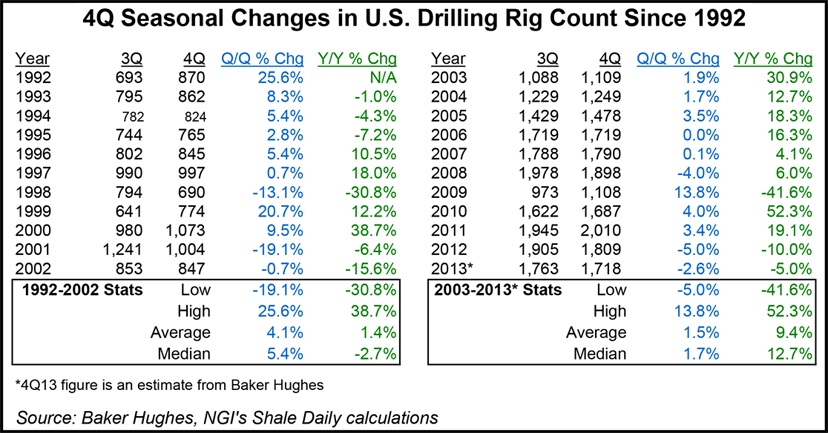 “We anticipate that the fourth quarter onshore rig count for the U.S. will average 1,660 rigs, comprised of 1,320 oil rigs and 340 gas rigs,” Peter Ragauss said during a conference call to discuss quarterly earnings. “This represents a decrease of about 45 rigs from the 3Q2013 average and 25 rigs from our latest weekly rig count.” The domestic rig count for 4Q2013 includes 58 active offshore rigs, unchanged from 3Q2013.

“The total average annual U.S. rig count for 2013 is now projected to be 1,750 rigs, which represents a 9% reduction compared to 2012,” he said. The Baker Hughes Well Count, published two weeks ago, estimated that the U.S. industry is now drilling about 6% more wells/rig compared with 2012 (see Shale Daily, Oct. 15). “Therefore, the U.S. onshore well count is expected to only decline 3% compared to 2012,” Ragauss said.

“Sequentially, we expect 4Q2013 North America revenues and profit margins will continue to improve,” said Ragauss. “Slightly higher activity levels in Canada and improved operational efficiencies in our U.S. pressure pumping business are expected to more than offset the 2.5% decline in U.S. onshore activity during the quarter. Gulf of Mexico activity should remain strong, aside from a one-week delay in activity due to Tropical Storm Karen earlier this month.”

North American revenue is at a record even though activity is down year/year, CEO Martin Craighead told analysts.

“This success can be attributed to the innovative products and services that Baker Hughes has introduced, which meaningfully improve the efficiency and economics of well construction and production for our customers,” he told analysts. His comments mirrored some by Schlumberger Ltd. CEO Paal Kibsgaard also on Friday (see related story).

Craighead pointed to Baker’s Rhino Bifuel stimulation technology used in pressure pumping, which substitutes up to 70% of diesel with liquefied natural gas (LNG). “Demand for this service has exceeded our expectations, and to date, we have completed several dozen wells in several hundred stages, with full fleets of Rhino Bifuel using LNG transported to location.”

Baker in the third quarter also achieved a milestone by fracturing its first series of wells using pipeline gas from the field, including 240 stages over 18 different wells in the Northeast and in the Rockies, he said. “The use of line gas on these projects displaced more than 100,000 gallons of diesel. In addition to reducing emissions, it also eliminated several shipments of fuel to rural areas, achieving significant cost savings.”

As well, the Houston operator invested in water sustainability projects, said Craighead. Baker’s H2prO service “is building momentum across a number of basins, including the Permian, the Marcellus and the Eagle Ford. In September, we achieved a significant milestone by treating 5 million barrels of produced water in a single month for the first time ever.

“Strength in water management is also helping us to differentiate our pressure pumping business. This quarter, we successfully performed a hydraulic fracture stimulation in the Permian Basin using 100% produced water. On this single project, H2prO technology prevented the consumption of more than 2 million gallons of potable water.”

Net income was $341 million (77 cents/share) in 3Q2013, well ahead of year-ago profits of $279 million (63 cents) a year earlier. Revenue rose 8% to $5.79 billion. North American revenue climbed 6% sequentially to $2.9 billion, with operating profits 10% higher, or 245 basis points. The growth was achieved primarily on seasonal recovery in Canada, tempered by flooding in Alberta early in the quarter.