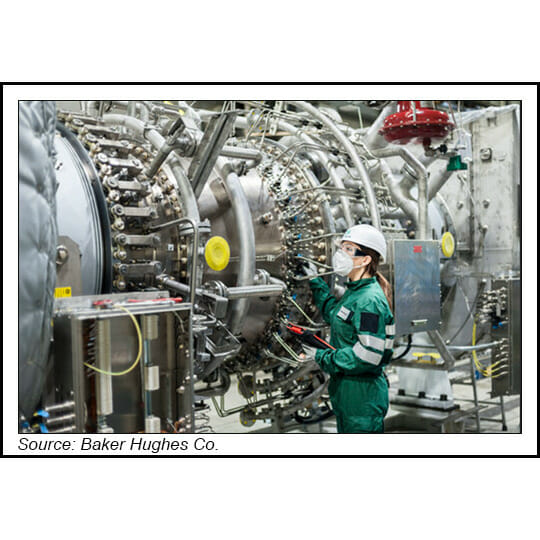 Simonelli shared first quarter results and the outlook for 2022 and beyond for the Houston-based oilfield services giant.

“We already saw momentum pick up in 2021” for expanding the “role of natural gas and LNG in energy transition,” he said. “Arguably, we see a multi-year reorganization of the global energy system, which will take time to evolve.” However, “we see signs of a pick up” in final investment decision (FID) activity for proposed LNG terminals to 2025.

“There are lots of projects in the United States, which should be a big beneficiary of redrawing the global energy map,” Simionelli said. Other areas expected to advance LNG terminals are the “Middle East, Mexico and also Asia.”

As Baker Hughes provides equipment for LNG projects, “we are well positioned with interesting concepts and the speed to market… we are feeling good about the LNG outlook for a number of years.”

“The need to diversify and provide energy security will likely intensify policy efforts” around the world, he said. “As the market dynamics play out, a number of projects should accelerate.”

Baker Hughes is now estimating that over the next two years, 100-150 million metric tons/year (mmty) of LNG capacity will achieve a positive final investment decision (FID). Additional FIDs “are becoming more likely in 2024 and 2025,” the CEO told analysts.

Because of current global gas prices and the “quickly changing dynamics,” global LNG capacity additions “will likely exceed” 100 mmty by 2030. “This compares to the current global installed base of 460 mmty and projects under construction totaling almost 150 mmty.”

Specifically in the United States, Baker Hughes during 1Q2022 was awarded a contract to provide a modular LNG system for the first phase of Venture Global LNG Inc.’s proposed Plaquemines project in Louisiana.

The TPS unit’s modular LNG designs, basically pre-assembled units, help to reduce time and costs overall. Since 1985, the company has supplied more than 70 pre-assembled and integrated power generation and compression modules around the world.

“We will be providing 24 modularized compression trains for the first phase” of Plaquemines, Simonelli noted. The award “is part of our 70 mmty master equipment supply agreement.”

“Calcasieu Pass holds the global record for the fastest construction of a large-scale greenfield LNG project, moving from FID to first LNG in 29 months,” he noted.

Beyond LNG advancements, though, Baker Hughes dealt with geopolitical constraints, a slow supply chain and labor issues as the year began.

Looking to the rest of 2022, the company is preparing for “perhaps the most challenging supply chain and inflationary environment we have seen in several decades,” Simonellli said.

“Recent and unfortunate geopolitical events are amplifying several trends, including broad based inflation and supply pressure for key materials, commodities and labor. Events are also driving changes on the economic front, where the world is transitioning from an era of strong economic growth to an environment that is more tenuous and likely to feature diverging economic conditions regionally.”

Simonelli said it may take “multiple years of spending growth” to help reduce geopolitical tensions on the oil and gas front. He also said there has to be a “significant increase in LNG infrastructure investment.

“While there is some near term risk on the demand side, we expect global oil and gas supply to remain constrained in the coming years, which should support higher commodity prices and multiple years of spending growth from our customers.”

In North America, drilling and completion activity “continues to move solidly higher, with further increases expected over the course of the year,” said the CEO. His comments about increasing North American activity this year echoed those on Tuesday by Halliburton Co. CEO Jeff Miller.

Current oil and gas prices “would normally suggest a stronger increase in activity,” Simonelli noted. However, a combination of capital discipline by U.S. exploration and production companies, as well as “industry shortages in labor and equipment, is likely to keep short-term incremental increases more moderate in the future.”

Revenue for the quarter was $4.84 billion, down 12% sequentially but 1% higher year/year.  Compared to the same quarter last year, revenue was up 1%, driven primarily by higher volume. Net income was $72 million (8 cents/share) in 1Q2022, reversing year-ago losses of $452 million (minus 62 cents).