A jumbo Chinese project has raised the volume of supplies earmarked for liquefied natural gas (LNG) exports from proposed Canadian terminals to 165.4 Tcf. 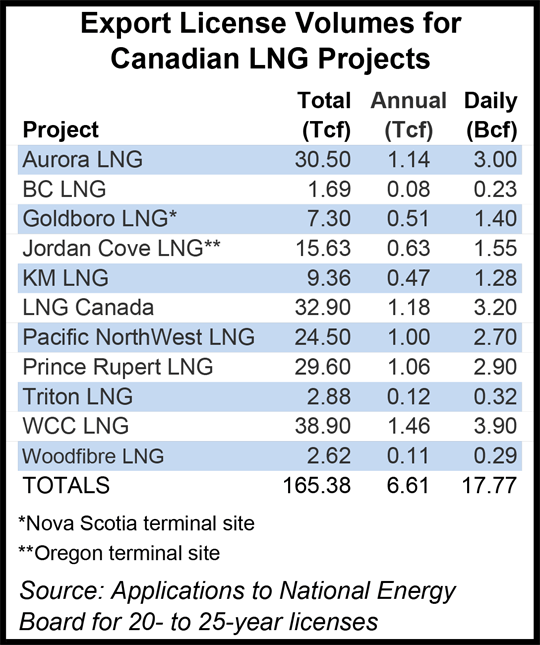 Aurora is the eleventh LNG scheme to request a long gas export license from Canada’s National Energy Board (NEB), and the third largest entry in the lineup after the 38.9 Tcf WCC project by Imperial Oil and ExxonMobil and the 32.9 Tcf LNG Canada scheme by Shell Canada.

Aurora is the ninth project with a proposed LNG terminal site on the Pacific coast of British Columbia. Like its peers in the long lineup, Aurora plans to rely on future BC shale gas production for virtually all export gas supplies.

Total tanker loadings — including Nova Scotia and Oregon terminals also proposed for Canadian exports — would hit 17.8 Bcf/d if all the projects were built.

INPEX and JGC are also minority partners of Nexen-CNOOC in developing about 300,000 acres (470 square miles, 1,220 square kilometers) of shale gas properties in three northern BC formations.

BC. shale production is still in early stages. Forecasts of recoverable reserves in the Aurora trio’s shale rights range from 9.3 Tcf to 38.3 Tcf, depending on economic expectations and results of adapting made-in-Texas horizontal drilling and hydraulic fracturing to BC conditions. The group is assuring the NEB that “third-party gas” is bound to be available as backup supplies from other BC shale producers.

Disclosures of the Aurora scheme remain sketchy. No cost estimates have been filed with the NEB.

The project has obtained a potential terminal site on public or Crown land, near Prince Rupert known as Grassy Point from the BC government for C$24 million (US$22.5 million).

Discussions are under way with pipeline companies currently proposing a variety of delivery routes from BC shale formations to the Pacific coast, but the talks are in early preliminary stages, says Nexen-CNOOC.

The Aurora schedule calls for the first two of four planned LNG production “trains” to start loading up tankers sometime in the 2021-23 period.

No customers or sales contracts have been revealed. But the gas export license application reminds the NEB that China’s state-controlled CNOOC Group also includes CNOOC Gas & Power Ltd., which currently has 2.6 Bcf/d of Chinese LNG import capacity in operation or under construction and has declared intentions to increase its intake to 7.4 Bcf/d by 2020.