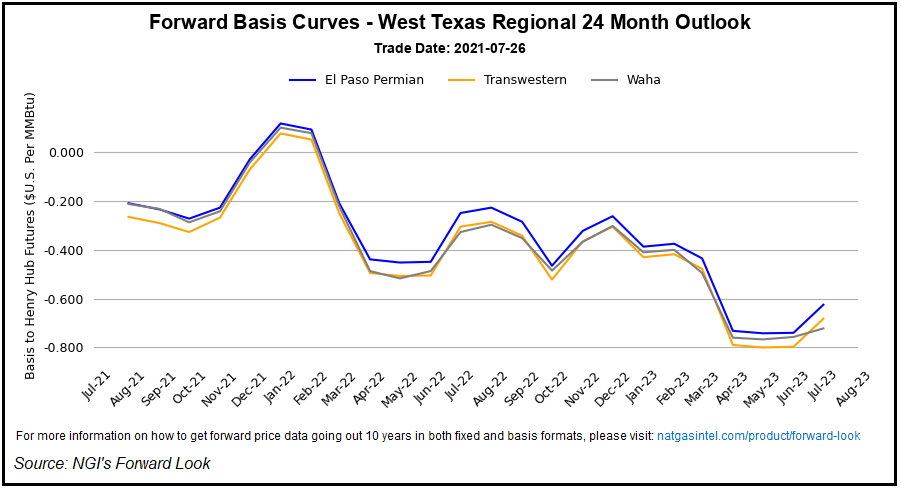 The prompt month rolls off the books at the close of trading Wednesday. Selling and profit-taking is common ahead of expiry, and Tuesday proved no exception, said StoneX Financial Inc.’s Thomas Saal.

National Weather Service (NWS) data showed intense heat across much of the Lower 48 Tuesday and through most of the trading week. Hot high pressure spans much of the country, generating highs of 90s to well into the 100s, with lofty temperatures from Dallas up to Chicago and over to New York City.

High temperatures, however, were expected to drop back into the 80s over swaths of the Midwest and East over the coming weekend and early next week, according to NWS. This could pull domestic weather driven-demand back to normal seasonal levels in early August.

“With the models continuing to shed” cooling degree days, “the price trajectory later this week could reveal a great deal regarding likely price trends in August,” EBW Analytics Group said. The EBW analysts said cash prices could pull back further next week, given the outlook, and this could put downward pressure on futures prices.

“While this remains a likely scenario, recent trading suggests that the market believes the entire forward curve is underpriced,” the EBW analysts said, referring to the seven-day futures rally that preceded Tuesday’s trading. “If this sentiment is powerful enough, it could limit the decline.”

Production estimates hung around 91 Bcf on Tuesday, on par with previous days this week and last but below the 92 Bcf/d average last month.

U.S. exports of LNG expanded notably over the first six months of 2021, averaging 9.6 Bcf/d, the U.S. Energy Information Administration (EIA) said in a research note Tuesday. That marked an increase of 42%, or 2.8 Bcf/d, from the same period in 2020.

“We expect LNG exports to remain at high levels in the remaining months of this year,” researchers said.

With output running shy of demand in recent weeks, analysts increasingly are expressing concern that stockpiles of gas needed for the winter could prove insufficient.

“Based on our projections for the next few EIA numbers (including our estimate of 41 Bcf for this week), the supply/demand balance remains too tight to get us to a comfortable storage level by the end of injection season,” Bespoke Weather Services said.

“We feel folks will continue buying dips, in general, until production rises even more, though daily price swings both ways can remain significant,” the firm added.

Looking ahead to this Thursday’s report for the week ended July 23, early Bloomberg survey results showed analysts estimating injections in the range of 39 Bcf to 49 Bcf, with a median of 42 Bcf. NGI is modeling a 49 Bcf injection.

Next-day cash prices lost ground Tuesday – after advancing 16.0 cents on Monday. Near-term heat remained intense and permeated much of the country, but prices in the central U.S. and East retreated ahead of an expected milder turn later this week.

Maxar’s Weather Desk noted Tuesday cooler changes in both the six- to 10-day and 11- to 15-day periods in its latest forecast.

For its outlook covering Sunday through Aug. 5, the changes were focused on the eastern two thirds of the Lower 48. “High pressure will be sent southward from Canada and into the Midwest and East, supplying and reinforcing below normal temperatures,” said Maxar’s Steve Silver, a senior meteorologist. “The feature pushes farther south than in earlier outlooks, likewise sending a frontal boundary southward.”

Cooler adjustments in Maxar’s projections for Aug. 6-10, meanwhile, were concentrated in the Midcontinent and South. As a result of the large-scale pattern for the period, “durable heat should lack in the eastern half, where the forecast is near normal with temperatures,” Silver said. “Above-normal readings favor the West, which has been the case for most of the summer in response to the ongoing drought.”