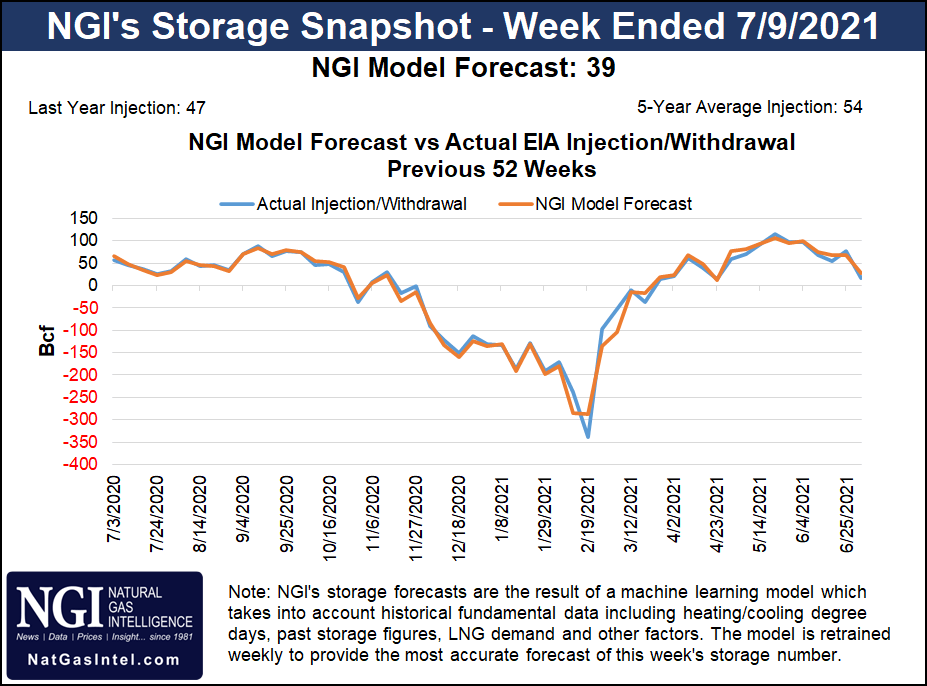 The August Nymex contract ultimately fell 3.6 cents day/day and settled at $3.660/MMBtu on Wednesday. The prompt month had shed 5.3 cents a day earlier. The September contract slipped 3.4 cents on Wednesday to $3.648.

NGI’s Spot Gas National Avg. moved sideways through most of the day, finishing up 2.0 cents to $3.635.

While demand this week is holding strong, bolstered by persistent heat in the West and upper high pressure over large swaths of the East Coast, forecasts called for eased cooling needs next week. NatGasWeather said weather systems would track across the Great Lakes and East this coming weekend and next week, an outlook that cut several cooling degree days (CDD) from earlier forecasts.

Both the domestic and European weather models maintained a hotter pattern for the last week of July, the firm said, “although this has been delayed by one to two days in recent data due to cooler trends.”

“We continue to see a general lack of heat in the pattern compared to what was expected previously, with the 15-day period, along with July as a whole, looking to come in easily cooler than the five- and 10-year normal,” the firm said Wednesday.

In total, Bespoke’s projections showed gas-weighted degree days for July at slightly under 350, “which would be the lowest July total since 2015, and well under last July’s total of 386.”

The forecasts overshadowed data elsewhere that was favorable for gas prices. Production declined for a second day and dipped below 90 Bcf in early estimates Wednesday. That was notably below the 92-93 Bcf highs in recent weeks.

LNG feed gas volumes, meanwhile, climbed back above 11 Bcf Wednesday after hovering closer to 10 Bcf for a few days because of maintenance work. Several analysts have projected that LNG levels could steadily exceed 11 Bcf in the second half of the summer – barring surprise maintenance work – and potentially eclipse 12 Bcf to set a new record.

Demand for U.S. exports of LNG is running high from both Asia and Europe, following cold winters that depleted stockpiles and several hot weeks to start the summer. Even with recent maintenance work curbing volumes, LNG demand “comparisons have averaged a startling 7.3 Bcf/d higher year-over-year for the past three weeks,” EBW Analytics Group said.

It “could move the market significantly — potentially in either direction,” the EBW team said.

The median results would modestly surpass the actual increase of 47 Bcf a year earlier but fall short of the five-year average of 54 Bcf, according to EIA.

For the week ended July 2, EIA reported a 16 Bcf injection into storage, a result that came in below the lowest estimates found by major polls. Total working gas in storage stood at 2,574 Bcf — 551 Bcf below year-ago levels and 190 Bcf below the five-year average.

Spot gas prices essentially held steady at the national level and traded in narrow ranges at most individual hubs across the Lower 48.

Demand held strong, NatGasWeather noted, but prices had surged earlier in July and leveled off Wednesday as traders pondered outlooks for lighter demand next week.

In the West, where prices have been volatile this week amid intense heat but raging wildfires that have forced evacuations and curbed demand in some areas, hubs reported a mix of price action. KRGT Del Pool lost 31.5 cents day/day to average $5.910, while Malin gained 7.0 cents to $3.430 and Southern Border, PG&E eked out a half-cent gain to $3.430.

A combination of heat and severe drought fanned the flames of 68 wildfires across the West as of Wednesday afternoon, according to the National Interagency Fire Center. The largest, the Bootleg Fire in Southern Oregon, had burned more than 200,000 acres.

National demand remained solid by normal mid-summer standards, NatGasWeather said, with highs in the 80s and 90s across the East and much of the South. Lofty temperatures permeated most of the western United States, with highs ranging from the 90s to 100s.

However, the firm said cooling needs would lighten this weekend and the trend would extend into next week, with highs falling into the 70s over parts of the Midwest, Great Lakes and East. Against that backdrop, prices were mixed in the East as well. PNGTS rose 22.0 cents to $4.175. Niagara, however, fell 10.5 cents to $3.255 and Tenn Zone 4 200L lost 8.0 cents to $3.245.