Conditions are ripe for another above-average hurricane season that could potentially send ripples throughout natural gas production in the Gulf of Mexico (GOM) over the next three months, the National Oceanic and Atmospheric Administration (NOAA) said in a new forecast. 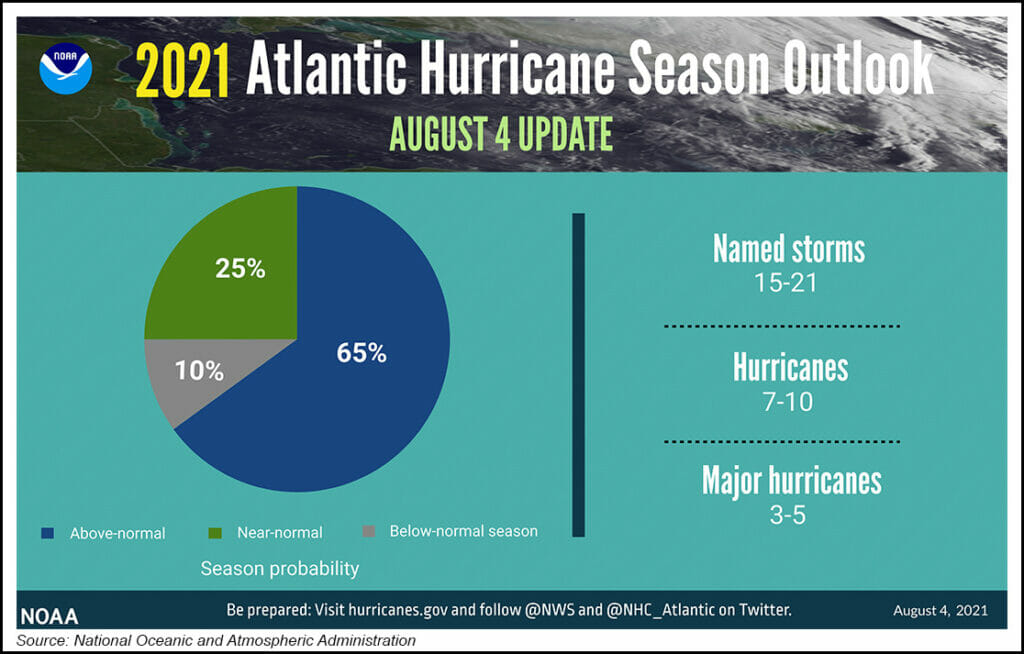 Should the NOAA’s Climate Prediction Center forecast bear out, it would mark the sixth consecutive year of above-average tropical storm activity. In 2020, there were 30 named storms – the most active on record – and a dozen made landfall in the continental United States. The previous record for the most storms was 28 in 2005.

“A mix of competing oceanic and atmospheric conditions generally favor above-average activity for the remainder of the Atlantic hurricane season, including the potential return of La Nina in the months ahead,” said lead seasonal hurricane forecaster Matthew Rosencrans at NOAA’s Climate Prediction Center (CPC).

The hurricane season, which officially runs from June through November, generated multiple storms in 2020 that pushed into the Gulf Coast and interrupted natural gas production on several occasions over the summer and early fall.

Meteorologists at Colorado State University in April also predicted an above-average storm season. They forecasted four major hurricanes in the Atlantic Basin this year, with at least one likely making landfall on the U.S. coastline.

Rosencrans told reporters Wednesday that Atlantic sea surface temperatures are not expected to be as warm as in 2020. However, reduced vertical wind shear and an enhanced west Africa monsoon are likely to contribute to an increase in seasonal hurricane activity after a relatively mild July.

The updated outlook included the five named storms that have formed so far – four prior to July — with Hurricane Elsa becoming the earliest fifth named storm on record early last month. It marked the most active launch of the hurricane season to date.

“After a record-setting start, the 2021 Atlantic hurricane season does not show any signs of relenting as it enters the peak months ahead,” said NOAA administrator Rick Spinrad.

U.S. natural gas production in July and early August hovered near 90 Bcf/d, off highs of 92-93 Bcf/d in June. It is also below the level many forecasters say is needed to keep pace with mounting demand amid a hot summer and continued strong demand for U.S exports of liquefied natural gas.

Against that backdrop, analysts said there is little room for hurricane-induced production disruptions this year without affecting already vulnerable storage supplies of natural gas for the coming winter.The U.S. Energy Information Administration has consistently reported light natural gas storage injections this summer that could leave inventories for winter anemic. Storage data continue to show “tight supply/demand balances, and that likely will remain the case until production can make a significant push higher,” Bespoke Weather Services said.