The Atlantic hurricane season, not yet over for 2020, has set a record with 30 named storms and 12 that made landfall in the continental United States, the National Oceanic and Atmospheric Administration (NOAA) said Tuesday. 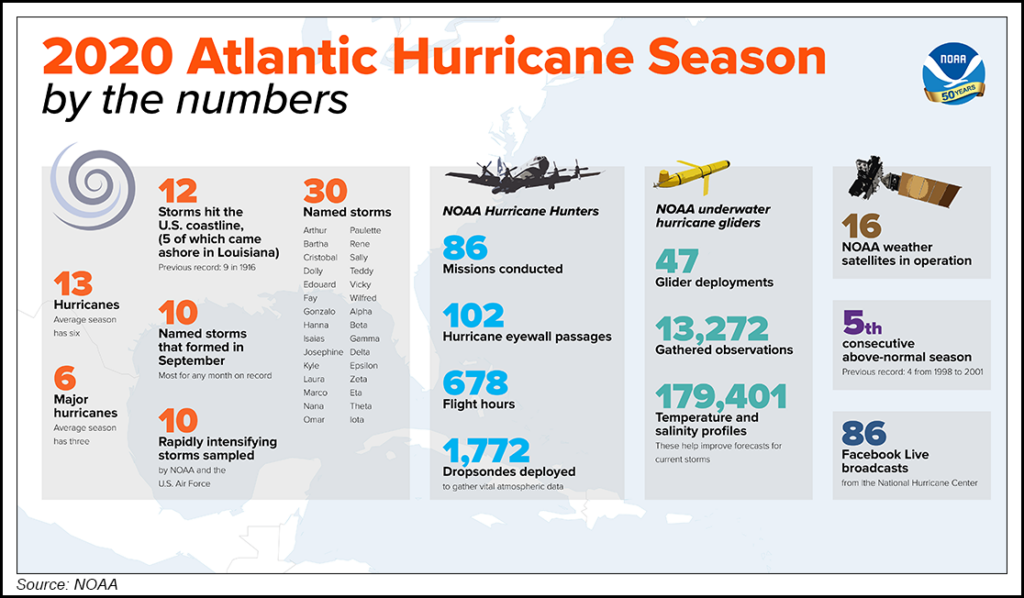 The previous record for the most storms was 28 in 2005. The season “ramped up quickly and broke records across the board,” said Acting NOAA administrator Neil Jacobs.

The official hurricane season officially concludes on Nov. 30, though given the intense activity of this year, NOAA cautioned that tropical storms may continue to develop into December.

Of the 30 named storms, 13 became hurricanes — top winds of 74 mph or greater — including six major hurricanes with winds of 111 mph or higher.

Multiple storms that pushed into the Gulf Coast interrupted U.S. natural gas production on several occasions over the summer and early fall. Hurricanes and tropical storms contributed to temporary but notable declines in output that delayed recovery from the curtailments producers imposed amid the immediate aftermath of coronavirus outbreaks last spring.

Lower 48 production finally reached 90 Bcf/d in mid-November, the level at which it hovered prior to the pandemic and roughly 4 Bcf/d higher than it was at the same point in mid-October.

This hurricane season started early and fast, NOAA said, with a record nine named storms from May through July. The pace held steady into the fall, with the 21-name Atlantic list completed with Tropical Storm Wilfred on Sept. 18.

For only the second time on record, the Greek alphabet was used for the remainder of the season. To date, it has reached the ninth name on the list, Iota.

“This is the fifth consecutive year with an above-normal Atlantic hurricane season, with 18 above-normal seasons out of the past 26,” NOAA said. “Such active eras for Atlantic hurricanes have historically lasted about 25 to 40 years.” The administration said an average Atlantic storm season has 12 named storms, six hurricanes, and three major hurricanes. “This historic hurricane season saw record water levels in several locations, including the Gulf Coast, where Hurricane Sally brought the highest observed water levels since Hurricane Katrina in 2005,” NOAA said.