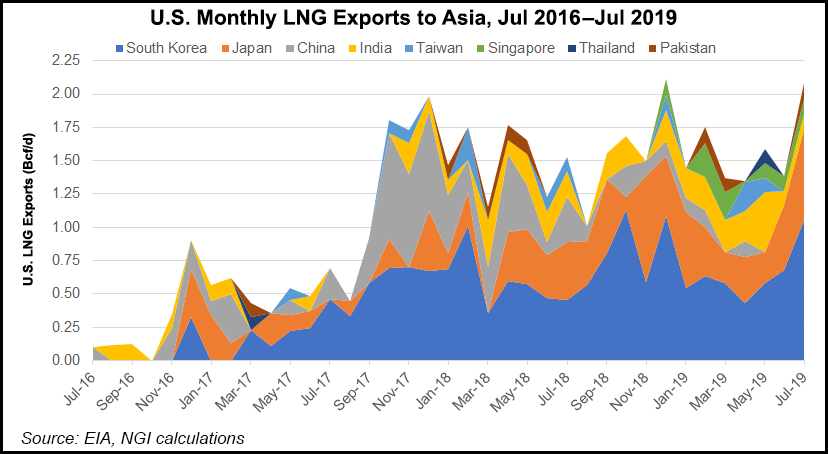 “For most new term contracts, we basically try to win deals that come destination-free,” Tokyo Gas President Takashi Uchida said in late September. “For our existing long-term contracts such as 20-year contracts, we are trying to renegotiate to gain flexibility in destination when prices are reviewed.”

Historically, most Asian LNG supply contracts have been long-term sale and purchase agreements (SPA) for 20 years or more, with an option to extend or renew. Long-term SPAs typically include price review clauses, which are reviewed every four or five years. Contracts that accept a close price link to oil prices are naturally exposed to price reviews.

In 2017 Japan’s Free Trade Commission ruled that destination clauses in contracts that prevented reselling contracted LNG cargoes were anti-competitive and therefore illegal. Yet, in the ensuing two years few Japanese buyers have pressed the commission’s ruling in their existing deals, preferring to hold off on enforcing the ruling when long-term deals are up for renegotiation or when they sign new SPAs.

Tokyo Gas has also stepped up its efforts to diversify supply sources and price formulas by using different types of pricing indexes in an effort to improve competitiveness, Uchida said.

The utility in April signed an unprecedented LNG supply deal indexed to coal prices with a unit of Royal Dutch Shell plc. Tokyo Gas in the deal would buy 500,000 metric tons/year for 10 years beginning next April. A pricing formula based on coal indexing is to be used for part of the supply, while the rest of it would be priced off conventional gas and oil-linked indexes.

Price reviews and changes in destination clauses indicate further fundamental and structural shifts in LNG markets in the Asia-Pacific region, particularly among the region’s legacy buyers.

Osaka Gas, one of Japan’s largest utilities, in July said it had begun a price review arbitration against the PNG LNG project, marking the first time a Japanese buyer made such a move. And in August, India’s top gas importer Petronet LNG said it was considering renegotiating long-term supply deals if spot prices remained weak.

Warmer temperatures in the northern hemisphere, ample gas inventories in China, Japan and South Korea heading into the winter season, and more supply still entering the market may force LNG producers to continue to rethink their business models.

Instead of relying on healthy profits from existing SPAs and signing long-term and even mid-term supply deals, producers are looking to invest more in the downstream market, particularly in developing countries where demand for gas exists but where there have been entry barriers.

Options for producers include investing in regasification terminals, pipelines, power plants and more small-scale LNG projects. Small-scale LNG is particularly suited for archipelago countries in Southeast Asia like the Philippines and Indonesia, which together have hundreds of stranded islands that rely on oil or coal for power generation. Companies may also invest in LNG-to-power facilities, similar to several proposals now on the table in Vietnam.

Some companies are already taking action.

Total SA, second only to Shell in supplying LNG globally, recently expanded its business footprint in France by investing in gas power plants and strengthening its electricity generation capacity.

Diversification across the energy value chain may not make as large returns as traditional long-term SPAs but investing across these assets could provide a positive return, offer much needed diversity in a market awash in gas and create gas demand where it might otherwise not exist.