With the hottest temperatures of the summer expected to soon reside in the market’s rearview, natural gas forwards receded during the Aug. 5-11 trading week, including large markdowns in the western United States, NGI’s Forward Look data show. 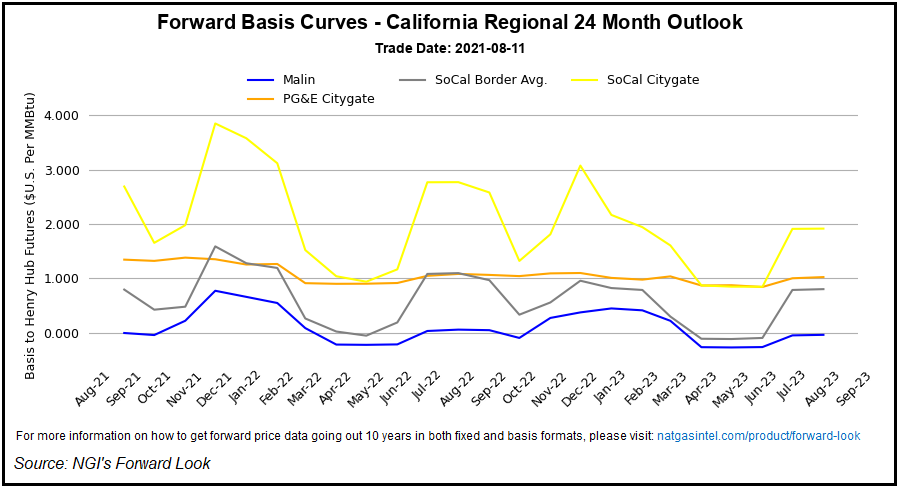 Discounts of around a dime or more in fixed price prompt-month forwards were the norm for most Lower 48 hubs, keeping pace with an 8.1-cent decline at national benchmark Henry Hub during the period.

After breaking decisively above $4/MMBtu, Nymex Henry Hub futures saw their fortunes change during the Aug. 5-11 time frame, a slump that continued into the weekend. As of Friday’s settlement, a 7.2-cent slide to $3.861, the September contract had posted losses in four out of the previous five sessions.

The September contract came under downward pressure earlier in the week amid declines in liquefied natural gas (LNG) feed gas demand, a modest uptick in production and a drop in cooling demand. That coincided with a 255% week/week spike in wind output in the Electric Reliability Council of Texas (aka ERCOT) territory, according to analysts at EBW Analytics Group. ERCOT handles the grid for around 90% of Texas.

“There is a risk of demand falling off after this week’s peak heat passes…with LNG subdued and the tropics stirring,” the EBW analysts said.

Still, the firm said the medium-term seasonal outlook remains “robustly bullish,” driven by potential LNG export capacity additions “and the second-lowest storage trajectory of the decade. But tropical threats could lead to periodic downdrafts as the market enters the heart of hurricane season.”

The recent storage trajectory raises the prospect of “potentially explosive upside price risks this winter,” the EBW analysts added, That may support higher prices throughout the fall. “…With gas-to-coal switching nearing exhaustion, there are few significant mechanisms to contain natural gas prices from shooting up toward $8-12/MMBtu before shutting in LNG exports. Mexican exports, industrial demand and gas-to-oil switching can all contribute a degree of loosening, but the veneer is thin.”

In the short term, after revealing a lean 13 Bcf build in the prior week’s report, the Energy Information Administration (EIA) on Thursday reported an on-target 49 Bcf injection into U.S. natural gas stocks for the week ending Aug. 6. The build compared with a 55 Bcf year-ago injection and a five-year average 42 Bcf build.

Next week’s inventory data will reflect the “hottest week of summer, but it will not be the lowest build,” Bespoke Weather Services told clients after the EIA data hit the market. Higher wind generation and lower LNG sendout “have loosened things considerably…The key will be how much we re-tighten once wind falls the next few days,” and the market has “some LNG volumes back in play.”

As gas has occupied an “undeniably sticky” share of the thermal generation stack this summer, the “margin of error for storage adequacy” has been shrinking as the projected end-October carryout has approached 3.5 Tcf, according to Energy Aspects.

The firm said in a recent note its modeled carryout in the 3.50-3.55 Tcf range “has been nearly unflappable over the course of the summer as we have previously raised prices to keep stocks near that thinly balanced end-of-season estimate.” Prior to this past week, prices had been “treading into the territory where much switching capacity will soon be exhausted.

“However, we must caveat that the scale of switching at $4 on a normal September or October day is far different than what is available in peak cooling season, so we still believe we will see gas’ share of thermal generation back off as national power load normalizes for the shoulder season.”

From a regional perspective, the biggest basis movers during the Aug. 5-11 trading week occurred west of the Rocky Mountains. A number of hubs in California and the Pacific Northwest saw their premiums ease noticeably during the period.

Price trends through the western third of the country suggested a market viewing the past week’s heat as the likely peak of what has proved sweltering summer weather.

Maxar’s Weather Desk as of Thursday showed intense heat in the Northwest in the one- to five-day time frame receding to near- or slightly above normal levels for days six through 15 of the forecast period. Seattle, for example, was expected to see high temperatures drop into the mid 70s by Monday and Tuesday, a stark contrast to highs in the mid-90s heading into the weekend.

From this coming Tuesday through Aug. 21, “a trough will deepen over the Rockies, tapping into the monsoonal moisture for a wetter than normal period in the Rockies and Plains. The forecast trends cooler here as a result,” Maxar said.

Meanwhile, north of the border in Canada, NOVA/AECO C, already trading at a steep discount, saw its basis widen further during the Aug. 5-11 period, with September prices going from minus $1.227 to minus $1.271.

“Maintenance is expected to wrap up as early as this coming Sunday, which should ease basis,” the TPH analysts said in a note to clients Thursday. However, relief could be brief “with another slug of maintenance poised to limit capacity to 10.6 Bcf/d from Sept. 7-Oct. 4 before increasing towards 11.7 Bcf/d (from 11.2 Bcf/d capacity prior to this slate of maintenance) in the fourth quarter.”

Longer term, NGTL is set to see another incremental 1.45 Bcf/d of capacity come online through the end of 2022, according to TPH.

“So while we’d expect the present volatility to once again crop up in September, even the shift toward 11.7 Bcf/d in 4Q2021 is expected to keep this from being a structural concern,” the analysts said.