Saudi Arabia’s state-owned oil and gas company is raising its capital spending, but whether it increases production is another story despite record profits in the first quarter. 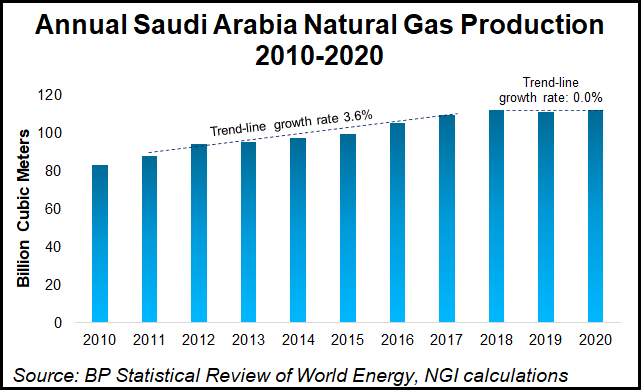 Unlike most of its oil and gas peers, Saudi Arabian Oil Co., aka Aramco, plans to increase this year’s capital expenditures to $40-50 billion from nearly $32 billion in 2021.

Aramco, majority owned by the royal family, also has an array of environmental, social and governance (ESG) initiatives underway to reduce its global footprint as it moves to achieve net-zero greenhouse gas emissions across the portfolio by 2050.

“As we collaborate with domestic and international partners to explore new and emerging technologies and solutions, from developing cleaner transport technologies to establishing low-carbon hydrogen and ammonia value chains, I am more optimistic than ever about the positive contribution we can make, both to our customers and to the ongoing global energy transition,” Nasser said.

Fueled by the continued recovery in global energy demand, average hydrocarbon production from the Upstream business was 13 million boe/d in 1Q2022. In the year-ago quarter, average output was 11.5 million boe/d. During 2021, output averaged 12.3 million boe/d.

Natural gas output, which is on track to grow by 50% in 2030, is getting support from expansions in the country’s Haradh and Hawiyah fields. The projects, scheduled to be onstream by year’s end, would increase gas compression by 1.3 Bcf/d. In addition, the Hawiyah Gas Plant expansion, part of the Haradh Gas increment program, should ramp up in 2023.

Capital spending in 1Q2022 was $7.6 billion, down by 10% from 1Q2021, “mainly due to certain gas projects nearing completion,” management said. Capital outlays are set to increase “until around the middle of the decade, to support the company’s long-term strategy realization.”

Meanwhile, Aramco completed a lease and leaseback deal for its natural gas pipeline network with an investor consortium led by BlackRock Real Assets and Hassana Investment Co. With an upfront payment of $15.5 billion, the consortium acquired a minority (49%) stake in new subsidiary Aramco Gas Pipelines Co.

The long-term strategy in the Downstream business remains centered around integrating with the Upstream operations. The plan is to optimize the portfolio and build out in “high-growth areas,” Nasser said.

“In doing so, Aramco captures additional value across the hydrocarbon chain, expands its sources of earnings, and provides resilience to oil price volatility.”

Downstream consumed almost 45% of Aramco’s crude production during 1Q2022. The company also achieved 99.9% reliability “in its deliveries to customers” in the quarter.

To expand its global downstream operations, Aramco is acquiring a 30% stake in a 210,000 b/d refinery in Gdansk, Poland, along with sole ownership of an associated wholesale business. Aramco also agreed to acquire a half-stake in a Polish jet fuel marketing joint venture with BP plc. And in China, the company also made a final investment decision to participate in developing a 300,000 b/d integrated refinery and petrochemical complex.

New collaborations established in the first quarter build on the global research and development network to advance low-emission transport solutions. In addition, the executive team said Aramco’s “supply chain resilience was enhanced” through an agreement with the Kingdom. The flagship iktva program aims to build a “diverse, sustainable and globally competitive” supply chain to supply the Kingdom’s energy sector.

In addition, a memorandum of understanding in March would make Aramco one of five inaugural partners in the Middle East and North Africa regional voluntary carbon market (VCM). The market was established by the Public Investment Fund, the country’s sovereign wealth fund.

The VCM, the first of its kind in the region, is to serve as a platform to buy, sell and trade verified carbon equivalent credit certificates.

The dividend plan, to pay $18.8 billion in the second quarter, is unchanged. However, the company plans to distribute one bonus share to stockholders for every 10 shares held. Most of the payout would be to the Kingdom, which owns the majority of shares.