Saudi Arabia’s state-owned oil company is looking to expand its natural gas business by skipping over the traditional export route and going for a growing market in blue hydrogen, executives said Monday. 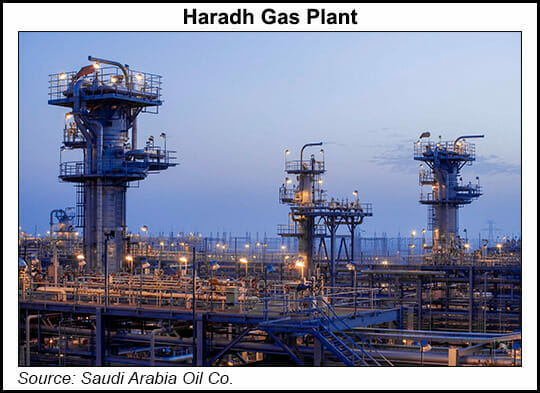 Saudi Arabia Oil Co., better known as Aramco, is the largest oil exporter in the world. It also has a plethora of natural gas reserves, CEO Amin H. Nasser noted during a conference call to discuss 2020 results Monday. He shared a microphone with Aramco’s Khalid Al-Dabbagh, senior vice president of Finance Strategy & Development.

“Our gas is growing at twice the rate of crude globally,” Al-Dabbagh told analysts. Because gas also has a lower carbon footprint, it has become “important strategically…We continue to be interested in international gas,” including liquefied natural gas (LNG), because “it’s a great opportunity.”

Aramco also has a “huge advantage” because of its conventional and unconventional oil and gas stores, Al-Dabbagh said. The producer has “economy of scale when you look at our facilities and their proximity to each other. We do have the advantaged geology and integrated operational platform.”

Aramco, however, is looking beyond simply exporting gas. Executives want to use the gas to underpin blue hydrogen exports as the energy world shifts toward low carbon emissions. Blue hydrogen is manufactured from natural gas, with emissions reduced through carbon capture utilization and storage, or CCUS.

“Having a large-scale cost-competitive carbon capture utilization and sequestration potential in the Kingdom is big for us,” Al-Dabbagh said. “We are looking at hydrogen in terms of utilization and exporting, rather than growing that to the LNG profile.”

Aramco’s priority is to supply the Kingdom with gas. Once it satisfies the Kingdom’s requirements and in coordination with the Ministry of Energy, “if there is additional gas and currently there is, we are looking at that additional gas in terms of shifting it to hydrogen — blue hydrogen rather than LNG.

“We are looking at skipping one step,” said the finance chief. Instead of “going to LNG,’ Aramco would take the gas “directly to hydrogen…We have all the elements to make it successful. We have the scale and experience, and it makes a lot of sense for us…in terms of shifting gas to hydrogen.”

The executives cited the blue ammonia export pilot completed last September. Aramco and the Institute of Energy Economics in Japan, in partnership with Saudi Basic Industries Corp. aka SABIC, produced and shipped 40 tons of blue ammonia to Japan for use in zero-carbon power production. The supply network demonstration spanned the full value chain, converting hydrocarbons to hydrogen and then to ammonia, as well capturing carbon dioxide (CO2) emissions.

SABIC’s Fahad Al-Sherehy, vice president of Energy Efficiency and Carbon Management, said the Saudi unit could “economically leverage our existing infrastructure for hydrogen and ammonia production with CO2 capture. Our experience in the full supply chain along with integrated petrochemicals facilities will play an important role in providing blue ammonia to the world.”

The blue ammonia transport was the first of its kind in the world, according to Nasser.

“We wanted to make sure it can be done, and it was done.” The CO2 was sequestered in Japan. “We looked at the cost, but as you know, this is a pilot program,” he noted. From start to finish, the pilot cost “almost” $5 billion.

“We are looking at hydrogen, or blue ammonia, in that scheme. And when you look at that on a big scale, the cost will go down. There are a number of elements,” Nasser said.

“Also, you need to consider what is the cost of gas that will be the feed? What is the cost of sequestration and what is the scale that we are talking about and the proximity of the aquifer that we will be utilizing for sequestration to the source? All of these elements right now are being looked at. And of course, the most important thing is the market, because we are talking about bigger scale.”

Work is ongoing today with the Ministry of Energy to advance blue hydrogen projects, Al-Dabbagh said. “At the same time, we will ask the question about carbon emissions and whether there is something else other than traditional carbon capture and sequestration.”

Among other things, Aramco’s research and development arm is investing in technologies for direct air capture (DAC) of carbon emissions. DAC technology is being tested worldwide, with a separate Permian Basin pilot underway by Occidental Petroleum Corp.

“What we are aiming for, of course, is reducing the cost,” Al-Dabbagh said. “The issue with direct capture today is it costs a lot to achieve the right results in terms of reducing the emissions.”

Aramco’s average hydrocarbon production in 2020 was 12.4 million boe/d, including 9.2 million b/d of oil.

Last year was Aramco’s first full year as a public company. It did not report quarterly earnings. For 2020, even in the face of pandemic, which sharply reduced oil demand, Aramco generated an average 13.2% return on capital employed. Net income was $49 billion.

This year, capital expenditures are set at around $35 billion, down from original guidance of $40-45 billion and versus $27 billion in 2020.

“Looking ahead, our long-term strategy to optimize our oil and gas portfolio is on track and, as the macro environment improves, we are seeing a pick-up in demand in Asia and also positive signs elsewhere,” Nasser said. “We remain confident that we will emerge on the other side of this pandemic in a position of strength.”