Physical natural gas values for the two-day April trading week that ended Friday saw gains nearly across the board, led by the Northeastern region, which was expected to see one last shot of winter cold over the weekend. 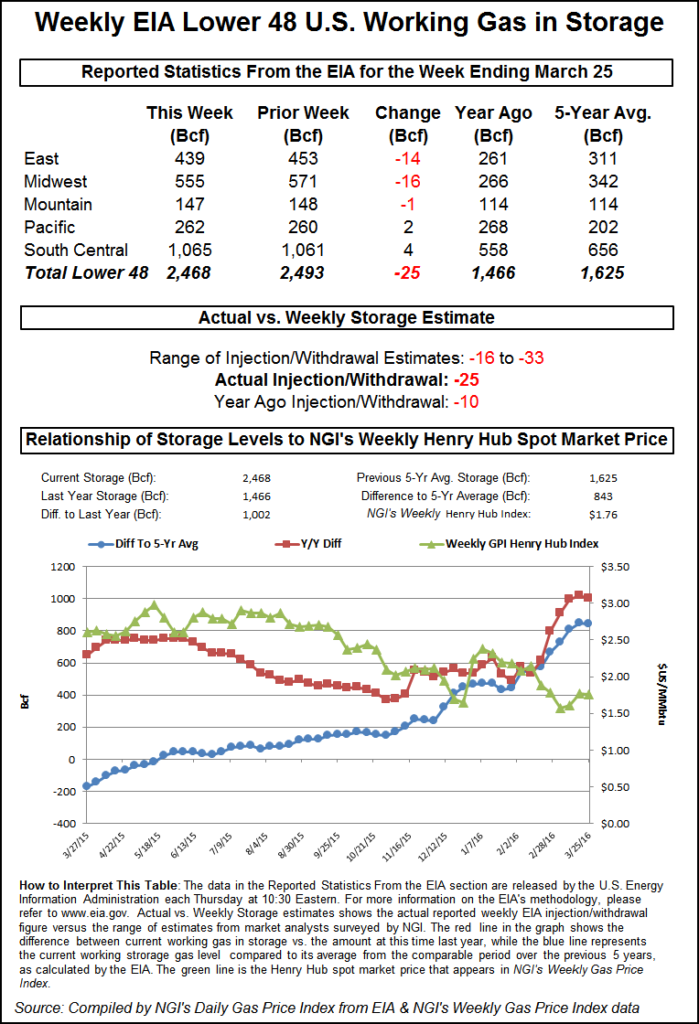 NGI‘s National Spot Gas Average picked up 11 cents for the week to average $1.75, and gains were prevalent across the country except for a couple of Rockies locations and at the PG&E Citygate in California, which recorded declines of between a penny to 7 cents.

Over in the futures arena, the April contract expired on Tuesday March 29 at $1.903, up 19.2 cents from the March contract settlement. May, as the new front-month contract, added 7.4 cents from the previous Thursday’s close to this Friday’s $1.956 settle.

A day later, much was still being made of the natural gas storage report for the week ending March 25, which saw injections flop back to withdrawals for a week.

On Thursday the Energy Information Administration (EIA) reported a withdrawal of 25 Bcf from storage for the week ending March 25, and in spite of the fact that most traders were expecting a pull about 3 Bcf lower, futures prices eased.

Estimates for the Thursday morning EIA storage report were coming in widely dispersed. Last year 10 Bcf was withdrawn, and the five-year pace is for a 22 Bcf decline. Ritterbusch and Associates was calculating a 16 Bcf pull, and a Reuters survey of 24 traders and analysts revealed an average 22 Bcf withdrawal with a range of 16 to 33 Bcf. ICAP Energy figured on a 28 Bcf decline.

Last week’s 15 Bcf build caught a number of analysts off guard as it was about 7 Bcf less than what was expected, but that wasn’t the case this week. May futures were trading at $2.015 when the EIA data rattled across trading screens and by 10:45 a.m. EDT May was trading at $1.985, down 1.1 cents from Wednesday’s settlement.

Could supply be getting a little tighter? “The 25 Bcf draw for last week was somewhat more than expected and marginally supportive compared with the 22-Bcf five-year average for the date,” said Tim Evans of Citi Futures Perspective. “It also suggests a somewhat tighter supply-demand balance baseline that may carry over into future periods.”

Inventories now stand at 2,468 Bcf and are a stout 1,002 Bcf greater than last year and 843 Bcf more than the five-year average. In the East Region 14 Bcf was withdrawn and the Midwest Region saw inventories fall by 16 Bcf. Stocks in the Mountain Region fell 1 Bcf, and the Pacific Region was higher by 2 Bcf. The South Central Region added 4 Bcf.

Record high inventories in the Lone Star State may make finding storage capacity in Texas arduous at best. According to industry consultant Genscape “storage monitors are indicating Texas’ combined inventory currently stands at approximately 695 Bcf, the highest March inventory in history. Texas inventory for March 2016 will come in close to 46 Bcf higher than in March 2012. At each of the seven facilities monitored, activity has either stagnated or transitioned to steady injections over the past few weeks.

“If the region sees no additional withdrawals, Texas will have ended the winter with stocks only 73.6 Bcf lower than the record-setting seasonal peak in November,” Genscape said. “Entering the summer with such low capacity for injection could make for a very interesting season. North Lansing sits a mere 25 Bcf below its reported working gas capacity. Bammel is similarly positioned with just below 14 Bcf of its capacity available. The summer months will likely prove to be relatively lethargic as overall injections should amount to less than half of those seen last year.”

“A solid withdrawal despite slightly warmer weather, but the market remains structurally undersupplied ($2/MMBtu),” according to analysts with Tudor, Pickering, Holt & Co. (TPH). “On a weather-adjusted basis, we see a market that continues to run 3 Bcf/d undersupplied. With 840 Bcf of current storage overhang, an ongoing 3 Bcf/d undersupply is what the market needs to clear an early November storage capacity cap. As we continue to point out, sub-$2/MMBtu prices should be sufficient to maintain power generation demand to levels to clean-up current storage overhang given normal weather for the balance of 2016.”

However, the TPH analysts said the question remains of once “the storage overhang is well on its way towards being cleaned-up, how hard do prices need to correct upward to balance a market that is undersupplied today? Given our expectations of rising demand and declining supply through 2017, we think the move will be significant.”

Shoulder season weather is in full effect for most of the country as physical natural gas values Friday for weekend and Monday delivery slumped everywhere except for the Northeast, where gains were recorded as much of the region was expected to see one last shot of winter cold over the weekend.

NGI‘s National Spot Gas Average came in at $1.74 on Friday, just a penny lower than the previous day. Meanwhile, front-month natural gas futures, which inexplicably declined following a somewhat bullish storage draw report on Thursday, remained gun-shy of testing the psychological $2 price point. May natural gas on Friday traded between $1.925 to $1.992 before closing the regular session at $1.956, down three-tenths of a penny.

“We gapped higher following the April expiration on Tuesday, but it looks like we filled that gap Friday, which would bring us to $1.910,” said Elaine Levin, vice president of Powerhouse LLC, a Washington, DC-based risk management firm. “I’ve seen a number of stories this week about exports to the rescue and increased demand, which means we could be seeing a low for natural gas prices. I have to tell you though, until we talk summer weather, I think this market is going to have some problems. It is balanced, at best, for the bulls.”

One of those bullish reports this week came from BofA Merrill Lynch Global Research, which said the warmest winter on record in the United States collapsed natural gas prices to the lowest levels since 1999, but by July prices could begin to rise, if “normal” weather prevails and production continues to slide.

In the physical arena, the Northeast made the largest splash on Friday with individual point gains from a little more than a dime to nearly $1.50. AccuWeather.com meteorologist Renee Duff said Friday that a fresh shot of arctic air will usher spring snow into parts of the Great Lakes and Northeast during the first weekend of April. “An Alberta Clipper system diving down from Canada will deliver a round of snow and sharply colder conditions to the northeastern United States,” she said.

“Behind this system, people will be double-checking the calendar as it will feel more like February in places such as New York City, Syracuse and Buffalo, NY; Boston; Burlington, VT; and Portland, ME,” Duff said, adding that “temperatures will fail to leave the 30s F in many northeastern cities on Sunday. Arctic winds, cloud cover, low humidity and other factors will contribute to AccuWeather RealFeel Temperatures in the teens and single digits.”