Natural gas futures dived lower for a second straight session on Tuesday amid warmer weather patterns and the potential for storage injections over the coming weeks. The April Nymex gas futures contract settled at $4.568/MMBtu, down 9.0 cents day/day. May fell 8.5 cents to $4.617. 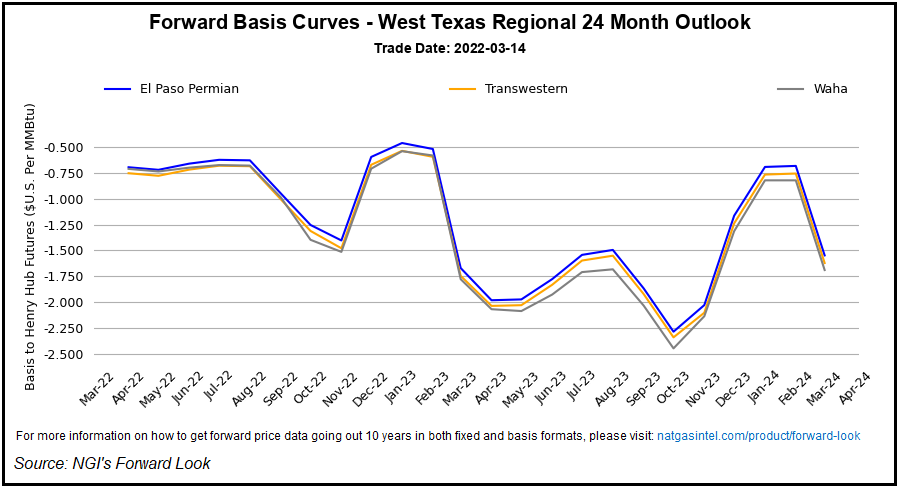 National Weather Service (NWS) data showed pleasant conditions – and modest heating needs – across much of the Plains, Midwest and East on Tuesday.

High temperatures reached the 60s in the northern Plains and the 50s from Minneapolis to Detroit to Boston on Tuesday. Even warmer air was forecast to push East through the week ahead. Warmth spread across most of the rest of the Lower 48.

While domestic weather is king in gas markets, other factors leaned in bulls’ favor.

Most notably, the Russia-Ukraine war, nearing its three-week mark, continued to inject uncertainty in European gas markets and the potential for price spikes.

The European Union (EU) has not followed the U.S. lead and banned imports of Kremlin-controlled energy in protest of the conflict, given the continent’s dependence on Russian natural gas. However, the EU has vowed to wean itself from Russian supplies over the course of this year. With the war intensifying and Western media reports of Russia barraging Ukraine’s capital city with missile strikes Tuesday, markets were watching closely to see if European countries hasten efforts to slash their reliance on Russia. Such developments could cut supplies and drive up prices.

Even with Russian flows of gas intact at this stage of the war, demand for U.S. exports of liquefied natural gas (LNG) to Europe is running hot. LNG feed gas volumes approached 13 Bcf on Tuesday, according to NGI data. Exports levels have held near or above that level – and near capacity – all of March so far.

“With a possible early end to the winter withdrawal season looming, however, the most-likely price risk over the next 7-10 days may remain to the downside,” Rubin added.

Indeed, while analysts expect a storage withdrawal with Thursday’s Energy Information Administration (EIA) inventory report, covering the week ended March 11, markets increasingly anticipate that injections could commence in the second half of this month, Saal said.

“We’re going to be seeing injections soon,” he said. “it’s just a matter of how much people want to put into storage early on.”

Earlier in the month, Nymex gas futures had rallied along with both European gas and global oil prices amid worries Russian crude and gas exports could get choked off from either Western sanctions or by the destruction of war. Brent crude, the international benchmark, reached $130/bbl at one point.

However, Brent prices have since tapered and hung near $100 on Tuesday. The downward shift in crude prices was fueled in part by coronavirus outbreaks in China, the world’s largest importer of crude, and new measures there to slow the spread of the disease.

In response to the resurgence of cases, the Chinese government placed more than 30 million people under lockdown. “You can’t ignore it,” Saal said of the pandemic. “It’s like yet another sequel to a bad movie, and we all know how the earlier versions went.”

The slump reflected expectations for very light demand this week as high pressure spans large swaths of the Lower 48, delivering highs in the 50s and 60s in northern markets and 60s to 80s throughout most of the South.

“The models are in good agreement for a trough to settle over the East, out ahead of which are continued aboves early in the period before cooling toward normal in the second half,” Maxar said.

In the meantime, the firm said, spring conditions will dominate.

In the six- to 10-day period, from Sunday through March 24, updated forecasts as of Tuesday continued to show above normal temperatures from the Midwest to the East, Maxar said.

“This includes much aboves in the Midwest on days seven and eight, and the East at the end of the period,” the forecaster said.